Home Articles Zionist Deviations in Christianity, or How Islamophobia Is Spread
Articles 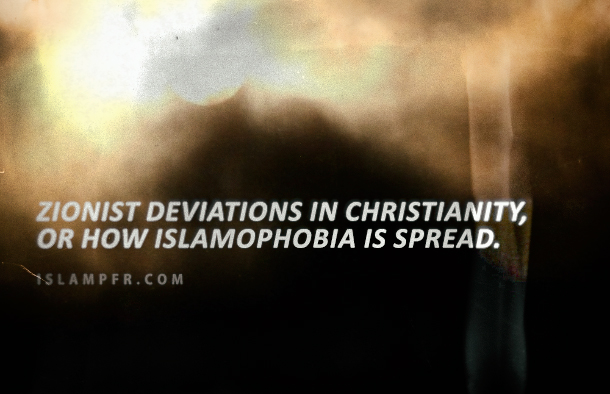 (A necessarily brief discussion of some of the issues.)

The only Holy Book that is free from distortion is the Qur’an. No falsehood can approach it from before or behind it.

Zionism, which is a distortion of the teachings of Judaism, or rather, of the Judaism of the original Torah, has also distorted Christianity since its beginnings, laying the base for the islamophobic sentiments towards Prophet Muhammad and Islam. Attempts have been made since Prophet Muhammad to either denounce Islam as violent, or to belittle it as a “form of Christianity”. Both of these notions could not be further from the truth, of course.

Zionism, distorted Judaism and Christianity regard Islam in a manner not unlike British Parliamentarian Gladstone, who is said to have once stood up in Parliament with a copy of the Qur’an in his hand and to have declared that as long as the Muslims followed this Book, the British could not subjugate them. He advised his people to use every subterfuge to shake the Muslims’ belief in the Qur’an.1

So how exactly has this (re-)sent(i)ment come to be commonplace? The blame lies not only with 20th/21st century mainstream media, but reaches much further back.

Christians are fooled in their belief in “Israel”.

A poll conducted by Pew Forum of Religion and Public Life in July 2006 found that 42% of all Americans believe “Israel was given to the Jewish people by God” and that 35% believe that Israel is “part of the fulfilment of biblical prophecy about the Second Coming of Jesus.” 2 The phenomenon of Christian Zionism is well-known and documented, but this indicates that the belief in the “Chosen People” is very much part of mainstream Christianity. Christian Zionism originates from the belief that Christians are duty bound by the Bible to support the Jewish return to Israel.3 The Qur’an condemns the “chosen people syndrome” of the Jews and the Christians.4

The consciousness of being the chosen people is what gave rise to the ideology of Zionism, an ideology perpetuated both in distorted Judaism and Christianity, which followed on from this deviation. Zionism has deep roots in the Christian tradition that predates modern Jewish Zionism.

“The Jews considered themselves a superior race, and they remarked that they were the Children of Allah…this dangerous pride and self-admiration, like a curtain, covered over their eyes and ears.”5

What does distortion mean?

It means to alter any word in Divine Scriptures intentionally.6  From the very beginning, the sons of Israel paid little attention to Allah’s Word, the Torah.7 Jewish scholars not only interpreted the Torah parallel to their own understanding…(they) also added the texts they approved and removed certain parts…those additions and deletions made the real Torah unidentifiable.8 Christian priests did much the same, adding their own interpretations and ideas about Allah’s Word, the Gospel. In doing so, they made that Divine Book almost unrecognizable. They especially distorted the verses about the prophethood of Muhammad (PBUH), and tried to destroy the verses of the Scripture which gave the good news of the coming of Prophet Muhammad (PBUH) after Prophet Jesus.9

Certainly they disbelieve who say: “Verily Allah is the third of the three, while there is no God save the One God; and if they desist not from what they say, a painful chastisement shall befall those among them who disbelieve.

Some technical aspects of the distortion of Christianity and Judaism

The Christian Bible, though incorporating the bulk of the Jewish scriptures into its Old Testament, drastically alters the order in which they are arranged.10

It is somewhat difficult to accept that God should have stressed upon His Unity in His teachings conveyed to all Prophets from Noah to Abraham and up to Moses, and then from Moses to John the Baptist, and then should become a Trinity for some time, and then should disavow His Trinity in the Book revealed to Prophet Muhammad (saws).11 Muslims consider the Christian doctrine of Trinity as a relapse into polytheism on the part of the Jewish and non-Jewish followers of Christ.12

The Qur’an’s narration about the events surrounding the birth of Jesus (PBUH) is in fact more respectful than the narrative given in the Bible. Whereas in the Bible, Mary is depicted together with her husband at the time of the birth, in the Qur’an, she is all on her own at the time of the birth, and unmarried, a virgin. This protects the Prophet’s sanctity, in comparison to the Bible, in which the events are in complete contradiction to the Prophet’s divine personalities.13

Jesus had attacked the partial and selective practice of the Law by the Jewish priests, who ignored the teachings of paramount social significance such as justice, honesty and mercy. 14 In fact, Christian scholars of Islam have striven to diminish the Muslims’ respect for his law and scriptures.15

Discussions by Imam Riza on Prophet Jesus (peace be upon him)

Imam Riza said that the fact that Jesus worshipped a lot shows that he was not God and he was a slave of God.16 This is confirmed in a statement made by a Catholic Archbishop, “Jesus never broke his fasting by day and never slept at night. He always fasted during the day and prayed at night.”17

This of course addresses the deviation in the Christian doctrine of the Holy Trinity, which is essentially a form of polytheism. If Prophet Jesus was continually engaged in worshipping of God, how can he and God be the same?

This is the crux of the matter. How can one put forward a Book of Faith as uncontroversial and indisputable when it has been out of safekeeping, even if only for a day? Who would have had complete knowledge of the entire Bible after all, word for word, chapter by chapter, in the correct chronology? Imam Riza (PBUH) sums up the grave consequences of this failure to safeguard the Bible when he says, “How little your knowledge of the Bible and its scholars is! If what you say is right, then why is there so much dispute amongst you with each other about the Bible? The reason is that there is controversy in the Bible which is in your hands today. Had it been the first Bible, there would be no disputes over it.”19

Is it the case that these deviations have contributed to the relative lack of commitment to their faith as exhibited by many Christians, and especially by Jews? Having as one’s creedal Book a book that has possibly been altered in content and chronology is not a solid foundation for a community of believers. No wonder then that Muslims exhibit a belief in God at around 95% in surveys. This is of course the endgame of Zionist deviations, as Zionism believes in no Abrahamic God, and instead seeks to have humanity worship at the altar of greed, materialism and egocentrism. Zionism is the deviated interpretation of the word of God, a movement of hypocrites and unbelievers who live in fear of the unadulterated teachings of Allah in the Qur’an, which is surviving century upon century. The deviated Torah and the deviated Bible are steadily losing their followers.

“No Christians, since the early ages, or only perhaps the English Puritans in modern times, have ever stood by their faith as the Muslim do by theirs, – believing it wholly, fronting Time with it, and Eternity with it.”20

5 Imam Ali Foundation Publishers, An Enlightening Commentary onto the Light of the Holy Qur’an, Vol. 4

10 Gabriel Josipovici, The Book of God. A response to the Bible.

17Uyun Akhbar ar-Ridha Volume 1, ch. 12: A Session of Al-Ridha (a.s.)’s Debate with Prominent Theologians from among the Rhetoricians and The Various Religions.

20 Thomas Carlyle, On Heroes, Hero-Worship, And the Heroic in History (Lecture II. The Hero as Prophet. Mahomet: Islam; May 8, 1840)