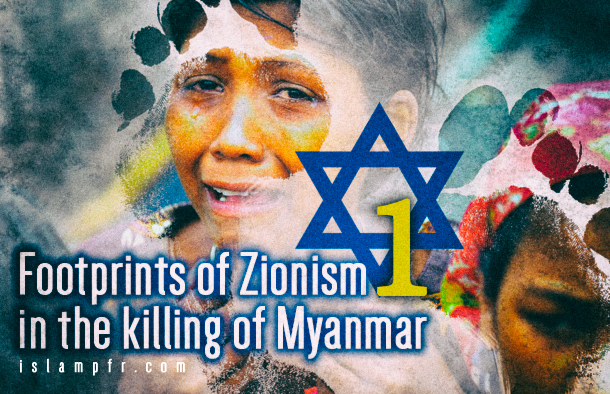 Genocide, however, is as old as the formation of basic human communities and it is for centuries that it has affected civilization and cultural achievements of humanity, but due to the expansion and development of military equipment in the past one hundred years,the depth of genocide disasters have increased and concerns about the consequences of genocide massacre of human beings, just because of having a particular racial, ethnic, linguistic, or religious identity, have doubled.

The first time was in 1938 when one of the Muslim Clergymen in Myanmar spoke words of incitement against Buddhists which caused ethnic conflict in the country. With the arrival of the police and two Buddhist being killed, media widely reported the incident, which led to the burning of houses and property of Muslims and mosques and mercilessly killing of them by Buddhists in the country.

About 10 years later,in 1974, Myanmar’s military regime passed a new law that changed Myanmar’s name to “Socialist Republic of the Union of Myanmar” and after that Muslims were actually introduced as foreigners and illegal residents and all their assets were seized and they were banned(dismissed) from public(governmental) employment and their citizenship rights were fully deprived and denied by Myanmar’s military regime.

Along with the green light of Hillary Clinton to the Myanmar government for the mass killing of Muslims which was given instead of getting allowance for expansion of American military bases in the country, in 2012, another massacre took place.

The beginning of story was in May 2012 in which 11 innocent Muslims were killed by the military. After news spread that a Buddhist woman was raped by three Muslim men and killed. The three men were arrested, one of them died at the military prison and two others were executed. In June, Buddhists attacked a bus carrying Muslims. This time a Buddhist died.Then Buddhist extremist militias named “mug”, invaded Muslim areas in Rakhine state, and fired up more than 20 villages and 2,000 houses. Some reports indicate that up to 20,000 Muslims were killed and more than 5,000 women were raped in the country. On the tenth day of June, Mr.TheinSein, the president of Myanmar declared the state of emergency in Rakhine state. Then extremist Buddhists attack on Muslims, backed by army, started; 1,000 innocent Muslims were killed, 500 injured and 300 people were kidnapped.The killing still continues. However, since the government does not allow journalists to attend the Rakhine region, no one is aware of the scale of the disaster. Of course there are images on the Internet, to narrate harrowing scenes. Slaughter of women and children and showing hundreds of burned bodies in the courtyard of a school are among such scenes and images.Interestingly! There is no reflection of disaster by any international organization. To resolve quarrels and problems between Muslims and Buddhists and Muslim .Myanmar government applied the policy of forced displacement of 6 million Rohingyas Muslims from the Arakan region. Through this policy applied by the government nearly 150 thousand Muslims in Arakan to migrated Bangladesh, 50 thousand migrated to Thailand, 40 thousand migrated to Malaysia and significant number migrated to other Asian countries. In the last assertion of Myanmar president it is stated that 800 thousand of these people(Muslims) should be expelled from Myanmar to end tensions. It is said that the military forces of Burma (Myanmar) helped the strikers, and the slaughter is being done with no reflection in the news media and silence of the United Nations.

The killings were carried out by Buddhists whose infrastructure of religion is avoiding the rancor and deceive others, as stated in the context of scripture “Dhammapada”:

Hate can never be destroyed by hate and hatred can be overcome only by love. (Song 1, paragraph 5)

The astonishing thing is that how, moral Buddhist that believe in Sydarta (Buddha) upto worship, and have accepted these tips in their lives, do such horrible crimes that is not expected to be done by humans. In this article we scrutinize traces of the Zionists in this disaster and the misuse of Buddhism. Their goal is nothing but only to destroy Islam and it is clear that how the provocations are fed, and Buddhism is a plaything in the hands of Zionism to destroy the Muslims and history is proof of this statement. First the creation and development of Buddha is mentioned and then we investigate misuse of these religions by Zionism.

Introduction to Buddhist and their ideas

“Shakyamuni Buddha” was born 25 centuries ago in northeastern India. His real name is Sydarta. He was the son of the Shakya tribe head and was a life lived in opulence in the palace of his father until seeing aging, sickness, death and a pious person who lived in misery; he decided to search for the truth all day. After years focusing and being away from the pleasures of the world he proposed his four basic principles in a speech. These 4 principles are accepted as 4 Noble Truths in Buddhism and are as follows:

In this religion for the realization of 4th principle, 8 other principles have being established, which are known as 8 practical principles in Buddhist texts.

In this religion, the concept of God (the Creator) does not exist. Any curiosity and research in epistemology and ontology is a waste of time and Buddha himself has not talk about the answer of these questions. In Buddhists look there is no fixed fact and base in the universe and everything is changing.

The goal of Buddhism is reaching nirvana (nirvana: world peace and relief from suffering, absolute space, a kind of darkness that is out of area of knowledge. They believe that, if the mind data are stopped and the data that come through our five senses becomes zero, we have reached nirvana, which is the goal of Buddhism. Today one billion people in the world believe is nirvana. Nirvana is everything for these people, because they don’t believe in God, resurrection and unseen world.

The way to nirvana is meditation. Most distribution of this religion is in the areas of Tibet, Central Asia, China, Korea, Japan and Sri Lanka. The largest populations of Buddhists in the 2005 statistics are as follows, Thailand 95%, Cambodia 90%, Myanmar 88%, and Taiwan which has the lowest Buddhists in these areas is recorded with 43%.