Home Articles Wudhu according to the traditions of the Prophet Muhammad (PBUH), Ahl al-Bayt, hadith
Articles

Wudhu according to the traditions of the Prophet Muhammad (PBUH), Ahl al-Bayt, hadith 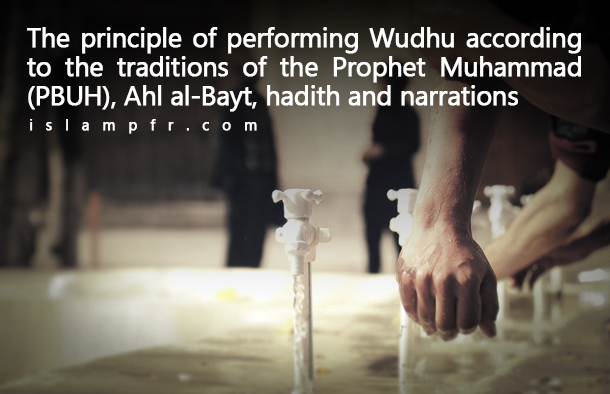 The principle of performing Wudhu according to the traditions (Sunnah) of the Holy Prophet Muhammad (PBUH), Ahl al-Bayt, hadith and narrations.

Quotation with authentic documentation Hadith in the Sahih book:

The method of the Holy Prophet Muhmmad(PBUH) for performing Wudhu:

Abde Khair narrated from Imam Ali (PBUH) that he said;

“I supposed that it is proper to rub the sole of the feet rather than its upper surface, until I observed that the Holy Prophet (PBUH) was performing rubbed the upper surface of his both feet”.

Nazal-ibn-Sabreh said: “Imam Ali (PBUH) performed the prayer of the noon in the Kuffah square. Then He sat down to solve the people’s problems to the time of evening prayer. They brought him a bowel of water for Wudu, he poured a handful of water on his face than washed his hands and rubbed his head and feet and said ‘I saw Holy Prophet (PBUH) performing wudhu in this way’ [means Holy Prophet(PBUH) used to rub his feet]”.

The book researcher named Doctor- Muhammad- ibn- Abdul- Mohsin- Alturki has commented in the footnote about this quotation:

It is an authentic quotation.

Hakim related this quotation, in his book, Mustadrak, with authentic citation:

Rufai- ibn- Rafee one of the companions of the Holy Prophet (PBUH) narrated that the Holy Prophet Muhammad (PBUH) said “None of your prayers are accepted, until you perform Wudhu as God ordered you to. Wash your face and hands up to elbow and rub your head and feet”.

Abdulrazaq- Sanaani related in his book, Musannif, with authentic citation that Shaabi said:

“But Gabriel rubbed his feet during Wudhu” [i.e. there is a Quranic reference for rubbing feet in Wudhu].

ibn-Kathir relates from Anas-ibn-Malik in his book, Tafsir:

When Anas was living in Kuffah somone told him that Hajjaj says to wash entire feet in Wudu.

When Anas heard of this he got very angry and said:

God is truthful and Hajjaj is a liar and God has ordered to rub feet in Wudhu.

And then in comments of this hadith, ibn-Kathir wrote that above narration was authentic.

And he continued that the order of the Holy Quran was to rub the feet.

… Our judgment is that the order of the holy Quran is to run on the feet for Wudhu. The lord said:

The order about the head and feet are the same. Whether we assume “feet” as “object” or “possessive”, it is in conjunction with the “Head” and it is not permitted to separate two words which are in conjunction.

and it is related from ibn- Abbas that Quran ordered us to rub our feet in Wudhu, and many other narrators like Imam Ali (PBUH), ibn- Abbas, akramah , shaabi and many more including Tabari believed that we should rub the feet in Wudhu …

This famous great Arab Sunni scholar, was a Jurisconsult (Faghih) and Mujtahid and he said:

Anyway, in the verse the “feet” are in conjunction with the Head and it implies that we should rub the feet.

When a great Sunni scholar whose native language is Arabic, and knows the Arabic grammar very well, says that this verse refers to rub the feet and not washing it, then the question arises that why do other scholars perform otherwise?

Shams-ul-Din- Zahabi writes down in the biography of ibn-Hazm- Andalusi;

He possessed high ranks in Islamic knowledge and was regarded as a unique personality in Islam.

An authentic narration with definite citation in the book, Osul-al- Kafi, on of Shia references