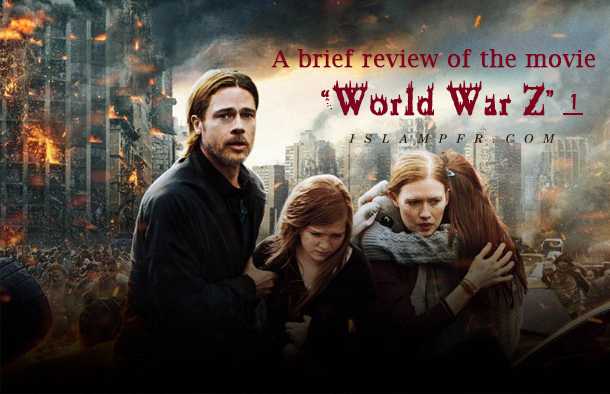 In Philadelphia, everything was as usual until suddenly the audience get surprised by the incursion of wild humans who are running quickly and attacking. It becomes clear that these men were infected by a certain type of virus and as a results have acquired inhuman characteristics. The name “zombie”, is a well-known name which has been used previously in several movies and games.

Zombies attacked the people of Philadelphia and by biting them they make another zombie within 12 seconds. The duration of transformation of the humans into the zombies is so fast that there is no time for any reaction or running away.

The leading man of the movie, Gerry Lane, is a former investigator of the United Nations who has spent many years of his life in the countries which are involved it war and conflict, but for dealing with his family issues and the problem he faced in his job in the UN, he left the job forever.

Soon, the audience will encounter a world that is captured by zombies and Gerry Lane, the investigator of the UN is summoned for the service because of his specialty. The service which is beyond his personal problems with the UN, thus immediately he accepts the cooperation with the UN.

His dependence on the United Nations evokes the sense of being neutral and independent in the viewers.

He leaves Philadelphia for Newark, New Jersey where he and his family are taken to the aircraft carrier far from the coast by rescue helicopters. There, a deal is offered to him: if he accepts to cooperate with an epidemiologist and his secret team in finding the patient “zero”,  i.e. the first person who has caught the disease, he and his family members can be safe forever on the aircraft carrier. Then he gets on the military helicopter to go to South Korea.

He is clearly investigating how the virus was created and how it is spread all over the globe.  South Korea, is the first place where the existence of the zombies has been reported, but there is no significant point in South Korea, except a weapon dealer who had a connection with the CIA and had been selling weapons to the North Korea, and now he is apprehended by the UN soldiers. The dialogue between Gerry Lane and him may be the summary of the movie when Gerry asks:

Man: They sell the virus to all of their advocates.

Gerry: Why’d you sell guns to the North Koreans?

Gerry: Are they surviving this?

Man: Indeed they are.

Man: Guns are useful; they have influence.

Man pulls off the last remained tooth in his mouth with difficulty from the root and says: “They took the anatomical power of zombies, they beat all 23 millions in less than 24 hours.”

The greatest feat of social engineering in history. It’s brilliant. No teeth, No bite, No great spread.

Man: Why do you have to burn them to ashes to get them to finally stop?

Why do they move like a plague? Why is the Israel winning?

Gerry: How is Israel winning?

Man: They sealed off their entire country. Days before the zombies attacked men.

First to know, first to act.

Gerry: People have been building walls there for two millennia.

Man: Yes, that’s over, all those thousands of years of work finished a week ago. Impeccable timing is all.

Then he introduces Jurgen Warmbrunn to Gerry to meet him in the Jerusalem and find his answer.

Warmbrunn thought the cause of erecting the wall was a rumor at first, but when he investigated the matter, he found out that it was true. He heard about zombies in a communiqué by Indian army for the first time.

On the way of visiting the Israeli West Bank barrier in Jerusalem, he tells Gerry that Jews never anticipated  that they might end up in Nazis force labor camps in 1930 or might get massacred in the 1972 Olympic games or even they didn’t believe the Arabs’ war against Israel in 1973, although they  had observed  the Arabic armies movements.

But this time, learning from the possible dangers, Warmbrunn, a Mossad employee of high rank, detects this danger, builds the West Bank barrier of Jerusalem as a way out of to save Israel.

Then, he takes Gerry to a house, to see the security walls of Jerusalem form its window.  High walls and strong constructions which are as strong as the current west bank barrier in the occupied Palestine.

These are the way out and the solid walls of Jerusalem, two of the most secured ramparts of Israel, Warmbrunn says.

Watching the people who have Islamic and Arabic appearances enter the city, Gerry asks: “Do you allow people to enter?”

“Every person we save is one less zombie to fight”, Warmbrunn says.