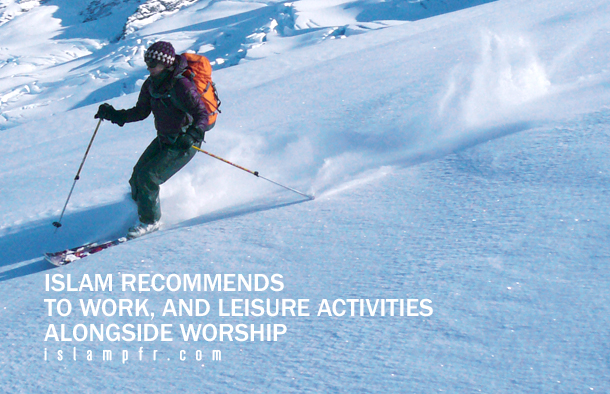 work , and leisure activities alongside worship

There are some narrations which deal with this subject in Islam. One of the narrations that Al-Shaykh Al-Tusi (d.460/1067) has quoted in” AL-Amali” is: Imam Ali (PBUH) told his son:” [It is  a virtue] for a believer to have  his time divided into three parts: a time  for worshipping the God, a time  for earning the living expenses and a time  for enjoying the halal and good pleasures.

There are similar narrations quoted by The Prophet Muhammad (PBUH) and other Imams which don’t have irrational concepts, because obviously, nothing can be done without a proper planning. Therefore, Imams were always striving to help Muslims attain a divine discipline in their lives. Having discipline in everything is a virtue of a believer. Relevantly, it is stated in narrations that it is not possible to achieve perfection without having discipline.

According to Quran (AL-Muzammil: 20), dedicating one third of the night for worshipping is sufficient: “Indeed, your Lord knows, [O Muhammad], that you stand [in prayer] almost two thirds of the night or half of it or a third of it, and [so do] a group of those with you. And Allah determines [the extent of] the night and the day. He has known that you [Muslims] will not be able to do it and has turned to you in forgiveness, so recite what is easy [for you] of the Qur’an. He has known that there will be among you those who are ill and others traveling throughout the land seeking [something] of the bounty of Allah and others fighting for the cause of Allah. So recite what is easy from it and establish prayer and give zakah and loan Allah a goodly loan. And whatever good you put forward for yourselves – you will find it with Allah. It is better and greater in reward. And seek forgiveness of Allah. Indeed, Allah is Forgiving and Merciful.”

It should be noted that in this time division it is not necessary to divide your time exactly into three equal parts, and according to the condition and situation, it is possible to reduce the duration of one interval and increase another.