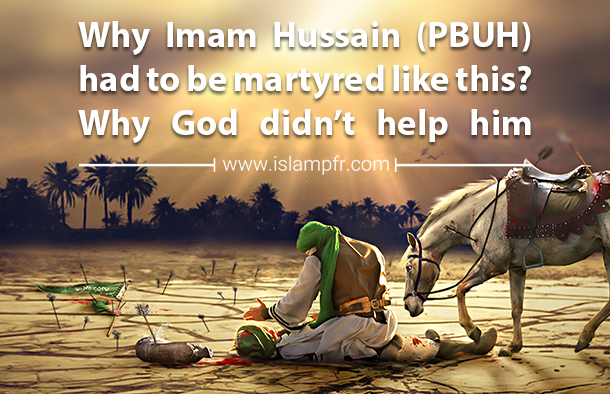 Why Imam Hussain (PBUH) had to be martyred like this? Why God didn’t help him out?

Greeting and thanks to you dearest reader

First of all, it’s God’s will that human beings possess free will on the earth and choose what they want to do.

Hence, the cruelty done to Imam Hussain (PBUH) and his companions was due to the will of some brutal people.

So it’s them whom we should ask how and with what cruelty could you do such horrible things?

And second of all, since this world is a place of test and trial, and a mean to recognize the right and wrong, and the pious and sinner, God’s will is that the world is run based on the embedded rules and orders rather than miracles.

The goal of preserving Islam from distortion and neglect, and exposing the true character of Yazid and his followers were accomplished only via this event and nothing else.

In conclusion, those vicious wicked people forced that great pain upon Imam Hussain (PBUH), and he saved Islam from destruction and transferred the religion of his exalted grandfather to the next generations by being obedient towards the Divine destiny.

Click here to read the PDF file
You can read this article in Arabic.