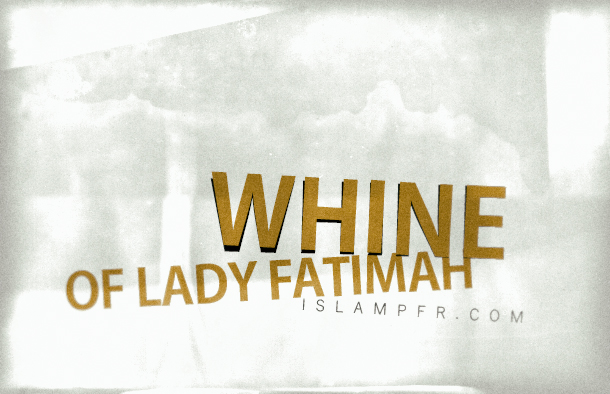 “Whenever I look at Fatimah, and remember the incidents and tragedies which will occur to her after me, it seems as if I see the distress enters her house and she will be disrespected and her rights will be usurped and she will be prevented from achieving her honor and her side will be hit and her child will get aborted, she cries out: “Oh Muhammed!”

She asks for help but no one helps her, she will be always sad and depressed and tearful after my death, sometimes she will remember that revelation is disconnected from her house, and she will remember at a time when I`m gone, and she gets fearful at mid night due to not hearing me reciting the Quran during the Night Prayer as she always used to hear, then she finds herself heartsick and worrisome while she used to be precious during her father`s time, at this time God will assign angels as her companions, angles will talk to her as they used to talk to Lady Mary (PBUH) and the angles tell her:

Afterwards, it seems that I see her becoming sick and weak, in need of a nurse, then God sends Lady Mary (PBUH), the daughter of Imran (PBUH) in order to look after her, then she prays to God this way

“Oh God! I am fed up with life and the worldly people make me depressed, reunite me with my father.”(1)

God will reunite her with me, she is the first member from my Ahl-al-Bayt to join me while she is sad, distressed and dispirited and her rights are confiscated, and she has been killed, then I say to God: “Oh God, take away your mercy from those who oppressed her, punish those who confiscated her rights, disgrace those who distressed her, keep those who hit her side and killed her child in the fire of hell forever.”

According to the verse 82 of the Surah Al-Maeda “Surely You will find the most hostile of all people towards the faithful to be the Jews and the polytheists”.

By the infiltration and instigation of those hypocrites who apparently converted to Islam in Muslims‘ triumphs, they developed a course of actions with the intention of governing the world. In the verse 54 of the Surah Al-Maeda, God says:

“O you who have faith! Should any of you desert his religion, Allah will soon bring a people whom He loves and who love Him”

“This verse conveys the apostasy of the Jews and then Divine promise was taken away from them.” (3)

But the Jews did not believe this, as it is revealed from the verse 64 of the SurahAl-Maeda:

“The Jews say, ‘Allah’s hand is tied up.’ Tied up be their hands, and cursed be they for what they say! Rather, His hands are wide open: He bestows as He wishes.”

As the verse 67 of the Surah Al-Maeda says, what was revealed to Prophet Muhammad (PBUH) which caused their rebellion was the guardianship of Imam Ali (PBUH). This means sovereignty of Islam and an all-out and powerful battle against Imam Ali (PBUH) and his supporters.

Since Prophet Muhammad`s (PBUH) instruction to Imam Ali (PBUH) is silence and patience, therefore; the most political lady of history is assigned to continue the mission.

With an incredible sagacity, she initially brought up the issue of “Fadak”; because if she could prove that she was rightful in this case, then, as a result, the sparks of governing regime’s illegitimacy could be ignited.

By virtue of the verse 26 of the Surah Al-Isra “Give the relatives their [due] right”, she created a movement insofar as she could prevail over the governing regime.

Now, it was the time for the next phase of the mission. Prophet Muhammad`s daughter took an important step to suppress the sedition.

Lady Fatimah (PBUH) becomes bedridden at home because of her wounds. (4)

Women of Muhajirun (The Emigrants) and Ansar (The Helpers) came to visit her and asked: “Oh daughter of Prophet Muhammad, how you survive day and night with such sickness?” (5)

Pay attention to the intelligent, illustrative and futuristic reply of Lady Fatimah (PBUH):

After praising God and saluting her father, she said:

“I swear to God that I spend day and night while I am dissatisfied with your world and hateful of your men, after  realizing their bad intentions and improper actions I left  them all and … .

Stay vigilant and listen carefully! Soon; life will reveal its wonders to you; may they become disgraced “those who suppose they are doing good” (6) and “Look! They are themselves the agents of corruption, but they are not aware” (7).

I swear to my life, that your behaviors have consequences which you will know at its appropriate time, be prepared for incidents and sedition and crisis! And make yourselves ready for the decisive sword and the tyranny of oppressors.”

Women trembled out of fear and made their men aware.

After her strong speech, men of the Emigrants and the Helpers hastened towards her house, Lady Fatimah (PBUH) said: “Get away from me, nothing will reduce your guilt and delinquency.””

It can be understood from this event that tears and whining of Lady Fatimah (PBUH) did guide the people of Medina towards vigilance.

The leaders of the sedition heard in mosque from Imam Ali (PBUH) that “If I had 40 comrades, I would have retrieved my rights” and they felt fearful that frequent visits of the people to the house of Lady Fatimah (PBUH) will make them aware, therefore; they commenced to plan another scheme.

They delivered the message to Imam Ali (PBUH) that “Tell Fatimah to cry out either during the day or at night!”

Since no one like the leaders of the sedition was aware of the bright influence of these tears.

“And the wrongdoers will soon know at what goal they will end up.” (8)

The criticism on the Masonic Pyramid