Home Articles Wahhabism against Islam, a tool for Zionism
Articles 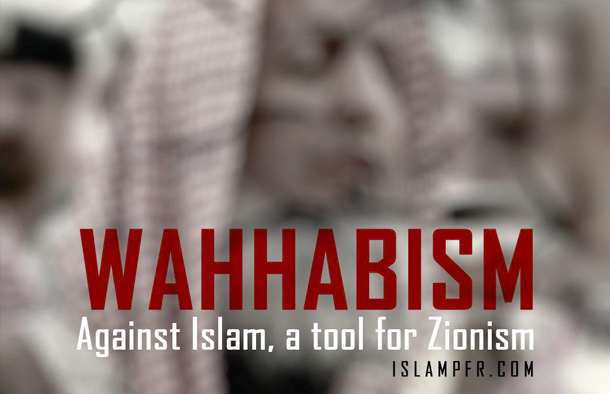 Wahhabism against Islam, tool for Zionism

Though most of the people consider Wahhabism as a branch of Sunni Islam especially in the West, the reality however is contrary. Wahhabism is a hardcore Islamic ideology which claims to return to the earliest Islamic fundamentals of Islamic sources of Quran and Hadith.

They get their ideologies directly from Quran and Hadith and reject the existence of any medium between the believer and the source. In Sunni and Shia Islam there must be religious scholars to interpret the Quranic verses and Hadith. Because a single Quranic verse may hold different or multiple instructions, it may have a time factor in it so such a verse can’t be directly applied as law unless or otherwise properly interpreted in the light of Hadith, logic and Islamic history.

To do this one must have proper knowledge of Hadith, Mantiq (logic), history and even social sciences. This different way of getting instructions directly from the Quran (the main source of Islamic ideology) and every individual’s being able to interpret the Quranic verses puts Wahhabism far away from both Shia and Sunni schools of thought. I mentioned this ideological difference because it has something important to do with today’s onslaught on Shia Muslims across the Muslim World.

According to Wahabis believes, Shias are non Muslims, they commit Bidat (creating something new in Islam outside the Quranic teachings) and Mushrik (believe in more than one God). As per their law, it is legitimate to kill Shias irrespective of their gender and age. With this extremist ideology they have been persecuting Shia Muslims for decades.

The Western hegemony, powered by Zionist money was keen to take advantage of this ideological rift and it did so. The powerful military wings of Wahhabism i.e. al-Qaeda and Taliban were created and funded to bring about bigger political changes in the Muslim World. Saudi Arabia, Israel and some Eastern and Western countries have been working in close cooperation to shape the Muslim World in a way where there would be no place for Shia Muslims to live.

In fact each party has its own set of interests in formulating such a mechanism against Shia Islam. When it comes to West we mean the United States first. And it is in everybody’s knowledge that America has long been hijacked and politically invaded by Zionists. Their domestic and foreign policies all must be verified by the Israeli lobby before they are finally passed.
Shia Islam is the main resistance against Zionism.

Shia Islam is the main resistance against Israel’s illegal existence, Whether it is Hezbollah fighting face to face with the forces of occupiers or Iran politically defeating the Zionist regime and its allies at every platform, showing the World the true face of Zionist entity. It is the Shia Islam which is fighting the enemies of Islam and Muslims.

If Western hegemonic powers and the Zionist regime of Israel fear anything on their way to their dream of greater Israel, it is Shia Islam which is the obstacle. After the shameful defeat of Israel in 2000 and 2006 in the hands of Hezbollah, Israel has intensified its proxy wars against Shia Muslims around the Muslim World. And her sister Saudi Arabia is putting her all out efforts to power these proxy wars politically, morally and economically.

Saudi Arabia and her shameful ideology have been working as a tool for the enemies of Islam and humanity. Whether it is Syria, Lebanon, Iraq, Pakistan or Yemen, the Saudi grown wild animals have been butchering Shia Muslims, killing innocent children and women in the name of Islam. The atrocities which this family regime has committed and is still committing against Shia Muslims in Pakistan have never been seen in the history of humanity.

Wahhabism and Zionism are sister ideologies. Two historical hijacks have changed the World political arena in a complex and dangerous way, the hijack of America by Zionists (Israel) and the hijack of Islam by Wahhabism. Wahhabism aims to defame Islam and display it as a terrorist ideology to the rest of the World especially the West. Zionism aims to defame Christianity and Judaism and display them as warmongering ideologies.

If one slaughters other fellow Muslims for practicing their religious believes, the other bombs the fellow humans to leave their own homeland. They don’t have each other’s embassies in their states yet they work in close cooperation. They don’t accept each other’s legitimacy as a state in public yet have perfectly mechanized intelligence sharing.

Every cloud has a silver lining

The Wahabis and Zionist bluff has taken the lives of millions of Muslims, Christians and Jews. In the recent years, Wahhabism has been greatly exposed in the Muslim world mainly because of its own heinous crimes against humanity and its aliens to the Zionist entity and all its supporters.

Most of the Muslims who were badly confused by this Saudi version of hardcore ideology, especially Sunnis, are now becoming more and more aware of the true black face of Saudi regime, her decades long propaganda against different Islamic sects mainly the Shia Islam which is a sign of demise and downfall of Wahabis propaganda.

In the same way, the recent false flag war propagandas formulated by the Zionists against Syria, and their failure due to the lack of political and public support in the United States, Britain, France and all over the World is a clear indication of demise of the Zionist propaganda machine.

The important thing to remember.
A] All Jews are not Zionists.
B] All Zionists are not Jews
The same applies to Wahhabism
A] All Muslims are not Wahhabis
B] All Wahhabis are not Muslims

Its all about Power and Control

Can spmeone answear question for me. Is it true house of suad wahhabbis are jewish origin. I Korean american.