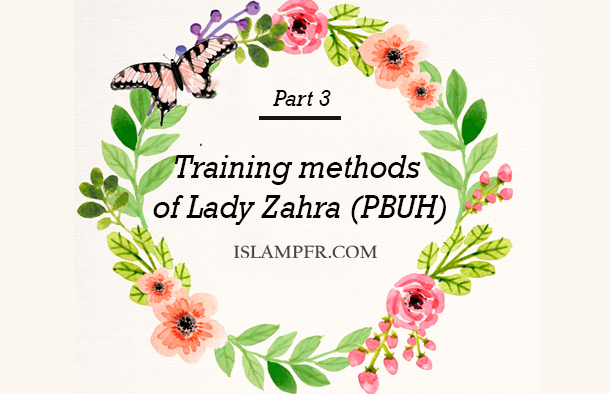 Prioritizing other people’s needs over one’s own in order to help them out- which is one of the most significant and valuable humanitarian principles of teachings in our religion- is attributed to Lady Zahra’s family in the 76th chapter of the Holy Quran. The beginning verses of this Surat, is about the story of this family’s three days of fasting and giving their own food to the poor people which shows this noble family’s supreme sense of sacrifice and perseverance. This way of modeling for children bestows on the society the children like Imam Hassan, Imam Hussein and Lady Zeinab (Peace Be upon Them), in addition to flourishing the human nature of forgiveness and sacrifice in the child, gives him/her the sense of cooperative donation.

Another significant dimension of Lady Zahra’s (PBUH) lifestyle is her entire obligation to modesty, hijab, and purity which influenced her children’s manners significantly. Her using of hijab in the presence of a blind man, is one of the greatly known examples in this regard (ibid, p.91).

Many examples can be mentioned for the sake of model making from Lady Zahra’s (PBUH) lifestyle from different aspects of life: worshiping, individual, social and familial ones all of which are beyond the scope of this article, and generally speaking it should be said that individual edifying of parents is one of the basic training principles in Islamic viewpoint; since children, due to their natural features, are always modeling themselves on their parents, primarily their mothers and then their fathers. Therefore, after some time, parents usually see their own behavior done by their children. In the comprehensive model of Islam on training as well as in Lady Zahra’s (PBUH) lifestyle this very important and fundamental aspect has been seriously practiced.

It is said that Lady Zahra (PBUH) used to preach her son Imam Hassan (PBUH) in the form of nursery rhymes while playing with him: “Oh, my son, Hassan! Be like your father; separate the rope of truth from that of tyranny. Worship the God who owns various blessings and never befriend those who are tyrant and cruel” (Ansari, 1372, p.89). In addition to referring to the training method of preaching, these words indicate preaching for children must be in the form of sweet words and while playing. The content of this rhyme also shows the Lady Zahra’s (PBUH) deep thinking, in treating her children. Form their very childhood, she encourages her children to oppose injustice and seek justice and flourishes their humanity.

As it was mentioned in the previous part, Lady Zahra (PBUH) uses the language of poetry to teach her child the grand concept of opposing injustice and by using this method she helps her child in realizing its importance.

It is said that Lady Zahra (PBUH) used to encourage her children to perform prayers and speak to God and also formed this habit in them in practice. On the 23rd night of Ramadan, she made them stay awake and she had plans for the night in a way that she used to be careful about the child’s sufficient sleep and rest during the day so that the child could benefit from the spirituality of the night and get used to worshiping and observing the night (Ibn al-Hayyun 1385 vol.1 p.282).

This method which is seen in all the Ahl al-Bayt’s training lifestyle, is rooted in the Prophet Muhammad and Lady Zahra’s (Peace Be upon Them) verbal and practical lifestyle, considering children. There are some narrations about Lady Zahra’s (PBUH) forming an emotional relation with her children by embracing, smelling and kissing them (Nilipour, 1387, p. 180-182). Even in her will, Lady Zahra (PBUH) asks Amir al-Mu’minin (PBUH): “After me, marry my niece Omameh since she is very kind to my children” (Majlesi, 1403 A.H. vol. 43, p.193).

It was mentioned that training is a purposeful planned program to develop and actualize the potential talents of human beings. Training, based on the two views of Islam and the psychology of modern age, differs fundamentally regarding features, definition, purpose, scope, pivots and characteristics of training and also the methods of training. To answer the primary and secondary questions of this study, it should be said:

1384, the basics of the psychology of Hill Gard, Tehran, Roshd

Rafie, Behrouz, 1391, the views of Muslim Scholars in Education and its Basics, Tehran, Samt

Kardan, Ali Muhammad and colleagues 1380, A Preface to the Islamic Education (1), Tehran, SAMT