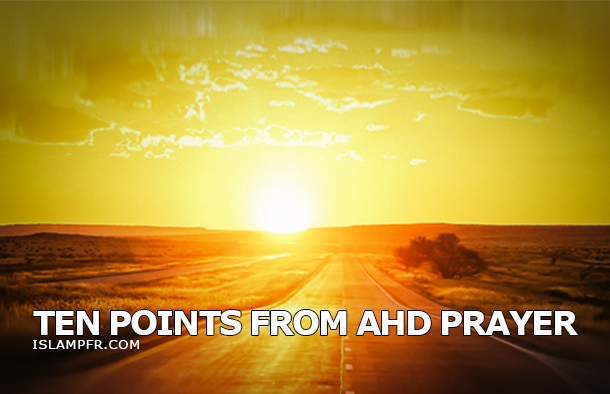 Ahd prayer is a prayer aiming to form a connection between Imam Mahdi (PBUH) and us. In this prayer, we pledge allegiance to that Imam and we promise to do certain things and make preparations for establishing his Mahdavi government of “Justice”. This prayer acts as an illuminating guide for our activities.

We say in the “Ahd” (convention) prayer that: “Convey (our salutations) to our Master- Imam Mahdi- the Guided, the Upriser in your command- the Salutations of Allah be upon him and his Pure Fathers, from all believing men and women .” Convey to Imam Mahdi (PBUH) from whom? “from all” faithful men and women. That is an important point itself.

This boundless love in Ahd prayer is understood through these phrases: “فِي مَشَارِقِ الْأَرْضِ وَ مَغَارِبِهَا”  in the east and west (of the earth) ‘وَ سَهْلِهَا وَ جَبَلِهَا”  in flat and mountainous lands, “وَ بَرِّهَا وَ بَحْرِهَا” in the sea and on earth.   See, how constructive this prayer is. What significance is there to explain about oneself or to introduce oneself? These phrases are inclusive. All (creatures). Seas, lands, plains, mountains, the east the west, an affection without borders. This is very beautiful.

In Ahd prayer we ask Allah to send greetings and blessings to Imam Mahdi (PBUH) on our behalf and on behalf of our parents; that is (we consider the) past generation as well as the current generation.

This is like calling a person to say “I love you” to them every day. We say in the prayer that: “O God, I renew my allegiance for today and all the days to come.” Dear Mahdi, I “renew” my allegiance to you today and every day.

Ahd means convention (promise). In Ahd prayer we send our greetings and blessings to the Imam, which are some kinds of commitment. That is we make a promise to the Imam in the presence of God and then we strengthen it by sealing the promise.  Two people may promise each other something but they may not become intertwined. Pledge or sealing refers to form a bond.  One might promise, and seal it but he may not submit. When one says “allegiance” it means he is submitted, that is he further strengthens the bond. Therefore, “pledge” is to make a commitment to Imam Mahdi, “bond” is to make a contract with Imam Mahdi, and “allegiance” is to pledge allegiance to him and submit.

How good would it be to make this concept more prominent? Definite affection is expressed by this phrase: meaning on my neck. “عنق” means neck. Someone may love something but they may not be proud of it. Thus the prayer illustrates that this should be an honorable love.

In Ahd prayer we say: “اَللّهُمَّ اجْعَلْنى مِنْ أَنْصارِهِ وَ أَعَوانِهِ وَ الذَّابِّينَ عَنْهُ وَ الْمُسْتَشْهَدِينَ بَيْنَ يَدَيْهِ” that is to say I want to be present in all the steps. Because sometimes a person loves someone to the extent that they are willing to lend them a substantial amount of money but would ask to be part of the trip themselves. Sometimes they would lend the money but would not want to associate with that person anymore. And sometimes they may allow the person to accompany them but would not give them any money.  Thus love, depending on the person and situation, becomes strong or weak.

This prayer says: God may make me his helpers and Shias. “Shia” means follower. “انصار” and victory is where help is needed. “ وَ الذَّابِّينَ عَنْهُ“  and his defenders. If someone offends you, we would not stand it. “وَ الذَّابِّينَ عَنْهُ“ we would not let anyone cause offence. We have religious zeal and we are proud of it.  Monopolisation in the way of truth is good. The first monopolist is God himself, because we should believe in His oneness. This is portrayed in the phrase: “ لا اله  ” I don’t believe in anyone “الا الله” except Allah.

“عَلَى طَاعَتِکَ وَ طَاعَةِ رَسُولِک” means dear Mahdi, make me one of your Shias, but according to what you said. Any type of perseverance is not the point here. The perseverance that is based on Allah is the key, according to the Qur’an: “those who say, “Our Lord is Allah”, and, further, stand straight and steadfast,” (41:30).  “As thou art commanded” (11:112) means as you are commanded. It means to persevere according to “God’s” order, not according to your stubbornness and desire. If someone had a desire and insisted on their desire, it is not perseverance, it is stubbornness.

A perseverance is valuable that is based on “As thou art commanded”, according to a command. A perseverance that is in the way of God, the Prophet of God, and the Imam of God. “عَلَى طَاعَتِکَ وَ طَاعَةِ رَسُولِک‏”.