Has any of the Sunni scholars confessed to the authenticity of the hadith of Qadir? 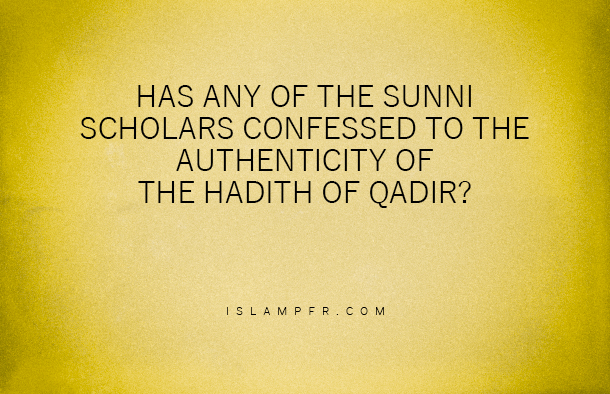 Has any of the Sunni scholars confessed to the authenticity of the hadith of Qadir (Imam Ali’s succession to the Prophet)?

He owns one of the six Sunni “Sahih” books, and right after the narration of this Hadith says:

It is an all right and authentic Hadith. [1]

Mr. Abu Ja’far Tahawi who is referred to as an Imam and his books are among the curriculum of all Islamic sects even Wahhabism, after narrating this Hadith, says:

This Hadith is a “Sahih” (Authentic) one and there is nothing wrong with the narration of Qadir Hadith. [2]

He, after narrating the Qadir Hadith, says:

All the Qadir consequences and Hadiths are fixed and proved as authentic. [3]

He mentions numerous ways and says: “This narration is correct.”

Our master Abu Abdullah al-Dhahabi has said: “This is a correct Hadith.” [4]

Our master Abu Abdullah al-Dhahabi has said: “This is a frequently narrated Hadith and I have no doubt that it has been narrated by Prophet Muhammad (PBUH) himself.” [5]

Many of its (Qadir Hadith) documents and references are “all right” and “Correct”. [6]

He is one of the greatest Sunni scholars and he is highly respected and praised a lot. He says:

If a narration which is narrated by 130 of the Companions (Sahabi) through numerous ways, and even some have mentioned 250 documents and references for it, can be uestioned and doubted then we won’t have any definite narration in Islam to refer to and depend on for further action.

“No one questions the authenticity of Qadir Hadith unless he is a dogmatic person and this dogmatism prevents him from realizing the truth or is willfully ignorant which means that although he is sure of its authenticity, he denies it.” [9]

“This person’s words are not worthy.”

“Yes, it has been proven to us that in Qadir Prophet Muhammad (PBUH), about Imam Ali (PBUH), had said: “Whoever I have been his master, from now on Ali is his master.”  [10]

He is referred to as Imam Ghazali. He says:

“Almost all Sunnis agree on the text of the Qadir hadith.” [11]

“This is a hadith with which everyone agrees on its authenticity unanimously.”

He says: “This is a frequently narrated narration and it is narrated by many and those who want to degrade it are uneducated and don’t know Elm al-Hadith (Hadith studies).” [12]

Manawi quotes Suyuti as saying the hadith is frequently narrated). [13]

This is a frequently narrated hadith and there is no doubt in that and 30 of the Companions (Sahabi) had testified to its authenticity when some were quarreling over Ali’s caliphate.

This hadith is either frequently narrated or famous. [14]

He is referred to as the contemporary “Bukhari”:

The Hadith of Qadir is translated correctly and two parts of it “Whomever I am his master, thus Ali is his, too” and the next part “May Our Lord love whomever, loves Ali and may take those who consider Ali as their enemy as His enemy.” are all right. The first part is frequently narrated and whomever follows and reasons the Hadith, will find it reasonable and will conclude the outcome (the second part).

Mr. Shoaib Arna’oot who is one the famous Sunni scholars, says:

There is a lot of evidence for the Qadir Hadith that reach to the level of frequency.

Late Allameh Amini and Honorable Ayatollah Milani in Nafhat al-Azhar have quoted 60 and 63 of the Sunni scholars who either have testified to the authenticity of Qadir Hadith or have confessed that it is a frequently narrated Hadith.

Mr. Ziauddin Muqbil is a person who, in Quranic and Sunnah sciences, is among pioneers and has reached the ultimate level of perfection and all his publications are highly accepted among other scholars.