Suffering , from Islam and Buddhism point of view- Part 1 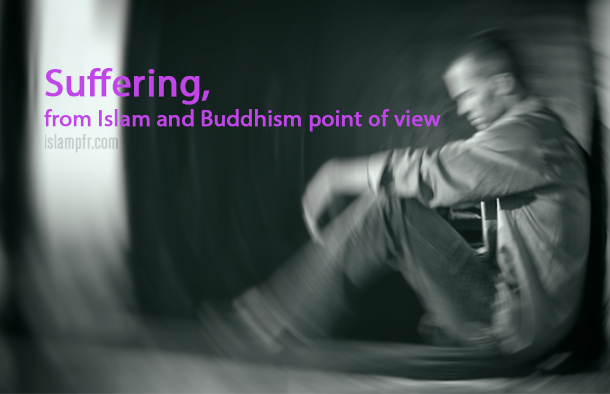 Suffering, from Islam and Buddhism point of view

One of the important teachings of Buddhism is the principle of suffering. According to this principle, Buddha regards suffering as the most important feature of human life and suggests some ways to be relieved of this problem. In the teachings of Islam and Shiite Imams (PBUT), although the existence of disasters and difficulties are accepted, but the suffering as a result of disasters is dependent on human’s viewpoint toward disasters and difficulties; although, suffering in Imams (PBUT) viewpoint is not equal to disaster. In this study, we will compare both views and shall study their agreements and disagreements.

Buddhism is one of the ancient religions of India. Buddhism is a meditative and rational school that emerged in sixth century BC in India and in later centuries it dominated large parts of Asia.

Today, it is estimated that between one-third and one-fifth of the world belong to one of the several sects of this school. During two centuries following Buddha’s death, his religion divided to eighteen sects and today, their followers are increasing, not only in the continent of Asia, but throughout Europe and America. (Wilson, 1374, p. 11/ Challaye, 1346 p. 145/ Cousins, 1384, multiple pages.)

One of the important teachings of Buddhism is the principle of suffering. According to this principle, Buddha regards suffering as the most important feature of human life and suggests some ways to be relieved of this problem; including: true cognition, true thought, true behavior and… also, the suffering principle is mentioned in Islamic teachings and Shiite Imams (PBUH) suggested some ways to be relieved of this issue; including: reliance on Allah, having holistic view, and acceptance of divine law.

The term suffering in the Quran is equivalent to the word «کَبَد». Raghib Isfahani defines «کَبَد» in these words: “:الکبد difficulty, the lord said: “لقدْ خلقْنا الانسانَ فی کبد”  “Verily We have created man into suffering.” this is an alert that Allah the Almighty created man in a way that difficulty would not be separated from him.” (Raghib Isfahani, [without date], vol. 1, p. 420) Also, Dehkhoda defines “suffering” as “trouble, difficulty and hardship”. (Dehkhoda, 1364, under the “suffering”)

Suffering is a psychological and internal state that as its result humans are suffered from mental illness and nervous disorders. This state is the result of being defeated against a higher will and failure to achieve the goals and desires. But if human’s will becomes similar to the will of Allah and fades in His will, he will reach to the Contentment and does not suffer anymore; because he knows that all events of the world take place with divine permission and whatever happens is attributable to Allah and every event is the outcome of his creative will and no suffering shall remain; as Imams (PBUT) have invited us to this way in which we can be relieved of suffering. But disaster is indispensable for human life in this world by which human is tested; hence it can be said: Although Imams (PBUT) faced many disasters in their life, they did not suffer.

According to the wise theologian Ayatollah Javadi Amoli : “Those people who have reached to the Contentment and the high peak of certainty and have acquired a satisfied soul and have been immunized against any temptation, vulnerability, mood swings and internal anxiety, will specially be addressed by Allah at the time of death:

The main question of the research is: What are the commonalities and differences of suffering principle from Buddha and Shiite Imams (PBUT) point of view?

Suffering, from Buddha and Islam point of view

Quran accepted hardship and difficulty in human life and says:

“Verily We have created man into suffering.” (Surah Al-Balad, 4)

The Oaths before this verse, along with various emphases given in verse, and also the word “فی”, all, shows that the life of this world is coupled with difficulties and hardships and this is the providence of Allah, because He said « خلقنا» “we have created”, and human cannot be relieved of these problems and difficulties as long as he is in this world.

Another point is that there is a relation between the mentioned verse and this verse:

Thinketh he, that none hath power over him? (Al-Balad, 5).

This relationship shows us a reasoning in which because human created with difficulties and hardships, he cannot reach to whatever he wants or can only reach to some parts of it.

Another fact that we can understand from the relationship between these two verses is that human is defeated against another superior will which shall overcome to the human’s will based on predetermination and design of the universe. This is the theme of the second verse:

(Thinketh he, that none hath power over him?)

So we can conclude that: from the structure of the life in this world human can understand that there is a superior will and it is Allah’s will (providence of Allah) and it is only his will that rules over the whole world (Tabatabai, 1417 AH, vol. 20, p 327); But the Creator, in addition to suffering in human life, refers to other cases; including impatience and haste of men to attain the truth; so that he will do wrong things and will unconsciously long for evil and harm to obtain his good.

The prayer that man should make for good, he maketh for evil; for man is given to hasty (deeds). (Al-Isra, 11)

Another characteristic of the human is that he tend to conflict and struggle and also does not accept the right words:

Another issue is that: the human being is rebellious. This state occurs when man feels no need to anyone:

Indeed, surely the human is very insolent, that he sees himself sufficed. (Al-Alaq, 6-7)

Truly man was created very impatient, Fretful when evil touches him; And niggardly when good reaches him. (Al-Maarij, 19-21)

One of the important teachings of Buddha is the presence of global suffering and ways to be relived of it. Buddha has presented his insights based on some points:

In this state, men will extinguish the fire of all desires in himself and shall be relieved of suffering and distress. The eyesight can see a picture, but mystic does not desire it. Whenever the mystic hears a voice with his hearing sense and smells a scent with his olfactory sense and touches something with his tactile sense and perceives something with his mind, he does not desire them and has no intention about them. The mystic will be relieved of these thirsts by having control over these senses and his thirst will be quenched. (2)

Commonalities and distinctions of two views

In both theories, the principle of suffering is accepted, but the viewpoint of Islam and Buddha is different. These differences can be summarized in several contexts:

On the contrary, Islam regards suffering as only one of the characteristics of men which is not the most important one in comparison with other characteristics; Also, according to Islam, the Creator created the world in such a way that there is no way to be relieved of disasters and difficulties, and ultimately disaster is different from suffering. There is no escape route to get rid of disasters of the world and as Imam Ali (PBUH) said:

But man will never suffer from anything if he reaches to the level of Contentment and be aware that everything which happens in this world is according to design of Allah and every disaster that occurs in the world including death, aging, disease, poverty, flood and earthquake are attributable to him. Therefore, not only Imams (PBUT) did not suffer from these events, but also enjoy them and regard them as beauty because they believed that they are all from Allah.

Suffering , from Islam and Buddhism point of view- Part 2