Home Articles The story of Jesus (PBUH) in the Quran
Articles 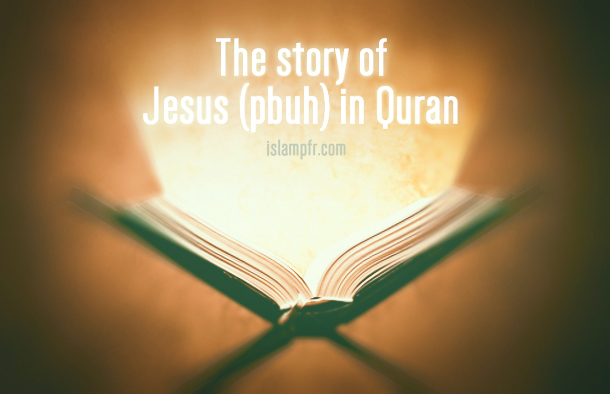 Although Prophet Muhammad (PBUH) was the last prophet and the accomplisher of the divine religion, holding a higher status among the holy prophets, Islam holds all the holy prophets respectable and Venerable; as they were chosen by God; therefore, Muslims should cherish and respect all the messengers of God the Almighty.

The holy book of Muslims, the Holy Quran, tells the story of a number of the holy prophets, for example, the story of Jesus (PBUH) which we shall have a brief review of below:

How he was born

After presenting the events related to the birth of Mary (PBUH) and her serving in the temple, God the Almighty tells the story of how she became a Mother and says:

“And mention, [O Muhammad], in the Book [the story of] Mary, when she withdrew from her family to a place toward the east.” (Surah Maryam (Mary):16)

She tried to find an isolated, quiet place to pray, so that nothing distracted her from her beloved (God), so she chose the eastern side of Jerusalem.

“And she took, in seclusion from them, a screen. Then We sent to her Our Angel, and he represented himself to her as a well-proportioned man.” (Mary: 17)

That was hard time for Mary. She had led a chaste life and grown up in a virtuous family and was known as a symbol of Chastity and piety; she was scared and worried when the beautiful stranger (Angel Gabriel) appeared in her sanctum.

Mary said that, with fear and worry, to find the reaction of the unknown man. After a moment, she heard his answer:

She said, “How can I have a boy while no man has touched me and I have not been unchaste? (Mary: 20)

This is what your Lord wants, and doing it is facile for me.

These verses tacitly point to the facts and state: Oh Mary! You know about my power, as you saw the fruits of Paradise beside your Worship altar in a season in which no one could have access to them, you heard the Angels who testified to your purity, you know that your Forefather, Adam, was Created from clay, so you should not be surprised about this will of God either.

So she conceived him, and she withdrew with him to a remote place. (Mary: 22)

And the pains of childbirth drove her to the trunk of a palm tree. She said, “Oh, I wish I had died before this and was in oblivion, forgotten. (Mary: 23)

But he called her from below her, “Do not grieve; your Lord has provided beneath you a stream. (Mary: 24)

And look above your head, and see how a dried up Stem turns into a fertile palm tree, with branches adorned by its fruit.

“And shake toward you the trunk of the palm tree; it will drop upon you ripe, fresh dates.” (Mary: 25)

“So eat and drink and be contented. And if you see from among humanity anyone, say, ‘Indeed, I have vowed to the Most Merciful abstention, so I will not speak today to [any] man.” (Mary: 26)

When they saw her with the newborn, they were completely surprised. Those who had known her as a symbol of piety and dignity became worried about her and began to suspect and mistrust her. Some of them hastily made judgments and reproved her and said:

“O sister of Aaron, your father was not a man of evil, nor was your mother unchaste.” (Mary: 28)

They called her “Sister of Aaron” because Aaron was a pure and righteous man and all of the Israelites knew him. When people wanted to talk about a person who was immaculate, they said:” he/she is brother/sister of Aaron”. At this moment Mary kept silent at God’s command and pointed to her son.

Shortly, the newborn started to talk:

[Jesus] said, “Indeed, I am the servant of Allah. He has given me the Scripture and made me a prophet (Mary: 30)

“And He has made me blessed wherever I am and has enjoined upon me prayer and zakah (almsgiving) as long as I remain alive.” (Mary: 31)

The miracles of Jesus (PBUH)

“And We gave Jesus, the Son of Mary, clear proofs, and We supported him with the Holy Spirit.” (Surah BAQARA (THE COW):253)

Based on history, “clear proofs” refers to miracles like: Healing incurable sicknesses, Revival of the Dead and supreme religious knowledge.

In this verse reference is made to one of Jesus’s (PBUH) miracles:

“He will speak to the people in the cradle and in maturity and will be of the righteous.” (Surah AL-E-IMRAN (THE FAMILY OF ‘IMRAN): 46)

“And [make him] a messenger to the Children of Israel, [who will say], ‘Indeed I have come to you with a sign from your Lord in that I design for you from clay [that which is] like the form of a bird, then I breathe into it and it becomes a bird by permission of Allah . And I cure the blind and the leper, and I give life to the dead – by permission of Allah. And I inform you of what you eat and what you store in your houses. Indeed in that is a sign for you, if you are believers.” (THE FAMILY OF ‘IMRAN: 49)

In the 110th verse of the Al-Ma’idah Surah, God reminds us of all the miracles of Jesus (PBUH) which have been named in THE FAMILY OF ‘IMRAN: 49, saying that all of these miracles were done by the permission of God, and his revival of the dead and curing of the blind and the leper had been done by his permission.

Who are the Apostles?

The Apostles of Jesus (PBUH) have been mentioned 5 times in the Holy Quran, 2 of which are in the As-Saf Surah. This name refers to twelve of the special companions of Jesus (PBUH), whose names are available in the Current Gospels (Matthew and Luke – Chapter 6); this name comes from “Hur” in Arabic, which means washing and bleaching, and since they had pure hearts and graceful souls and tried to clean the hearts and minds of themselves and others, they’ve been called so (in Arabic).

Some Riwayahs tell us that Jesus (PBUH) sent each one of them to a different part of the world as his envoy, they were sincere, dedicated and militant persons and loved Jesus (PBUH) from the bottom of their hearts.