Home Articles Is Solomon a legendary king or a historic one as a Prophet? Part 4
Articles

Is Solomon a legendary king or a historic one as a Prophet? Part 4 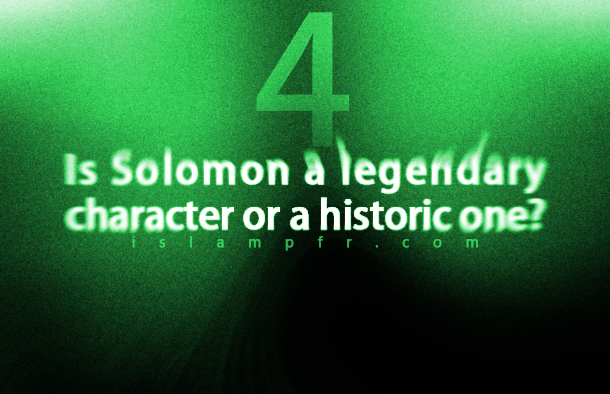 Solomon and magicians
“They followed what the evil ones gave out (falsely) against the power of Solomon: the blasphemers Were, not Solomon, but the evil ones, teaching men Magic, and such things as came down at Babylon to the angels Harut and Marut. But neither of these taught anyone (Such things) without saying: “We are only for trial; so do not blaspheme.” They learned from them the means to sow discord between man and wife. But they could not thus harm anyone except by Allah’s permission. And they learned what harmed them, not what profited them. And they knew that the buyers of (magic) would have no share in the happiness of the Hereafter. And vile was the price for which they did sell their souls, if they but knew!” (The Quran- Chapter 2- Verse 102)
This verse is one of the difficult verses of The Quran. Interpreters mention different definitions and aspects for it.  This verse mentions Solomon and Harut and Marut. Some interpreters believe that the Solomon’s story was secret for the people in the past. (21) The late Allameh Tabatabayi mentioned different probabilities for this verse and he said there are 1260000 probabilities for this verse. (22)
This verse mentions one of the Jews traits that was magic popularity among them. They even attributed magic to Solomon and believed he ruled the country by magic art. The aboveverse defends Solomon and says that Jews viewpoint about Solomon and magic art was not right. To whom does this part of the verse refer to: “They followed what the evil ones gave out (falsely) against the power of Solomon”? Tabarasi has 3 ideas:

The word “magic” and its derivatives are brought in The Quran for more than 50 times and Raghib Isfahani said 3 definitions for it:

According to hadith and interpretations, at the time of Solomon, there were some groups of people who tried to promote and spread magic art. Solomon collected magicians’ manuscripts and prevented them from working. But they spread magic after Solomon’s death again and said Solomon was not a prophet and he could manage the country with the help of magic. Following them the Israelites became interested in magic and left Torah. (25) More stories about Harut and Marut are quoted by Israelites who quoted them from ka’ab Al-Ahbar. (26)
Ibn-Hisham quoted from Ibn-isac that: When The Quran introduced Solomon as a prophet of God, some Jewish scholars said: isn’t it a wonder that Muhammad (PBUH) knows Solomon as a prophet, while he was a magician. If someone accepts Jews’ accusation against Solomon that he was a magician, he/she should believe that he was an atheist. . The Quran responds to them: Solomon didn’t become pagan but the people who taught magic to other people and spread it became pagan. (27)
From the past, some people claim that they had relationships with evils, jinns and souls of dead people. Some people believe these claims. On the other hand, some people believe that these kinds of relationships are impossible and what is said in this regard is a lie or it is derived from imagination or illusion of people who claim to have it.
Allame Hilli (726-648) in Qawā’id al-Aḥkām defines magic and says magic has no reality and it is some sort of an imagination. (28)
According to these peoples’ beliefs, magic has only a mental effect and its impression and magician’s will cannot prove magic’s reality. Magic effect is mostly on mind of the bewitched person and magician affects the viewer’s imagination, so his/ her imagination affects himself/ herself and creates hope, energy, fear or sadness. The Quran speaks about it in several chapters:

They said: “O Moses! Whether wilt thou that thou throw (first) or that we be the first to throw?” (Chapter 20- Verse 65)He said, “Nay, throw ye first!” Then behold their ropes and their rods-so it seemed to him on account of their magic – began to be in lively motion! (Chapter 20, Verse 65-66)
We have some hadiths about magic from our imams. For example, imam Ali (PBUH) said “everyone who knows magic becomes atheist and his relationship with God is terminated” (29). Islamic scholars know magic learning and its usage as a taboo.  There is also a hadith from Imam Sadiq (PBUH) that reads: Cane of Moses and ring of Solomon are in Imam Mahdi’s hand (PBUH).
Conclusion

Solomon has special respect in The Quran and God knows him as a righteous person and prophet and pure of every sin. The Bible says details about Solomon but The Quran has another way. The genealogy of Solomon in the Bible has made commentators justify different things. On one hand, they know him as son of God and the constructor of God’s house. On the other hand, they know Bathsheba, Uriah’s wife, as his mother.
The Old Testament shows Solomon’s government as a kingdom. In the Old Testament, the glory of kingdom, has is depicted in different aspects of Solomon’s life such as competition to gain reign and abandoning the principles. While The Quran knows Solomon as a prophet of God.
One of the properties of the bible is its quotation about competitions for accessing to the government and government disintegration after Solomon’s government and the reasons of disintegration. The bible attributes written works to Solomon. The Quran introduces Solomon as a wise man but does not attribute any written books to him.

25.akarem Shirazi, Commentary on the The Quran, volue1, page261