Home Articles Is Solomon a legendary king or a historic one as a Prophet? Part 2
Articles

Is Solomon a legendary king or a historic one as a Prophet? Part 2 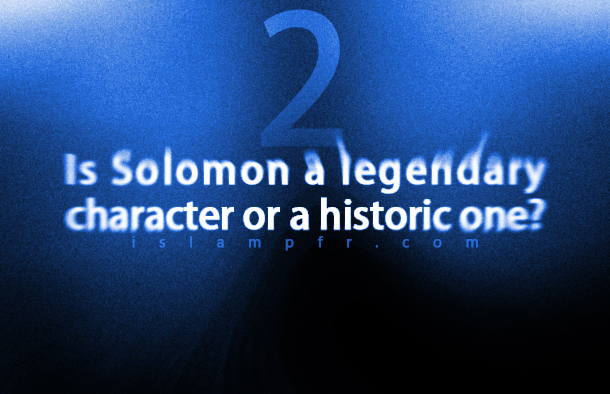 In Jewish interpretations the innocence of the prophets is more of a moral necessity rather than verbal necessity. Most of Jewish scholars in their interpretations writings have defended the sins of David and have tried to justify them. Regarding Prophet David (PBUH) they have referred to this statement: “David was rational in all his behaviors and God was with him all the time”. (30)
Jewish scholars have said: In Second Book of Samuel God says: “Why did you ignore the word of God and did a bad thing in his presence” to reproach David. But in its Hebrew manuscripts this statement is mentioned in a way that means: “You were about to do this bad thing”. However in other parts of Old Testament this statement is more direct about the people. From Jewish interpreter’s point of view, it was Uriah’s right to be killed just because he disobeyed Prophet David (31) and David was criticized because he killed Uriah without trial. On the other hand, the people who were sent to the war by David’s family used to divorce their wives before they go to war. This topic comes from a Hebrew word “Aruba”.
In Judaism, “Aruba” is dowry or a gift which is given to a divorced woman. These divorces were gotten secretly so nobody could take advantage of it. These women could marry if their husband was disappeared. Considering this divorce, David has done a query regarding Bathsheba. (32) As priests say if somebody wants to fornicate, he won’t ask about the woman’s family. The interpreter of the second book of Samuel (9:11) says the reason that Uriah did not go back home was that he did not want to divorce his wife for the second time.
As mentioned in Talmud and other Jewish interpretations, the murder of Uriah is justifiable, because Uriah disobeyed David and did not go back home telling that Joab is the commander not David and he takes orders from Jaob. So, he should have been executed for his disobedience. It seems that the only mistake that David made, was that he prepared the condition for Uriah to be murdered in a war instead of having a trial for his execution. The best reason for David’s innocence is because the extension of his kingdom was the result of his marriage to Bathsheba.
Irnabel is one of Sephardi Jews (33). Irnabel says David committed five major sins:

The prophecy of Solomon (PBUH)

The Quran identifies appointment of the prophets to prophecy as a continuous event in history. The endorsement to their claim in prophecy is that God has sent them inspiration. Prophet Solomon (PBUH) also enjoyed this blessing. If someone denies that inspirations were sent to Prophet Muhammad (PBUH), in fact he has denied sending inspirations to other prophets. The Quran has raised Prophet Solomon and considers him as a righteous servant of God and also one of the Prophets to whom knowledge and wisdom has been given.

The Quran has also addressed the blessing of sending inspirations to Prophet Muhammad and the prophets before him and also ranked Prophet Solomon among other prophets of God and says: “We have sent thee inspiration, as We sent it to Noah and the Messengers after him: we sent inspiration to Abraham, Ismael, Isaac, Jacob and the Tribes, to Jesus, Job, Jonah, Aaron, and Solomon, and to David We gave the Psalms.” (chapter 4- verse 163)
Moreover, The Quran recalls prophets like Ibrahim, Isaac, Jacob, Noah, David, Job, Josef, Moses, Aaron, Zechariah, Yahiya, Jesus, Elijah, Ismael, Elisha, Lot as  guided, righteous and benefactor people and ranks Prophet Solomon  among them and says: “We gave him Isaac and Jacob: all (three) guided: and before him, We guided Noah, and among his progeny, David, Solomon, Job, Joseph, Moses, and Aaron: thus do We reward those who do good” (chapter 6 – verses 84-86)
Using this verse of The Quran, Allameh Tabatabayi has realized that Solomon is from Noah’s progeny and generation and has written: Apparently, the pronoun in the word “progeny” refers to Noah because in one hand, the closest pronoun in the sentence refers to Noah and on the other hand, in the verse, some other prophets are named who are not from Abraham’s generation. People of the Book, know Prophet Solomon as a famous king of Israelites. The Bible does not speak about the prophecy of Solomon. The prophecy of Solomon has been mentioned in the book of “Proverbs of Solomon”.

The kingdom of Prophet Solomon

“And before Solomon were marshalled his hosts, of Jins and men and birds, and they were all kept in order and ranks.” (chapter 27- verse 17) The Quran is speaking about birds and animals which Solomon had Subjected them. The issue of subjection and influence on the animals is also possible for the people other than prophets. Some of the interpreters say the 17th verse of Surah Naml in The Quran refers to the point that all human beings, Jinns, and birds were in the army of Prophet Solomon and he was the owner of all creatures on earth and in his era, the birds were wise and duty-bound. Though it might not be the case in our era. Because if birds had not wisdom, it was not right to subject a duty or a task to them. This statement is clear and there is no need to bring further reasoning. (35)
Martyr Motahari has written: Despite the popular assumption, the territory of Prophet Solomon was not large and it included only the Palestine region. What The Quran mentions is the wonderful power of Solomon, not the scope of his country. . Even he did not have knowledge about the other regions of the earth. For instance he did not know what is happening in Yemen. (36)
There is no doubt that the wisdom and kingdom of Solomon excelled all kings that were rulling in the Jerusalem region. The kingdom of Israelites in the era of David was empowered, and after David, Solomon used what his father had achieved. The advantage of Solomon’s government was peace and success. The explanation of this era has been summarized in the books of 1Kings and 2Chronicles.  In the Hebrew Old Testament (Tanakh), the first and second book of the Kings were one book. The translators divided the translation of Septuagint into two parts. These two books cover the 400 years (600 – 1000 BC) and the kingdom of Solomon, disintegration of the kingdom, the history of two parallel powers and the history of Judaism in captivity. (37)
The author mentions the existing historical books in his period such as Solomon Events, Chronicles of Israeli Kings and the Chronicles of Jewish Kings. He also refers to the annual reports of the country. According to a Jewish narration, the author of the book Kings is Jeremiah. But, the true author is not clear.
According to Old Testament, Solomon didn’t inherit the kingdom of his father, David, without opposition. Solomon, the son of Bathsheba (The former wife of Uriah), was selected by David to be his successor and God confirmed it. (38) Adonijah, was the 4th son of David and wanted to be his successor. (39) While David was dying and before Solomon be elected as the king, Adonijah plotted to seize the power from Solomon but his conspiracy was terminated by Nathan the prophet.
But Adonijah was insistent on taking the power. And Solomon removed all the people who conspired against him. Adonijah, son of David, was thinking about seizing the power from father ambitiously. Adonijah was older than Solomon. Adonijah was supported by Joab and by inviting him to Jerusalem he wanted to become the king. But the priest Sadoog appointed Solomon as the king and after that, his kingdom was empowered day by day.
“And if Solomon is persistent in doing my rules, I will empower his kingdom forever”. (40) Solomon ruled for 40 years from 931 to 971 B.C. (41) It seems, 40 is just a rounded number to indicate a generation. The number 40 has been used many times in Bible. (42)

33. Jews in the south of Europe and North Africa are named Sephardi

Is Solomon a legendary king or a historic one as a Prophet? Part 1