Home Articles Satanists; from distortion of prayer to propagation of Metal
Articles 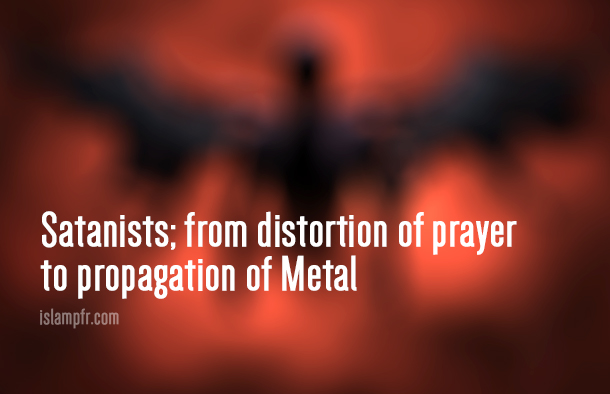 Satan’s followers propagate their ideas through this claim that God is incapable to comply with requests. They say: Not only God does not solve your problems, but also He creates new problems for you. Thus the antithesis of God, Satan, can be your refuge.

Nowadays, Satanism over a momentary motion has emerged with the spiritual concepts In spite of the current thought, this ideology has some attractive points in which it is so difficult to be understood by   those who do not have a clear notion of its teachings.

The distortion of prayer’s concept

Satan’s followers propagate their ideas through this claim that God is incapable to comply with requests. They claim that: Every day, you pray to God for solving the problems of your life and ask him to help you, not only He does not solve your problems, but also He creates new problems for you. Thus the antithesis of God, Satan, can be your refuge.

In the above argument, what is needed to be reviewed and reformed is the “concept of prayer”. It is clear that a lot of psychological and mental problems of modern human are rooted in the foundations of western civilization. Waiting for God, doing nothing and only confining to some utterances as the name of prayer for solving problems is a childish practice which does not have any relationship with the transcendental concept of prayer.

God never has promised to instantly fulfill all of humans’ requests, of any kind and form. Such a conception is compatible with Humanist’s point of view not with religious and inspirational viewpoint.

In Humanist’s point of view, everything must serve human’s joy and comfort. Even God should take a part in this way and should not neglect to perform human’s order which is called prayer. If He delays performing human’s requests, so He is not qualified to enter human’s life.

In religious and inspirational viewpoint, mankind, who has received divine mission, should use his forces for moral excellence and social development through his will. And God, of course, mobilizes His facilities for the realization of such a purpose. Since, such a human who has a divine purpose and also has used his skills and facilities, should ask God to help him passing the way quickly. Thus the meaning of the prayer is revealed in this process.

So far Metal music and its subcategories has served evil circulation to a great degree.  Due to its high capacity, high consistency and congruency with evil’s customs and traditions, metal style has shown a successful face in transmitting evil’s concepts and in demonstrating evil’s pleasant ideology. Seemingly, although   some of musical groups have not been known as devil worshipper but they have an important role in creating social contexts for the development of Satanism.

“Sex Pistols” group in which had advocators more than any other groups in its time lost one of its musicians in a 15-day tour in America. Sid Vicious suddenly killed his wife in the backstage of the concert and committed suicide in the next night.

The advocators of this group called this event Holy disaster. Such a decadence and deviance caused them to more pleasantly propagate   the ideology of Satanism, the accuracy of their claims, based on favorable acts of insanity and showing a black picture of current situation.

In terms of content, vulgarity and violence is the integral part of evil songs. It signifies   the contents which are mostly about sexual recklessness, instilling fear into others’ minds and hearts, and opposing the divine and revelatory teachings.

Some of famous musical groups have irrefrangible relationship with Satanism, in a way in which some of the leaders of these groups were in prison for a while due to some reasons, like sexual insanity, raping, beating, indulging in using wines.

Marilyn Manson, whose real name is Brain Hugh Warner, is the musician and the leader of Marilyn Manson group. So far, in the form of evil, violent and anti-religious poetry, he has had an effective role in the propagation of Satanism. It is said that when he was performing concert he tore Gospel and threw it into the crowd as he was shouting with his dry and rough voice: “It is your God”. Belief in disbelief and emptiness, invitation to nihilism and anti-Christ’s concepts are the messages of Mason’s clips.

The songs of Manowar group, consist of violent themes which the propagation of these albums have been forbidden in many countries. The content of these group’s poetry is moral nihilism, breaking the norms, illegality, attacking traditions and blasphemy. The souvenir of this prohibited group, which frankly claims Satanism, has had mental destructive effects and several social damages for youths.

The ideas of many of Christian Zionists , whose their common mode with devil worshippers is the belief to the wonderful power and forces of Satan, are seen obviously in the poems of Metal leaders. And also the belief to the incomparable power of Satan at the apocalypse and the weakness of God in managing the universe are apparently declared.

Somethings have been said about the apocalypse and Armageddon in the Book of Ezekiel prophet: “Heavy rainstorm and hailstorm beget intensive earthquake in which the mountains are overthrown and the earth destroyed.”

The location of this battle’s outbreak is in the “Megiddo” desert, in the north of Israel and the western shore of Jordan River. According to the foresight of Christian Zionists, this battle will happen between good forces of Jews and evil forces of Muslims and will spread to allover of the world.

The famous poet of Metal, Eric Adams, has been said in the Kings of Metal’s album:

The earth will be mixed with fire.

And then the hail, fire and blood fall on Satan’s throne.

His hair is white, like a cloth which covers the fact; and his eyes shine like the lightning.

In Black Sabbath songs, the ideas of Anton Lavey about the dominance of Satan on world and God’s passivity have been explicitly reflected. Denying the resurrection and mocking the afterlife, which are emphasized in Lavey’s writings, have been reflected too:

… What God is it? He is standing and listening to the moans of his people without doing anything?

Which hand will be raised for protestation, while He is watching the death of people!

How is this life? What will be happened to us?

Oh, oh, this is the result of our mistakes.

…. The mortal world will vanish us by and by.

I think, now, there is no God who can lead us to salvation.

Tomorrow will not exist.

O, Jesus! It seems that our questions would never be listened.

… Do the heaven and hell   really exist?

Or in the Collection of “Sepultura” has been said:

… I’m standing here and whole of my belief is missed.

A second life may be a lie!

But my modern life is not worth paining…

The above expressions are exactly the content of some parts of Lavey’s Satanic Bible which have been expressed in poem. While the songs’ propagators and translators of this group are trying to introduce the content of these poems as “anti-battle”, then they can show it compatible with the religious values and native culture.

“Dave Mustaine” who left the scene when he was performing the concert, protesting Metallica’s cruel actions, and formed “Megadeth” group, in an interview, had said with his intense hatred of Metallica: … I was diving in dirt when James Hetfield cutting the head of an alive bat with his teeth and sucking its blood. I wanted to vomit on scene.