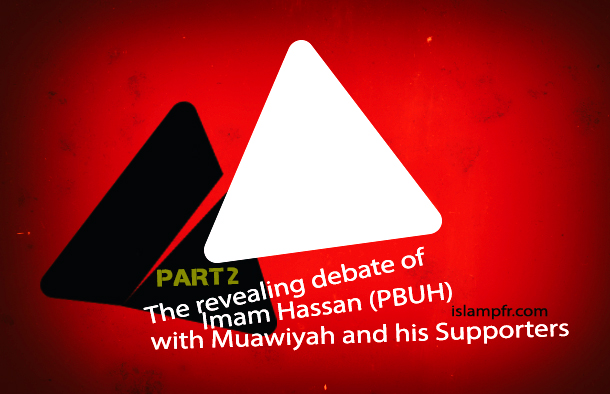 “Muawiyah! I’m talking to you, you Ungodly! In this debate no one reviled me but you, these people didn’t revile me, you did. All these Profanities are from you. You are the one who oppresses, feuds and grudges us. You did this to Prophet Muhammad (PBUH) and now again continue doing it [with his descendants]. You Ungodly; I swear if this debate took place in The Mosque of the Prophet (PBUH) and the Emigrants and the Ansaar were around us, they could not give speeches like this and could not greet me the way they did.”

“O you who have collaborated against me! Do not deny the truth that you are aware of; and if I say something untrue, do not confirm it.”

“Muawiyah! I shall First of all remind you of some things, although I cannot say fully how villainous you are!”

“I swear to God! Did you know the man whom you reviled has prayed towards 2 Qiblas, while you considered him as perverse and worshiped the Laat and Uzza idols? Imam Ali (PBUH) pledged allegiance 2 times, Pledge of the Tree (Pledge of Ridwan) and Pledge of the victory (Fath). And you Muawiyah! You disbelieved on the first pledge and broke the second one.”

“I swear you are not truly a Muslim yet! You are saying something that you do not believe with your heart.

Did you know when the Prophet (PBUH) went to the Battle of Tabuk, he chose Imam Ali (PBUH) as his surrogate without any abominations? When the Tartuffes blamed Imam Ali for this position and He told the Prophet: do not leave me in Medina, I’ve never left you alone in any battles. The Prophet answered: you are my Successor and caliph in my family just like Aaron was with Moses, then he took Imam Ali’s hand and said: Listen to me! One who loves me, loves God and One who loves Ali loves me. One who obeys me, obeys God and one who obeys Ali, obeys me.”

Imam Hassan (PBUH) continued: “By God! Did any of you hear about the Holy Prophet’s (PBUH) sermon in Hajj al Wida?! That he said “O People, I left the Holy Quran for you so that you do not stray in the future, so take your oath of allegiance and observer every Halal and Haram. Believe in the Mutashabeh verses and confess that you believe in the Quran that God has sent you. Love my family (Ahl al Bayt)! Love those who love them and help them against their enemies. The two (the Holy Quran and the Ahl al Bayt) shall be among you and never separate from each other until they come to me by the Pool (of Paradise). Then while he was on the pulpit (minbar) he called Imam Ali and raised his hand and said: “O’ God, love those who love him, and be hostile to those who are hostile to him, O My Lord! Do not bless anyone who is hostile to him (neither in the world nor the Hereafter) and put them in the lowest place of Gehenna (hell).”

“By God! Did you know that the Holy Prophet (PBUH) told Ali (PBUH): “You are the one who disperses the wicked from my pool’s side in the day of judgment, just as any one of you disperse wandering camels from among your own herd.”

“By God! Did you know that when Imam Ali went to the Holy Prophet during the illness that led to his demise, the Prophet cried. Ali asked: “Why do you cry, O Messenger of God?” He replied: “I am crying as I am aware of the enmity and vengeance that my people have towards you in their hearts, which they will not reveal until I am gone.”

“By God! I ask you, did you know that when the Holy Prophet (PBUH) was passing away, all his family gathered around him and he said: “My Lord! These are my family (Ahl al Bayt and Etrat). O Lord! Love those who love them and help them against their enemies.” Then he said: “My family is like Noah’s Ark for you, everyone who boarded will survive and the ones who fall behind will drown.”

“By God; did you know the companions of The Prophet, when he was alive, congratulated Imam Ali! Did you know Imam Ali was the first person among the companions of the Holy Prophet who prohibited all the blessings for himself; following which this verse was sent by the Lord: “O ye who believe! make not unlawful the good things which Allah hath made lawful for you, but commit no excess: for Allah loveth not those given to excess. Eat of the things which Allah hath provided for you, lawful and good; but fear Allah, in Whom ye believe.”[5:87-88]

“Imam Ali (PBUH) had the erudition of Manaya, judgment Knowledge, discernment of truth vs. falsehood, science, and knowledge of Quran. Ali was one of the 10 persons whom God had informed that they are believers. But you were among a small group who had been anathematized by the Prophet. I bear witness that all of you had been anathematized by God through the Prophet’s tongue.”

“By God! Do you know that the Holy Prophet (PBUH) sent after you (Muawiah) to write a letter to Khalid ibn Walid when he had overtaken the Bani Khazimah tribe. The messenger of the Holy Prophet returned three times to inform him that Muawiah was busy eating. The Holy Prophet cursed you and asked God the Almighty: “Oh lord. Afflict Muawiah with never ending hunger …”

“By God! Did you know that the Holy Prophet (PBUH) anathematized Abu Sufyan seven times: first one was when the Prophet left Mecca and entered Medina and Abu Sufyan came from Sham! He abused the Prophet and reviled him and threatened him with death and tried to attack the Prophet, but God saved   him.”

“The second one was when Abu Sufyan left the convoy and gouged it from the Prophet.

And the third one was in the battle of Ohod, when the Prophet said “God is with us and you don’t have any helper”. Abu Sufyan answered: “We have the Uzza which you don’t have.” So that God and the angels and the Prophet and all the believers anathematized him.”

“The forth one was in the battle of Hunayn, when Abu Sufyan brought the Quraysh and Hawazin and Uyainah and the Ghtfan’s and The Jews. Then God smote them. God named them in the Ahzab and Fath Surahs.”

“Muawiyah! You were in Mecca and were a polytheist like your father. But Imam Ali was a follower of the Holy Prophet (PBUH) at that time.”

“The fifth time in this verse where God the Almighty has said: “and the sacrificial animals, detained from reaching their place of sacrifice”. (Fath: 25). O Muawiyah, On that day you, your father and the Polytheists of Quraysh blocked the way of the Holy Prophet, so God cursed your father in such a way that the curse will be with him until the Day of Judgment.“

“The sixth time it was in the War of Ahzab, when Abu Sufyan brought the group of Quraysh and Ayeneh bin Hesn ibn badr brought the Ghatfan Group, and the Holy Prophet cursed their guide, their followers and the one who led it forward until the Day of Judgment. The Holy Prophet was ask about the believers who were among the followers, he replied that the curse does not affect the believers. But there is not even one among their guides who is a believer, one who has accepted the call and one who is saved.”

“By God! Do you know that when people took oath with Othman, Abu Sufyan went to him in the Prophet’s Mosque and said: “O son of my brother! Is there anyone who is against us?” He replied: “None”. Abu Sufyan said: “So pass the Caliphate among the youth of Bani Ummayah one after the other, I swear to the one who the life of Abu Sufyan in His hands that there is no Heaven and no Hell.””

“By God! Do you know that when people took oath with Othman, Abu Sufyan held Hussain’s hands and said to him: “O brother, come with me to the Baghi.” When they reached the middle of the Baghi, Abu Sufyan pulled Hussain with him and shouted as loud as he could: “O you who have passed away and are gone! The Caliphate for which you fought is now ours and your bones have rotted away.” Hussain told him: “May God disgrace you in old age and turn your face into an ugly one!” Then he took his hands out of Abu Sufyan’s and left him alone ….

“These are what you should be ashamed of. Can you bring such examples from us?! Muawiyah, among things that will bring you damnation is that when your father Abu Sufyan decided to become Muslim, you sent the poem which is famous among the Quraysh to stop him from accepting Islam. Among things that you should be ashamed of is the fact that Omar ibn Khattab appointed you as governor of Shaam, but you betrayed him. When Omar appointed you as governor, you were awaiting his death. Worse than all these is the fact that you fought Ali (PBUH) while you were aware of his brilliant past and his wisdom and knowledge. Ali was more deserving in the eyes of God and people for the Caliphate than you. It was you who at midnight betrayed the people and caused the blood of many persons to be shed with your deceit and false claims. Your action was same as one who does not believe in the Day of Judgment and is not worried about punishment in the hereafter.”

“O Muawiyah! These were all the things that you should be ashamed of. I will not recall the rest of your shameful background and evil traits to shorten the talk.”