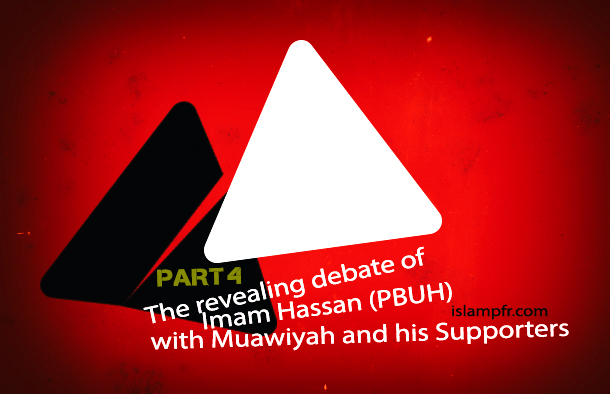 “And about you Muquaayrah ibn Shouba! You are truly the enemy of God, since you rebut his Quran and his Prophet. You are adulterous and you should be punished for it, because fair and righteous witnesses affirmed your adultery, but stoning you was delayed. Your punishment in this world was forgotten due to falsehood covering the truth, while God had prepared a painful punishment and disgrace in the world; however, the disgrace of Hereafter is much worse.”

“You were the one who beat Fatimah Zahra (PBUH) and shed her blood, such that she aborted her son. You did that to profane the Prophet and to disobey and desecrate him. Although he had said to Zahra (PBUH): “You are the most dignified woman in Eden.” I swear to God your destination is the fire of hell and you will be punished for what you have said.”

“For which of these issues you reviled Imam Ali? For shortcomings in his ancestry? For being far away from the Prophet? For doing something wrong towards Islam? Did he adjudicate with oppression? For desiring this world? If you say so, you are a big liar and people will reject your lies.”

“Do you think Imam Ali killed Othman innocently? Swear to God Ali was much more virtuous and purer than the one who is blaming him. If it were like you said and Ali killed Othman innocently, it is none of your business, since when Othman was alive you did not succor him and after his death you did feel concerned. You always lived in Taif. You always longed for adulterous women and adhered to all the affairs which belonged to the Time of Ignorance and were a destroyer of Islam, till what shouldn’t happen, happened.”

“And on your objection to Bani Hashim and Umayyad; you want to please Muawiyah with these words. But the answer for what you said about the Emirate and what your friends said about the Royal authorities that you have gained, is: Pharaoh was the king for four hundred years and Moses and Aaron were the Prophets who bided him to the right way and they were hurt by the Pharaoh so much. God gives the position of Caliph to both Righteous people and criminals. God says:

{ “I know not but that it may be a trial for you, and a grant of (worldly) livelihood (to you) for a time.”}[21:111] and also says: {“When We decide to destroy a population, We (first) send a definite order to those among them who are given the good things of this life and yet transgress; so that the word is proved true against them: then (it is) We destroy them utterly.”}[17:16]

Imam exit from the debate

After Imam Hassan (PBUH) Confuted all the attendance, he rose up and shook his clothes while he recited this verse: “{Women impure are for men impure, and men impure for women impure} By God, Muawiyah this part of the verse refers to you and your supporters and their followers {and women of purity are for men of purity, and men of purity are for women of purity: these are not affected by what people say: for them there is forgiveness, and a provision honorable. }[24:26] and this part of the verse refers to Imam Ali (PBUH) and his companions and followers.”

Then while Imam Hassan (PBUH) was leaving, he told Muawiyah: “Be ready for all the torments such as Scandal in the world and a painful chastisement in the hereafter which God prepares for you and your supporters due to your wicked deeds and crimes.”

After that, Muawiyah said to his supporters: “You were punished for your crimes too!”

Walid ibn Aqhabah replied: “By God we were not punished as much as you, Imam Hassan only insulted you”.

Muawiyah said: “I said before that you cannot take revenge of him. It was better if you had listened to me or took revenge of him who decried you! I swear to God that when he rose up, the room turned dark to me. I wanted to hurt him. Neither today, nor in the future, is there any use in you.”

Narrator said: When Marwan ibn Hakam heard of the debates and conversations and knew about Muawiyah and his followers’ disgrace by Imam Hassan, he immediately went to them. When he got there, they were in Muawiyah’s place. Marwan asked: “Which offenses did Imam Hassan do?” They answered: “Everything you heard is true.” Marwan said: “Then why didn’t you call me! I would insult him and his father and his family, in a way that all slaves and handmaidens would talk about it.” Muawiyah said: “They won’t be surprised, they know about Marwan’s background in profanation and obscenities.” Marwan told Muawiyah: “Summon Hassan.” When he summoned Imam Hassan, Imam asked his envoy: “What does this peccable man want? I swear if he wants to answer back and makes insults, I will tell him all the shames and disgrace that he has.”

Imam’s return to the debate

When Imam Hassan (PBUH) rose up and saw them, he realized that Marwan had joined them. Imam Hassan (PBUH) approached Muawiyah and Amr ibn Aass and sat at the top of the meeting with them and said: “Why did you call me?” Muawiyah said: “I did not, Marwan wanted it.”

“Marwan! I swear to God you and all of the people who were present when The Holy Prophet (PBUH) was anathematizing you and your father, could never ever deny this fact. God cautions you but you keep doing transgression and rebellious deeds. God and his Prophet are always honest, since Quran says: “as also the Cursed Tree (mentioned) in the Qur’an: We put terror (and warning) into them, but it only increases their inordinate transgression!”{17:60}. Marwan! You and your progeny are from the cursed tree mentioned in the Holy Quran.”

Suddenly Muawiyah jumped and put his hand on Imam Hassan’s mouth and said: “O Abu Muhammad! You were not vituperative?! “