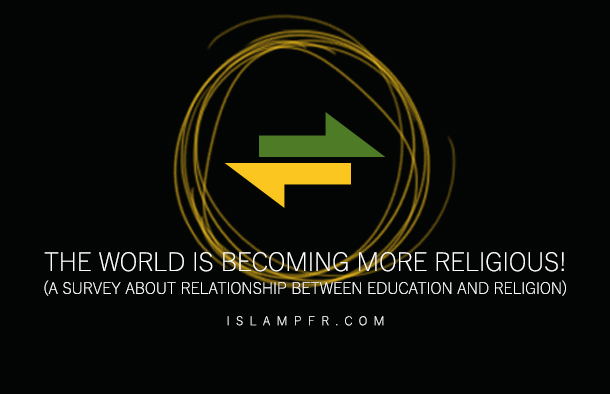 Relationship between education and religion

The World is becoming more religious!

The Zionist controlled mass media has been pushing a certain agenda for a while, namely that the world is becoming less religious. In particular, they are always keen to present the narrative that as people are becoming more educated, the importance of religious belief is dwindling. Recently, this was again regurgitated in an article by Dave Lawler, that “religious observance tends to be higher in countries with lower levels of education.”14 It is obviously not in their interest to present the very different story that as the world population becomes more educated, religious belief increases too. I will present some findings from a very quick look at a range of sources, discuss them, and indicate the respective policy repercussions they could have. This is not an exhaustive analysis, rather it is meant to provide you with a very different viewpoint in the “faith” debate, so please do not succumb to the Zionist apocalyptic doomsday scenarios.

Some of the main findings as brief statements.

Becoming more educated does not turn us into atheists

Atheists would have us believe that it is a sign of intellectual progress to move away from God as we acquire more education and thus more knowledge. Contrary to this, increasing our knowledge actually leads to a greater capacity to appreciate our natural relationship with God and develop greater cognition. The idea that atheism is the default setting for educated people is simply untenable.4 In fact, several years before Pope Francis became pope of the Catholic Church in 2013, psychologists began to debunk the idea that being more educated meant a person was less likely to be religious.12 The other much quoted argument that scientists tend to be atheists has also been thrown out, it has been shown that many smart, reflective scientifically literate people obviously still do believe in God.15 My suspicion with atheism is that it is born not out of knowledge, but out of a very nihilistic mind – (and heart-) set. With more years of education, you are relatively more likely to say, “I believe in God.”2

Christianity is still strong in the US

This comes as no surprise, we all are well aware that whereas Christianity is on the wane in European countries, it is still at healthy levels in the US. For example, in a survey by WIN/Gallup International, data based on a survey of more than 66,000 people in 68 countries found that in Sweden, 18% of those surveyed described themselves as atheist, 55% as non-religious, and in the UK, 11% were atheist, with 58% self-described as non-religious. 7 There is a difference though in people calling themselves Christian and actually being religiously committed. It seems that Christians in Western Europe are less committed than American “Nones” (atheists, agnostics, and religiously unaffiliated).8 A median of just 11% of adults across Western Europe say that religion is “very important” in their lives. That is a lower percentage than American “nones” who say religion is very important in their lives (13%).8 Christianity in Europe is more of an expression of one’s culture, than a true commitment to a strong belief in God.

So why do religious Americans with college education attend services more?

One reason that is given is that attending services is part of the “networking’ that people often engage in the more education they have. This is a finding that has also been observed in Australia, that lower educational attainment is linked to less social participation. People with lower levels of education are less likely to engage in forms of community support, to feel they can have a say, and to participate in social activity.9

Christians are quite to highly religious

The first point to note is that much of the data that the researchers base their analysis on is derived from well-known studies in the US, principally the Cooperative Congressional Election Study 2016, with a sample size of 64,600. It is really interesting getting into the breakdown of the different sub-groups amongst Christians. Starting with the Catholics, 61% of college graduates describe themselves as “highly religious”.2 This is defined by a four-item index of religious commitment incorporating four common measures of religious observance; worship attendance, frequency of prayer, belief in God and the self-described importance of religion in one’s life. Catholic college graduates are more likely to attend church on a weekly basis than their less educated peers.3

Among Mormons, 85% of college graduates go to church at least once a week, compared to 66% of their peers with a high-school education or less.3 92% of Mormons describe themselves as highly religious.2

With college-educated evangelical Protestants, 68% attend church every week, compared to 55% of those who only went to high school.3 8% of the college graduates describe themselves as highly religious.2

Muslims are very religious, irrespective of their level of education

Roughly half of Muslims of all levels of education attend services at least once a week, and nearly all Muslims report believing in God.3 Nearly all Muslim Americans in each educational category (95%) say they believe in God.2

This finding is quite upsetting, really. Only a quarter of Jews with a high school degree or less attend services every week, compared to one tenth of college educated Jews (!) Of the “less educated” Jews, 58% believe in God, but less than a third of their college educated peers do.3 39% of Jews who have not completed college say religion is very important in their lives, but only 25% of Jewish college graduates say religion is very important to them.10

This must be seen against the background of Jews having the most years of formal schooling worldwide!2

Possible policy responses for the US in particular, and the rest of the world

In a nutshell, if government wants to create a more just society based upon (Christian) religious values, it is incumbent on them to maintain high levels of education in their country, and to address the reasons for less educated people not attending services so often. If these people can be encouraged to attend, surely they will find an environment in which they can learn more about their faith from the other more cognizant churchgoers.

Addressing the Jews’ lack of religiosity is a serious matter. One wonders whether this is why Zionism has been able to usurp the way of thinking of some Jewish people! Christianity in Western Europe

The Muslim ummah will do well regardless, as it is blessed with a very strong belief in God. Given that Islam as a faith will have overtaken Christianity as the biggest world faith by 2050 at the latest, a different world order lies ahead in which it is “normal” to be very religious. As the Muslim community enjoys such a robust faith which does not depend upon the level of education, levels of religiosity will increase in all those parts of the world in which there are sizeable Muslim communities. This is bound to have a spillover effect, as the religiosity of the Muslims might reinvigorate the faith of other believers they come into contact with.

The reciprocal benefits of religion and education upon each other

Ryan P Burge states that “after looking through samples and doing some basic statistical analysis: there is absolutely no evidence of a negative relationship between church attendance and educational attainment.”13 He goes so far as to state that “those with the least amount of education are the most likely to never attend…those with graduate degrees are the most likely to attend church weekly.”

There is evidence that those with the highest education also have the highest level of religious cognitive ability.6 Put these two statements together, and the overall picture is that we generally have well educated people forming the backbone of places of worship, as they are the ones who attend frequently. Given that they have high levels of education, they will also have sufficient understanding of the faith to be able to communicate it to others. In turn, these communities will become stronger, as the people attending will benefit from the shared mutual knowledge of their faith. These communities should be tasked with bringing in the less educated too.

Being well educated is then of great advantage for nurturing one’s faith. Not only do we have greater cognitive capacity to understand our faith, we can then also explain it to others, and we have the tendency to become more involved in our religious community, the better educated we are. This in turn strengthens our faith.

Ps, don’t tell this to the Zionists, they’ll probably devise a new scheme to discourage people from pursuing education, because Zionists of course dislike all religiosity. Then again, I know that the Brookings Institution recently appeared to be doing just that, they had a discussion paper titled , “Are Iranian women overeducated?” – expect more of the same, an attempt by them to “dumb down” religious communities…

1 Philip Schwadel, Does Higher Education Cause Religious Decline?: A Longitudinal Analysis of the Within – and Between – Person Effects of Higher Education on Religiosity; The Sociological Quarterly, Vol. 57, 2016 – Issue 4

3 www.sbs.com.au, Why educated Christians are sticking with the church, 27 April, 2017

7 Laura Oliver, Losing their religion? These are the world’s most atheistic countries, www.weforum.org, 25 July 2017

12 Tanya Basu, Here’s why some people are more religious than others, www.time.com, September 22, 2015

15 Ken Taylor, How can smart people still believe in God?

He is for all of humanity