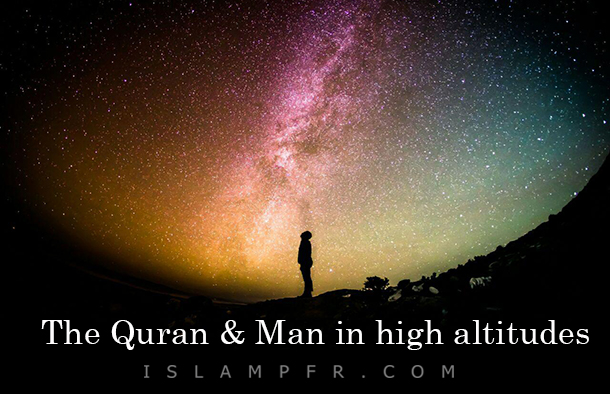 The Quran & Man in high altitudes

Almost 100 years ago, medical researches started address the functions of the human body when rising up in high altitudes, and the effect of being at high atmosphere. Aero- and space medicine gives so much details of this issue, in which the dyspnea is explained in two main causes:

Stages of the symptoms of oxygen shortage phenomena:

These are divided into four stages that relate to air pressure and the level of altitude and the rate of oxygen concentration in blood.
1-     The stage of non alteration, i.e., from the level of sea to an altitude of 3 km. In this stage, the symptoms of oxygen shortage are not present and sight is not affected at day time.

2-     The stage of physiological adjustment, i.e., from an altitude of 3 km to 5 km. Body systems function in this stage in such a way that will not let the symptoms of oxygen shortage appear, unless the period of exposing to such a shortage is elongated, or the person exerts physical effort in such conditions. In that case, rates of respiration, pulse, blood pressure and circulation increase in number and depth.

3-     The stage of physiological disturbance, i.e., from an altitude of 5 km to 8 km. In this stage, body systems, particularly the lungs, cannot afford to function properly or supply the quantity of oxygen needed by tissue sufficiently. Hence the symptoms of oxygen shortage appear. In this stage, a clear explanation is established for man’s feeling of exhaustion, headache, feeling like to sleep, dyspnea and chest tightness when rising up in high altitudes. As a result of air pressure decrease, all air comes out of lungs and alveoli pulmonis, reducing the size of lungs and chest (i.e., the chest becomes really tight).
4- The stage of chest tightness, i.e., from an altitude of 8 km upwards. In this stage, man loses consciousness totally due to the failure of the nervous system, and condition becomes critical.

The Quran which was revealed fourteen centuries ago to Prophet Mohammed (PBUH) states: “Whomsoever Allah desires to guide, He expands his chest to Islam; whomsoever He desires to lead astray, He makes his chest narrow, tight, as if he were climbing up to the sky.” (6:125)

Thus, this verse displays a miraculous similitude when presenting a scientific fact in a very eloquent and accurate style. Points of the miracles of this verse are:
1-     When people first heard of the verse of man’s climbing to sky (space) , they considered it as a sort of imagination, and that Quran regards the ascension to space  in a metaphorical manner. Actually the verse is a prophecy that came true centuries after it was first revealed.

2-     The similitude is very accurate, as climbing to high distances in the air causes chest tightness and the feeling of suffocation. The more the ascension increases, the more tightness reaches so critical and difficult stage that respiration is not possible any more. That’s why oxygen cylinders are taken when ascending up the sky, as in space ships!