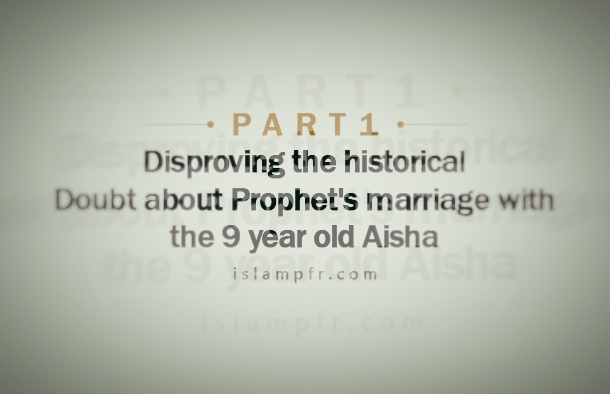 That claim is the issue of Prophet’s marriage with a 6-year-old girl (Lady Aisha) and some people insist on proving that Lady Aisha was married to Prophet Muhammad (PBUH) when she was 6 years old and entered his house when she was nine to prove her supremacy over other wives of the Prophet (PBUH). But, is it true?

Here we are trying to disprove this claim based on authentic references in Sunni books.

First, before entering the main subject we shall find out the correct date of Prophet’s (PBUH) marriage with Lady Aisha and then we will indicate the age of Lady Aisha when she was married to Prophet Muhammad (PBUH).

There are different opinions about the date of the marriage of Prophet Muhammad (PBUH) with Lady Aisha.

Muhammad-ibn-Ismail Bukhari quotes from Lady Aisha herself that Prophet Muhammad (PBUH) married her three years after Lady Khadija had passed away:

It is quoted from Lady Aisha “I didn’t envy any woman like Lady Khadija because, a) Prophet Muhammad (PBUH) used to mention her very much, b) Prophet Muhammad married me three years after the death of Lady Khadija; c) The Lord ordered the Prophet (PBUH) or Gabriel to greet Lady Khadija and promised her a house in paradise which is built by cane.”(1)

And Ibn-Mulaqqan after quoting Bukhari, added:

Prophet Muhammad brought her home in the second year after Hegira. (2)

According to this quotation, Prophet Muhammad (PBUH) married Lady Aisha in the thirteenth year after the call to prophethood and brought her home in the second year after Hegira.

We can conclude from the quotations of some other great Sunni scholars that the marriage of Prophet (PBUH) with Lady Aisha happened in the fourth year after Hegira. Baladhari writes down in his book “Genealogies of the Nobles” about Lady Suda, one of the other wives of Prophet Muhammad (PBUH):

On the other hand, Al-Dhahabi claims that Suda-bint-Zuma was the only wife of the Prophet (PBUH) for four years.

Conclusively, it is obvious that Lady Aisha married Prophet Muhammad (PBUH) in the fourth year after Hegira (four years after the marriage of the Prophet (PBUH) with Lady Suda)

Now let’s calculate the age of Lady Aisha at the time of her marriage according to historical references:

An exact way to calculate the age of Lady Aisha when she was married with Prophet Muhammad (PBUH) is to compare her age with her sister Asma-bint-Abu-Bakr. According to quotations of great Sunni scholars, Asma was ten years older than Lady Aisha and she was 27 year old in the first year after Hegira and passed away in 72nd year after Hegira when she was hundred years old.

Abu No’aym Isfahani writes down his book “Knowing the Companions and their Merits”:

Asma daughter of Abu-Bakr, was the older sister of Lady Aisha from her father side and she was born 27 years before the year of Hegira. (5)

And Tabarani writes down:

Asma, the daughter of Abu-Bakr, passed away in the year of 73 after Hegira after her son Abdullah-ibn-Zubair. She was 100 years old when she died and had been born 27 years before Hegira. (6)

Asma was the elder daughter of Lady Aisha from her father side and had been born 27 years before Hegira. (7)

Abu-No’aym said that Asma had been born 27 years before Hegira. (8)

And Hafiz Haythami writes down:

And Badruddin Ayni writes down:

Asma- the daughter of Abu-Bakr was born 27 years before Hegira and she was the 17th who converted to Islam and passed away 73 years after Hegira after the death of his son Abdulla-ibn-Zubair when she was 100 years old. At this age none of her teeth were lost and she was in sound mind. (11)