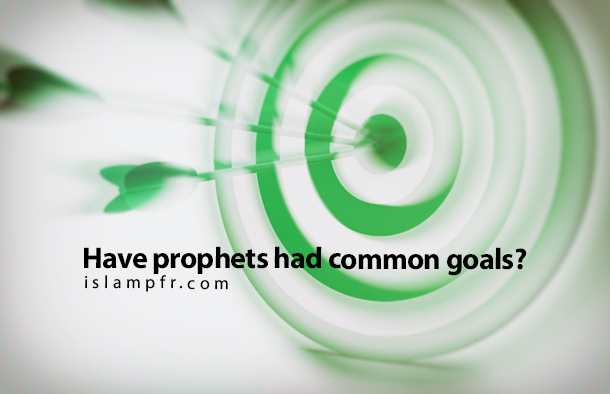 Prophets who have been appointed by God for the guidance of mankind have made efforts towards this mission with a synchronized plan and common goals. Studying the personality of the holy prophets, their way of personal and social life, the content of their message and their invitation makes mankind aware of the existence of some kind of synchronization and correlation.

Multiple prophets have all been messengers and representatives from God and his wisdom has required that there be total synchronization among his messengers for the guidance of people.

The basic goals of the holy prophets

All prophets have invited people to obey God. However; there have been differences in employing some of the methods used to establish and reach the goals. One of the most important instances of this correlation is unity in the holy prophets’ goals. According to the Holy Quran; these common goals could be listed as follows:

The first and the most basic teaching of the prophets’ movement is monotheism and the worship of God. Divine prophets have tried to rid people of paganism, idolatry and servitude of non-God; leading them towards worshipping and servitude of the unique God. Their other goals have all been a means to reach this final goal.

“We sent a messenger to every nation, saying: ‘Worship Allah and avoid the idols.’ (1).”

“We sent Noah to his people. He said: O my people! Worship Allah! Ye have no other god but Him. I fear for you the punishment of a dreadful day (2)!”

“Abraham (AS) said: O my people! I am indeed free from your (guilt) of giving partners to Allah. For me, I have set my face, firmly and truly, towards Him who created the heavens and the earth, and never shall I give partners to Allah (3).”

“Not a messenger did we send before thee without this inspiration sent by us to him: that there is no god but I; therefore worship and serve me (4).”

Imam Ali (PBUH) has also indicated this single goal of all prophets in his speeches about the philosophy of revelation and prophecy and said: “The pure God made prophets take an oath of revelation so that they deliver the prophecy to people. When in the period of ignorance most people ignored the oath to God and did not recognize the right of God and turned to false Gods in front of Him and Satan kept people from knowing God and separated them from worshipping him, God appointed his prophets and from time to time, according to mankind’s requests, sent his prophets continually so that they reclaim the loyalty to the oath of nature from them and they remember the forgotten blessings and by delivering divine commandments, give them God’s ultimatum and reveal the hidden capabilities of intellects and introduce the signs of God’s might (5).”

Speaking of monotheism among pagans and idolaters means repudiating all gods and denying habits and traditions of ignorance and fighting oppressors and it naturally comes with objections and resistance. The lives of prophets are full of objections and animosity of a group of people towards them. The Holy Quran introduces prophets’ adversaries as three sets: “مَلَأ” meaning agents and the nobility, “جباران” meaning oppressors and rebels and “مترفان” meaning the luxuriating rich who do not think of anything except their own comfort:

“Never did we send a warner to a population, but the wealthy ones among them said: “We believe not in the (message) with which ye have been sent.” They said: “We have more in wealth and in sons, and we cannot be punished.” (6)”

“The leaders of his people said: “Ah! We see thee evidently wandering (in mind) (7).”

“Such were the “Ad” people: they rejected the signs of their Lord and Cherisher; disobeyed His messengers; and followed the command of every powerful, obstinate transgressor (8).”

The mentioned groups opposed prophets in different ways, labeling them as insane, wizards, power-hungry, etc. or tried to entice and threaten them; however, the prophets would withstand all the difficulties and would not desist from their invitation.

About a thousand years of Noah (PBUH)’s struggle with his stubborn people, also years of Abraham (PBUH)’s theoretical and practical encounter with idolaters and Nimrod, furthermore Moses (PBUH)’s unremitting battle with Pharaoh and tolerating the narrow-mindedness of Israelites and finally twenty three years of the prophet Muhammad (PBUH)’s effort and Jihad with kaffirs, pagans and feudists are instances of the divine prophets’ struggle.

Another pillar of the holy prophets’ invitation is informing people of the teachings regarding the Resurrection. Believing in the Resurrection is a requirement of believing in monotheism. Mankind is from God and will return to Him; therefore, living in this world is not the basic goal of mankind, as his life continues after death. Were death the end of a man’s life, his creation would be pointless and absurd, while the Glorious God denies that and says: “Did ye then think that we had created you in jest, and that ye would not be brought back to us (for account)? (9).”

Deterring and annunciating people have been the prophets’ two complementing duties in the way of calling to the Resurrection. The Holy Quran says: “Messengers who gave good news as well as warning, that mankind, after (the coming) of the messengers, should have no plea against Allah: For Allah is exalted in Power, Wise (10).”

It has been stressed in some verses of the Holy Quran that the goal of deterring is deterring from torture in the afterlife:

“Raised high above ranks (or degrees), (He is) the Lord of the Throne (of authority): by His command doth He send the Spirit (of inspiration) to any of His servants he pleases, that it may warn (men) of the Day of Mutual Meeting! (11)”

“O ye assembly of Jinns and men! Came there not unto you messengers from amongst you, setting forth unto you my signs, and warning you of the meeting of this Day of yours?” They will say: “We bear witness against ourselves.” It was the life of this world that deceived them. So against themselves will they bear witness that they rejected faith (12).”

Divine prophets had an important and grave responsibility towards human society, always seeking a justice-based society, thanks to which unjust differences would go away, leading people to live together in peace:

“We sent aforetime our messengers with clear signs and sent down with them the Book and the Balance (of Right and Wrong), that men may stand forth in justice (13).”

The Holy Quran has expressed this important mission which is one of the pillars of the divine prophets’ movement through various elucidations:

“It is He who has sent amongst the unlettered a messenger from among themselves, to rehearse to them His signs, to sanctify them, and to instruct them in scripture and wisdom,- although they had been, before, in manifest error (14).”

“We sent Moses with our signs (and the command).”Bring out thy people from the depths of darkness into light! (15)”

“Those who follow the messenger, the unlettered Prophet, whom they find mentioned in their own (scriptures), – in the law and the Gospel; – for he commands them what is just and forbids them what is evil; he allows them as lawful what is good (and pure) and prohibits them from what is bad (and impure); He releases them from their heavy burdens and from the yokes that are upon them. So it is those who believe in him, honor him, help him, and follow the light which is sent down with him, – it is they who will prosper (16).”

The best way for repentance & making up for the past