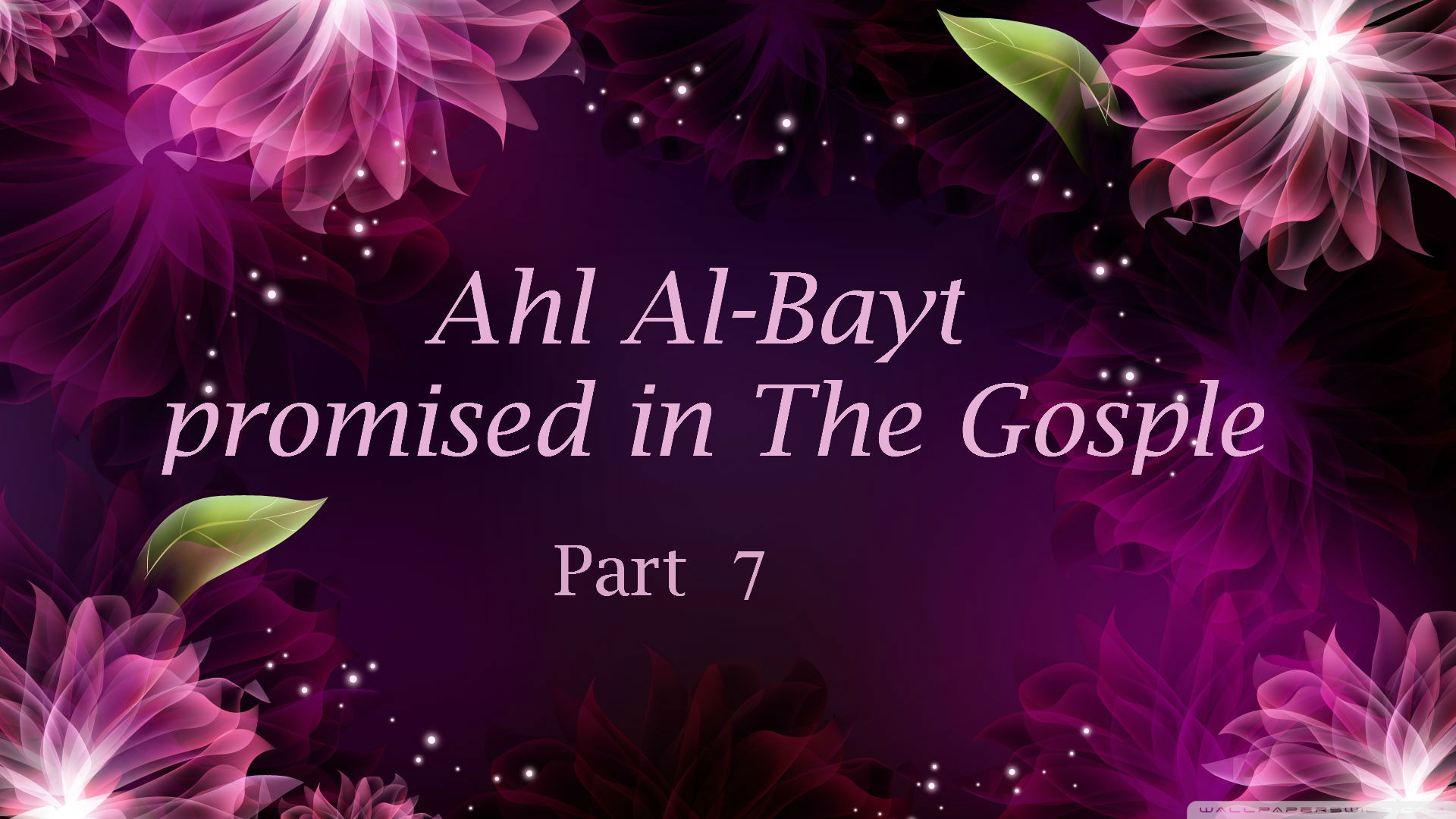 It is also noteworthy to mention that glad tidings to twelve leaders after the Prophet Mohammad (SBUH&HA) are also mentioned in Sunni documents; here as a sample, we are going to narrate a few of such glad tidings:

It is said that the Prophet Mohammad (SBUH&HA) has said that after him there would be twelve Amirs (commanders) and all of them would be from the Qoraish.

Sheikh Sulayman Balkhi Hanafi in his Yanabiu’l-Mawadda, ch. 76, reports from Fara’idu’s-Simtain of Hamwaini, who reports from Mujahid, who reports from Ibn Abbas: that a Jew named Na’thal came to the Holy Prophet and asked him questions about Tawhid (Unity of Allah). The Holy Prophet answered his questions and the Jew embraced Islam. Then he said: “O Holy Prophet, every prophet had a wasi (vicegerent). Our Prophet, Moses Bin Imran, made a will for Yusha Bin Nun. Please tell me who is your wasi?” The Holy Prophet said: “My wasi (vicegerent) is Ali Bin Abi Talib; after him are Hasan and Husain, and after them are nine Imams, who are the successive descendants of Husain.”

Narrated Jabir bin Samura: I heard Muhammad saying, “The (Islamic) religion will continue until the Hour (day of resurrection), having twelve Caliphs for you, all of them will be from Quraysh.”

The Prophet said: “This religion remains standing until there are twelve vicegerents over you, all of them agreeable to the nation, all of them from Quraysh.”

Masrooq rates that someone asked Abdullah Ibn Masood, “O Abaa Abd al-Rahmaan, did you ask the Messenger of Allah how many caliphs will rule this nation?”.

Abdullah Ibn Masood replied, “Yes, we did ask the Messenger of Allah and he replied, “Twelve, like the number of chiefs (nuqabaa) of Bani Israel””

Ahmad ibn Muhammad al-Tha’labi in his Manaqib and Tafsir, Ibn Maghazili Faqih Shafi’i in his Manaqib and Mir Seyyed Ali Hamadani in his Mawaddatu’l-Qurba (Mawadda VI) : narrate from the second caliph, Umar bin Khattab, who, when the Holy Prophet established fraternal and brotherly ties between the companions, said, ‘This Ali is my brother in this world and in the hereafter. Among my descendants he is my caliph; he is my successor (vicegerent) in my community. He is the heir to my knowledge; he is the payer of my debt. What belongs to him belongs to me; what belongs to me belongs to him; his benefit is my benefit and his loss is my loss. He who is a friend of his is really a friend of mine and he who is an enemy of his is really an enemy of mine.”

When the āyah “And warn your relatives of nearest kin” (26:214) was revealed, the Prophet gathered his family around him and treated 30 of them to a meal and then said: “Who is willing to guarantee my debts and commitments so that he should be with me in paradise and should be my successor from among my family.” A person whom Shurayk did not name, answered: O Messenger of Allah you are like a sea, who can take charge of this responsibility. The Prophet repeated his statement to his relatives, and ‘Alī replied: “I will undertake this responsibility.”

I heard the Prophet of Allah (Peace and blessings be upon him) saying, “The promised Mahdi will appear from my progeny, from the descendants of Fatimah.”

Once again the Quran and Sunnah will govern the people, this time by the rightly guided Khaliph, Imam Mahdi. Islam will gain an upper hand and will be firmly established in the land. The oppression, tyranny, and darkness that prevailed all over the globe will be replaced with justice, peace and equity. The smile, which was long forgotten, will be restored on the Muslim faces and the inhabitants of the Heaven and Earth will be pleased with him. Everybody will be happy to the extent that even birds and wild animals will rejoice in his rule. Heaven will send rain profusely, livestock will be in abundance, land will become fertile, the earth will become green and sprout with abundant fruit and vegetation.

(The above content has been taken from various hadith, which can be found in Abu-Dawud and from the hadith narrated by Abu-Saeed al-Khudri in Musnad Ahmad)

It is reported from Abu Hurayrah that the Prophet(S) said:

“What will be your reaction when the son of Mary(A) descends and your Imam(AJ) is among yourselves?”

Mahdi will already have arranged a Muslim army and will be on the verge of leading the Muslims in morning prayer when Prophet Jesus Peace be upon him will descend and Kill the Dajjal.

Jalal al Din al Suyuti, in his Tafsir of Quran, Durr al Manthur, in regard to laylatil qadr [Surah 97] says that laylatil qadr [Night of Qadr] stands for the Holy Prophet and his Ahl ul Bayt.

In Kaafi, vol. 1, p. 249 it is reported that Imam Abi Ja’far (SBUH) explained to a man asking questions that in the same manner that the Amr was not manifest at the beginning and only the Prophet and Hadrat Ali and Hadrat Khadijah (SBUT) worshipped Allah until Allah commanded the manifestation of the Amr, their Amr would not also become manifest until Allah’s command for manifestation of the Amr at the hand of Hadrat Mahdi (SBUH).

Until then we keep the Truth alive for pure hearts seeking the Truth … .

Yes, the “only” Religion of Allah, from Aadam to Nooh to Ibrahim to Moosa to ‘Eesa to Mohammad (Salaam Be Upon Them), i.e. Islam (Qur’an 3:19, 85; …), is complete and firm and secure with the Wilayat (Allah Bestowed Lordship) of Mohammad and his AhlulBayt (SBUT).

And finally in a celestial moment, among one of these same wandering seconds, he shall come.

He who in utmost beauty will spread the True Islam -the only Religion of Allah- all over the world, he who has a heart as vast as the entire existence, he who himself is the heart of existence … .

Mahdi (May Allah Hasten his Appearance) shall come and after his magnificent Emergence, by the Permission of Allah, the Prophet ‘Eesa (SBUH) will descend, and join him in an unforgettable Prayer:

The Prophet Muhammad (SBUH&HA) has said:

‘Eesa (Jesus) will descend to the Maqdas land, upon a passage way called ‘Afiq’; then he (‘Eesa) shall enter the Bait al Maqdas while people will be in (preparation of ) the Morning Salaat (Prayer); and the Imam (Mahdi) will step back, but ‘Eesa shall give him (Mahdi) the lead, and (‘Eesa) will perform the Salaat behind him (Mahdi) based on the Shari’at of Mohammad, and (‘Eesa) will say:

“YOU ARE THE AHLUL BAYT THAT NO ONE SHOULD TAKE PRECEDENCE OVER”.