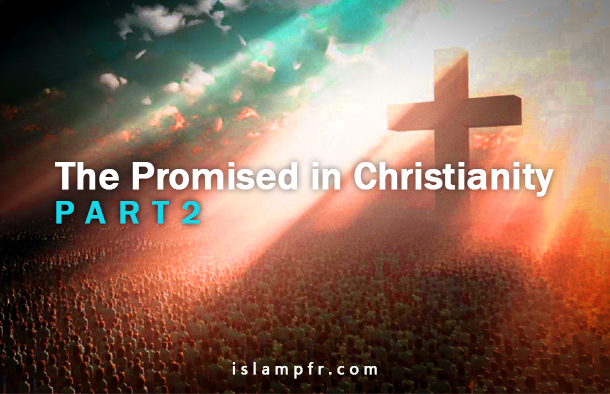 The Promised in Christianity

Islamic narratives affirm Second Coming of Jesus (PBUH). For example, the Prophet Muhammad (PBUH) said: “«وَالَّذي نَفْسي بِيَدِهِ لَيُوشَكَنَّ اَنْ يُنَزَّلَ فيكُمُ ابْنُ مَرْيَمَ حَكَما عَدْلاً وَ اِماما مُقْسِطا» (1), I swear to God, whom my life is in his hands, that, Jesus, Son of Mary, will certainly descend among you as a righteous judge and a just leader.”

But Islam has introduced Imam Mahdi (PBUH) as the promised savior, and introduced him as Leader of the Apocalypse: ««كَيْفَ بِكُمْ (اَنْتُمْ) اِذا نَزَلَ عيسَي بْنُ مَرْيَمَ فيكُمْ وَ اِمامُكُمْ مِنْكُمْ؛: how you will be when Jesus Son of Mary descends among you and your leader will be from yourselves. (Bihar al-Anwar, volume 51, p 88)

Or in another hadith narrated from Imam Baqir (PBUH) we read:

Before the resurrection, Jesus will descend to the world, and no one of Jewish and Christian nations are left unless they believe in him before their death, and that majesty (Jesus) will pray after Imam Mahdi (PBUH) as his follower. (Bihar al Anwar, volume 53, p 51)

Undoubtedly, it’s clear for every aware researcher that Islamic narratives and Christian beliefs are so close to each other in relation to reappearance.

Comparing of reports from Islamic narratives with regards to the unimaginable advances in science in reappearance time, creating social welfare, signs of reappearance and other things with what were mentioned will clearly prove this claim.

This issue can provide discussion and same thinking between Islamic and Christian expectation.

It should be noted that even in some gospels accepted by a group of Protestants, reappearance of a savior is clearly mentioned who is descendant of Arabic Prophet: “In his will, Jesus tells Simon Peter: Simon! God told me I advise you to Master of prophets who is major of Adam’s children and illiterate Arabic Prophets. He comes at the period when advent is close and prophecy is widespread and fills the world like flood.”

Annunciation of reappearance of Imam Mahdi in Bible

Based on many annunciations mentioned in Bible, Jesus Christ will appear in Palestine, following the uprising of Imam Mahdi- Allah hasten his reappearance –, and will rush to help him and will say his prayer behind him to let Jews and Christians and his followers know their duties and convert to Islam and become supporters of Imam Mahdi (PBUH).

Thus, in last days of life and perhaps during his life, he had strict recommendations and commands to his companions and disciples about his Second Coming to earth. He asked them to wait for his Second Coming and ordered them to be aware, alert and ready for it. Here are some parts of his recommendations that are brought as a proof to our claim and to awaken the Muslims.

Some of the annunciations of Bible are as follows:

So Jesus left the temple when his disciples came up to him to show him its buildings. “Do you see all these things?” he asked. “Truly I tell you; here no stone is put on the other, unless it is fallen.” As Jesus was sitting on the Mount of Olives, the disciples came to him privately. “Tell us,” they said, “when will this happen, and what will be the sign of your Second Coming and the end of the world?”

Jesus answered: “Watch out that no one deceives you. For, many will come in my name, claiming, ‘I am the Christ,’ and will deceive many. You will hear of wars and wars news, but don’t be upset, because these happenings are necessary; however, the end is still to come. Nation will rise against nation, and a country against the other. There will be famines, cholera, and earthquakes in various places…

At that time if anyone tells you, ‘Look, here is the Christ!’ or, ‘There he is!’ do not believe it. For false Christ and false prophets will appear and they will perform great signs and miracles to deceive people, and if it was possible, they would even deceive the elect. See, I have told you ahead of time.

So if anyone tells you, ‘There he is, out in the wilderness,’ do not go out; or, ‘Here he is, in the inner rooms,’ do not believe it. For as lightning that comes from the east is visible even in the west, so will be the coming of the Son of Man…

Immediately after the distress of those days the sun will be darkened, and the moon will lose its light; the stars will fall from the sky, and the heavenly bodies will be shaken. Then will appear the sign of the Son of Man in heaven. And then all the peoples of the earth will mourn when they see the Son of Man coming on the clouds of heaven, with power and great glory…

Now learn this lesson from the fig tree: As soon as its twigs get tender and its leaves come out, you know that summer is near. So when you see all these things, know that reappearance is near, even, right at the door. Truly I tell you…

Heaven and earth will decline, but my words will never decline.

“But no one knows when that day or that hour will be, not even the angels in heaven,   except the Father. As it was in the days of Noah, so it will be at the reappearance of the Son of Man…

Therefore be aware, because you do not know on what day your Lord will come. But understand this: If the owner of the house had known at what time of night the thief was coming, he would have kept awaking and would not have let his house be broken into.

So you also must be ready, because the Son of Man will come at an hour when you do not expect him. Who is the faithful and wise servant then, whom the master has put in charge of the servants in his household to give them their food at the proper time? It will be good for that servant whose master finds him doing so when he returns.

When the Son of Man comes in his glory, along with all sacred angels, he will sit on his glorious throne. All the nations will be gathered before him, and he will separate each nation from the other as a shepherd separates the sheep from the goats. He will put the sheep on his right and the goats on his left. Then the King will say to those on his right, ‘Come, you who are bestowed by my Father’s blessings; and take your inheritance, the kingdom that was prepared for you since the creation of the world.

Jesus said to them, “Truly I tell you, at the resurrection, when the Son of Man sits on his glorious throne, you who have followed me will also sit on twelve thrones, judging the twelve tribes of Israel. And everyone who has left houses or brothers or sisters or father or mother or wife or children or fields for my sake will receive a hundred times as much and will inherit eternal life.”