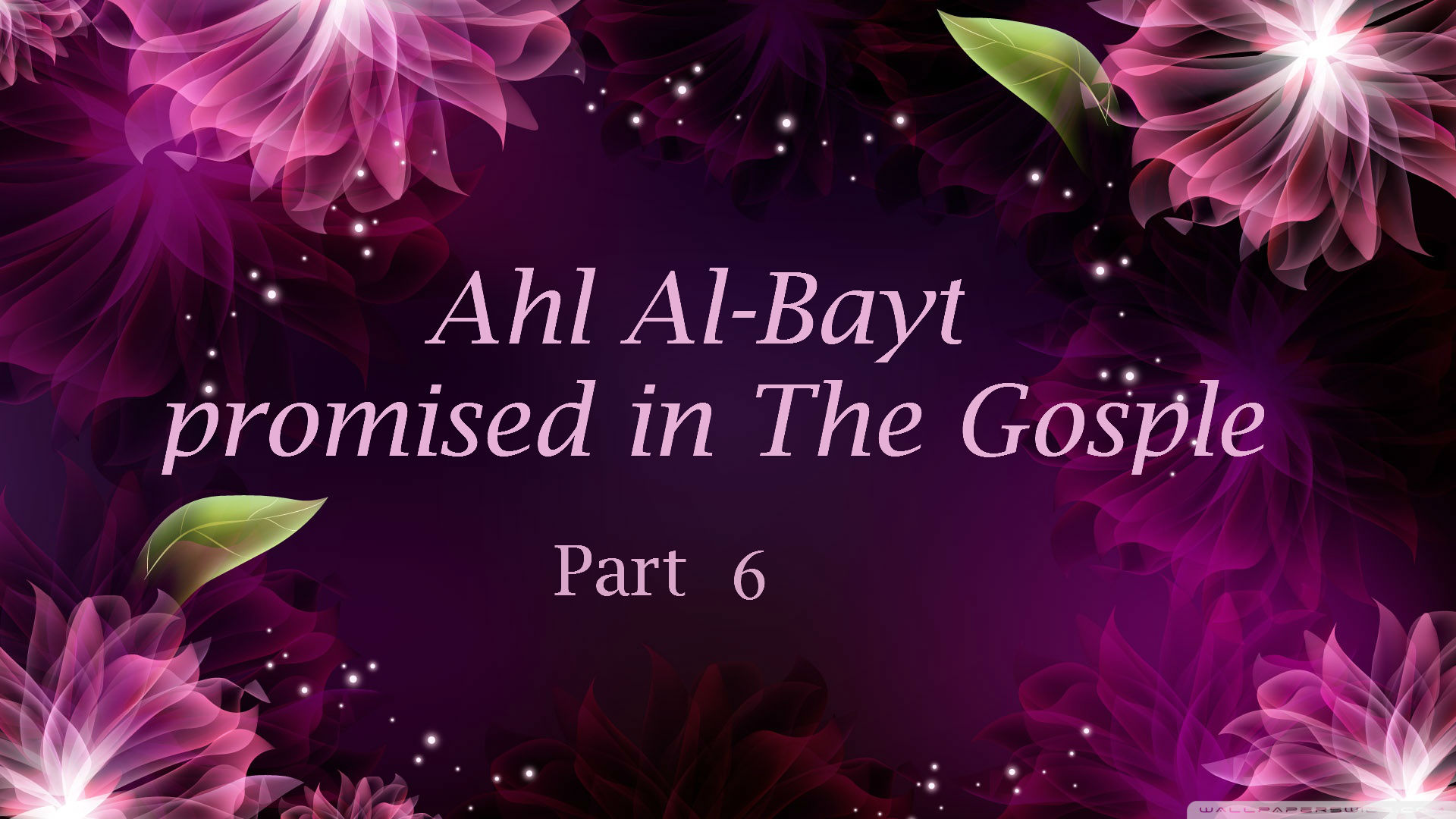 AhlulBayt (PBUH), the Promise of Gospel –

In the genuine Shi’ah Hadith collections -Narrations narrated by fourteen Infallible Ones (SBUT)- there are many authentic Hadiths which clearly express the Matter of Allah Appointed twelve Infallible Imams (SBUT),and the Matter of  their Imamat (Allah Ordained Leadership); in such Hadiths the twelve Imams’ names, particulars and … -even before their births- have been mentioned.

Here -may it Please Allah- we are going to present an English translation of the text of a green color heavenly Lawh (Tablet)  with writings of Light that Allah had bestowed upon the Prophet Mohammad (SBUH&HA) which he (SBUH&HA) gave it to his beloved daughter, Fatemah (SBUH); this celestial Lawh is known as Fatemah Zahra’s (SBUH) Lawh. Again we emphasise on the vital fact that translations can never be taken as original and thus the Arabic text must also be referred to:

“In the Name of Allah, the Compassionate, the Merciful

This is a writing from the Aziz (Undefeatable) and Hakim (All-Wise) Allah for Mohammad, His Nabi (Prophet), and His Noor (Light), and His Safir (Ambassador), and His Haajeb (Screen …), and His Dalil (Guide); Rooh al Amin brought it to him from the Presence of the Lord of the Worlds .

O Mohammad! Extol My Names, and be grateful for My blessings, and deny not My Grace.

Indeed I am Allah, there is no deity except I; I am the Destroyer of the arrogant, and the Degrader of the oppressors, and the Rewarder at the Day of Judgment.

Indeed I am Allah, there is no deity but I. He who hopes for other than My Fazl (Grace), or fears from other than My Adl (Justice), I shall distress him a distress I have done no one of the worlds.

So, serve and worship Me exclusively, and rely on Me only.

And I have honored you by your two [grand]sons, the two born of the Lion (Ali), Hassan and Hosain.

And I  have set Hassan the Mine of My Knowledge after expiration of his father’s time, and have set Hosain the Treasure holder of My Revelation, and honored him by martyrdom, and concluded him to Salvation; he is more superior than all martyrs, and his status more exalted of all martyrs.

I have placed with him My Taammah (most ultimate) Kalemah (Word) and My Baaleghah (most conclusive) Hojjat (Proof, Argument …).

Based on his Etrat (children …), I reward and punish.

The first of them is Ali, the Master of all worshipers, the Adornment of My past Awliya [plural of wali].

And his son, similitude of his Mahmood (Praised) forefather, Mohammad al Baaqer, the Splitter (Analyzer …) of My Knowledge, and the Mine of My Hekmat.

And doubters regarding Ja’far shall perish. Any one rejecting him, is the same as rejecting Haq (Allah, the Truth, …).

The Say  is from Me.  I certainly honor Ja’far’s position and surely I indeed make him joyful through his Shi’ah, and his helpers, and his Awliya.

And Moosa whom I have chosen; after him a blind and dark Fitnah (turmoil, trouble, conspiracy, trial, …) shall occur.

Behold! Surely the string of My incumbency will not be cut, and My Hojjat (Proof) will not remain unknown, and indeed My Awliya will not be miserable.

Anyone denying one of them, undoubtedly has denied My Grace, and anyone changing a verse of My Book, has fabricated lies against Me.

Woe be unto the fabricators of lies, the deniers.

After the ending of Moosa’s time, My servant and My beloved and My chosen one, Ali, My wali and My helper; he is whom I shall place the heavy load of Prophethood upon, and through it, I shall bestow Power upon him. Behold! surely anyone denying the eighth has denied all My Awliya.

At the end, a despicable arrogant person shall kill him, And he shall be buried in a city built by a righteous servant, next to My most wicked creation.

The Rightful Say is Mine. Surely I shall make him joyful with Mohammad, his son and Caliph (Successor) after him, and the heir of his Knowledge.

And he is the Mine of My Knowledge, and the Position of my Secret, and My Hojjat (Proof) upon my creation.

No servant believes in him unless I shall set heaven his abode, and I will accept his intercession  for seventy of his family members, all of whom surely deserving the Fire.

And I will conclude to Salvation for his son Ali, My wali and My helper, and the Witness among My creation, and My Amin (trusty) of My Revelation.

From him, I shall bring out the Inviter to My Path, and the Treasure holder for My Knowledge, al Hassan.

And I shall complete it through his son, M-H-M-D, a Mercy for the worlds.

Upon him shall be the Perfectness of Moosa (Moses), and the Brightness of ‘Eesa (Jesus), and the Patience of Ayyoob (Job).

My Awliya in his time (of Disappearance) will be degraded, and their heads will be taken in the same manner that the heads of the Turks and Deylamites are taken as offerings.

They shall be killed and burned, and they will be fearful  and terrified and frightened.

The earth will be colored (red)  with their blood, and wailing and crying will rise among their women.

They are whom, upon them is Salawaat of their Lord and His Mercy, and they are the guided ones.”