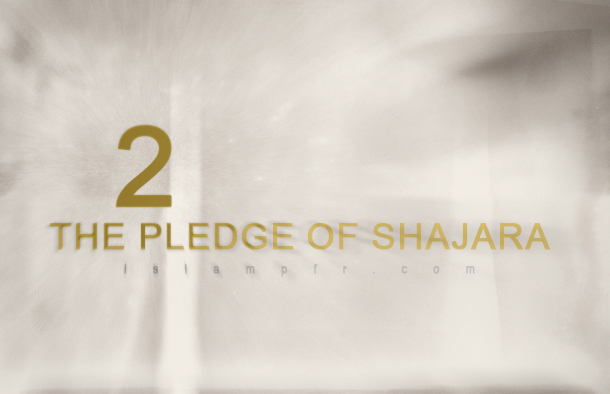 The Pledge of the Shajara (Tree)

Every contract has some provisions.

The provision not to run away in battles:

Since in previous battles like the battle of Uhud, many of companions fled battlefield and left Prophet alone, he took the pledge from them at Hudaybiyah that they never ever run away from any battle.

Muslim Naysaburi has written in his book (i.e. Sahih):

It is narrated from Jabir that he said: On the day of Hudaybiyyah, we were one thousand and four hundred that swore fealty to the Prophet (PBUH), Umar was holding his arms under the tree of Samurah and said: we sworn before the Prophet not to run away from battles, not to swear fealty till death.

Interestingly, the name of the second caliph is among people who fled. Bukhari writes down in his book (i.e. Sahih):

Abu Qatada says: The year in which the battle of Hunayn occurred, I was with Prophet (PBUH), when two armies faced each other, Muslims were fleeing, then returned.

I saw a man of polytheists overpowering a Muslim and was going to kill him, I turned around and hit him between his shoulder and neck with a sword from behind, that polytheist turned back and seized me so tightly that I felt as if it were death itself, he released me and fell down and died. I met Umar, asked him why are people fleeing? He said this is the will and order of Allah.

The Attributes of the god in his Essence and his acts

Fakhr Razi says on this subject:

The implication of the term “[the God] won’t like” is that He doesn’t appreciate and reward them because of what they do, in this case, Allah’s action is one of the Attributes of Act.

Now we study the verse accurately once more:

“Allah’s Good Pleasure was on the Believers when they swore Fealty to thee under the Tree: He knew what was in their hearts, and He sent down Tranquility to them; and He rewarded them with a speedy Victory.”

Firstly it was mentioned that pleasure is of the Attributes of Act.

Secondly Allah’s pleasure is not with all who swore fealty; but it is conditional upon the fact they would be “believer”, and excludes anyone who wasn’t a true believer or has any doubt about the prophecy of the messenger of Allah.

Thirdly Allah’s pleasure is with the people who swore fealty, provided that they don’t forget the pledge in Hudaybiyyah and hold to their promise and avoid actions that transform Allah’s pleasure to His wrath and anger.

So we cannot conclude from the verse of «pledge of Ridwan» that god is eternally pleased with the second Caliph and deny or justify, some acts like usurpation of the succession right of Imam Ali(PBUH) and invasion to the house of revelation and … .

Now we consider one of the Sunni sect’s reasoning that:

If Allah and His Messenger didn’t mean all of companions, they would said explicitly that Allah is pleased with some or many of them and this is because of the Shia’s hostility toward companions that overlook generality of the verse and decide for Allah and don’t regard it general.

In response to their reasoning we present two examples from the Quran that Allah has used general expression but He didn’t meant all cases.

First example: in the Surate of Baqarah, verses 47 and 122 Allah says: {I preferred you over all others} meaning Allah preferred Children of Israel over others.

Second example: Allah says in Surate of Ghafir, verses 45-46: {God protected him against their evil plans and the people of the Pharaoh were struck by the most horrible torment. / They will be exposed to the fire in the mornings and the evenings and on the Day of Judgment, they will be told,” People of the Pharaoh, suffer the most severe torment} It means that Allah punished the People of Pharaoh due to their deeds.

There are some evidences in the verse itself that implies the intent of the verse is just some of the believers who swore featly to Prophet (PBUH), not all of His companions.

Firstly: in the continuance of this verse and the following verse, Allah gives two promises to these believers that: they will reach a victory and acquire numerous gains.

Secondly this verse was revealed in the 6th year after Hijra in the year of the peace of Hudaybiyyah, And the closest conquest was the battle of Kheybar that provided the most booties.

(There is a difference between acquiring booty and bringing booty to Prophet (PBUH) and acquiring it after distribution, and in this verse Allah says “acquire gains”, meaning that they acquire it)

Fourthly: it is written in biography of some of these companions who were in attendance in the pledge of the tree that they fled in the battle of Kheybar rather than fight or returned without any conquest and it was then that Prophet (PBUH) said the well-known  Hadith al-Raya’ (flag) about Imam Ali (PBUH): “Undoubtedly the messenger of Allah (PBUH) said on the day of Kheybar Tomorrow I will give the flag to a man who Allah will conquer by his means, He loves Allah and His messenger and Allah and His messenger love him” (Sahih Al-Bukhari, Chapter: The battle of Kheybar, Hadith 3888)

So undoubtedly this verse is not about who fled or didn’t conquer and didn’t acquire booty.

In this Holy verse Allah has announced his pleasure in a specific time and says: “Allah’s Good Pleasure was on the Believers when they swore Fealty to thee under the Tree” so it’s not in the way that if they commit a sin or a crime in the future they have Allah’s Pleasure as before.

And so it is said in this Holy verse that Allah is pleased with any believer who swore fealty, not that anyone who swore fealty is believer, and the difference between these two meanings is crystal clear.