pictures of “Jesus Christ “(PBUH) inside of Kaaba not to be removed, is it true or not? 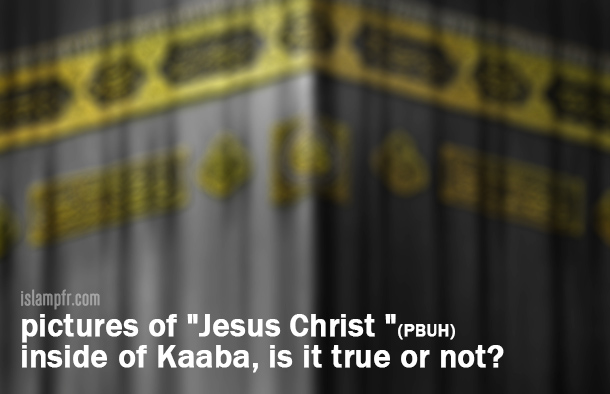 It is said that at the time of Mecca’s conquest, Prophet Muhammad (PBUH), ordered to remove all the pictures inside of Kaaba but when he reached at the pictures of “Jesus Christ “(PBUH) and his mother Lady “Mary”, he ordered the pictures no to be removed , is it true or not?

“Azraqi” (D. 864), in his book, “History of Mecca”, which is probably the oldest available book, written about Mecca that we know, writes down some quotations in a chapter titled “the events about the reconstruction of Kaaba by Quraysh”:

At the time of ignorance in Mecca there were many pictures and images inside Kaaba, one of them was of Jesus Christ and Lady Mary (PBUT). Jesus Christ (PBUH) was sitting on his mother’s lap in that picture. The house of Kaaba was in this condition until the 8th year after Hegira when Muslims entered Mecca, and Prophet Muhammad (PBUH) ordered all the idols inside of the House of Kaaba to be broken.

This question may arise that if the house of Kaaba was regarded as the place of idols, how was it then that the images of Jesus Christ and Lady mary (PBUT) were hung in this House?

The answer is that the one of the reasons that Arabic people in the age of ignorance placed their idols at the House of Kaaba, was that they regarded the idols as their intercessors before god and in fact these idols were mediators between the god and the people.

Thus it is not unlikely that the pictures of Jesus Christ and Lady Mary (PBUT) were present in Kaaba; because it is probable that the Christians were trying to reach the lord by these images based on the same reasoning. And this belief was not contradictory to the beliefs of Arabs to make any prohibition. It also shows that Kaaba was a divine and sacred place even for Christians, at least for those who were in contact with Hejaz.

Is Solomon a legendary king or a historic one as a Prophet? Part 1

The reason for Imam Hussein’s mourning for the...

s.a do you have the details of AZRAQI’s book in arabic or ingilish or any european language (publisher, trnaslator, page number etc.) pls. as I wish to write an article about this issue. Ive checked some late arabic re-prints of Azraqi, they did not have this part you have mentioned. I need to cheque this information as it s suspected that may be this was added to Azraqi’s book later on by the commentetors or translateor stc. Jazakallahu Kharan. my e mail is: fetth3@gmail.com

salaam Alaykum
maybe it helps you: