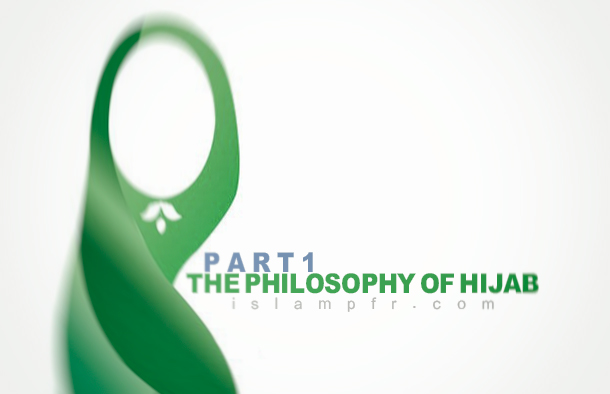 The Philosophy of Hijab

Hijab is one of the firmest and most logical matters that exist in Islam and it has seen a lot of emphasis. However, the enemies have spared no effort in dimming or destroying it.

To begin the discussion, we will focus on the history of Hijab in the period before Islam. After that we will refer to the reasons for the Hijab being obligatory, which can be proved via three methods:

In the section on chastity, after defining it, we will focus on the verses that discuss chastity, which include: verse 273 of Al-Baqara (Surah 2) and verse 33 of Al-Noor (Surah 24), after which we will cite narratives from Ahl-Al-Bayt (PBUT). Finally, to conclude this discussion we will refer to the words of the Supreme Leader of the Islamic Republic of Iran.

In the section on modesty, we will focus on a verse of the Holy Quran in which modesty has been discussed (verse 25 of Al-Qasas (Surah 28)). After that, we will point to narratives regarding modesty; furthermore, we will refer to words from Muslim and non-Muslim thinkers regarding modesty.

Deviations and wrong doings can mostly be seen in the young generation, and the root of all this deviation must be observed in their views and beliefs regarding religious matters.

One of the issues that the enemies of Islam have heavily invested in, is to encourage the women to put the veil away and to take off the chador or scarf from the heads of women. The enemy using baseless reasons, questions this theological coverage and considers it as a kind of imprisonment of women. Their reasons may appear attractive or interesting at first glance; however, the thinking and insightful human needs little reflection and research to find what the enemies of Hijab are after and why they are insisting so much on this matter.

One of the most important and perhaps main things that the westerners and the enemies of Hijab are after is the “freedom” of women. And of course, those interested in profiting from women would find problems with Hijab and its reasons.

The matter mentioned as freedom of women, is in fact not the freedom of women, but that of the men. The freedom of men in comfortably looking at any woman, or to make a relationship with her, or to make her his tool for enjoyment. The woman must wear makeup so that the man can enjoy himself, the woman must destroy her face and body so that the man can profit from it. I always tell myself, does the woman value herself so little that she is prepared to work on her face and body for hours, so that a man may get interested in her, and what an interest would that be! One that is gone once the man is satisfied. And in the end the woman is the loser, not the man.

The westerners’ murmur of the freedom of women began from the 19th century. At that time factory managers were looking for a cheap, least troublesome and least expecting workforce and from there they headed the matter of the freedom of women, pulling women from their homes to the factories, and by doing so they reduced the worth and munificence of women and made more money.

Ayatollah Khamenei states: “In the same western countries, up to a few years ago – and that is not too long ago – women studying in higher education did not have the right to get a (written) certificate   of their higher education degrees! More recently, in some western countries – including England – one of these western countries’ magazines – and I do not want to name that magazine or that country – had introduced an elderly woman who in 1917 had studied up to the doctorate degree. However; they had not given her a university degree! And then it asks, why had they not given her a university degree? It says: because until 1947 in England, they would not give studying women university degrees and used to say that a woman should not get a university degree! These have come today to claim women’s rights! In the same years that such humiliation was seen in western culture, “Lady Amin” had received permission for Ijtihad from the top scholars of those days of Islam and in Isfahan, was teaching philosophy and religious jurisprudence in the seminary! This, is Islam.” (1)

In the religion of Islam great value and importance has been granted to woman, some of which we shall point to within the discussions.

The history of Hijab

One of the matters that the enemies of hijab place a lot of focus on is that, according to them, in the ancient times the women of Greece, ancient Iran or the Jews had no duty to maintain Hijab and the arrival of Islam introduced it as an obligation for women.

Historical evidence tells us that in most kinfolks and world religions, Hijab has existed among women, and even though in some periods the matter may have been dimmed by the governors or kings, it has never disappeared completely.

With these explanations, we will look at different periods of history:

The Grand Larousse encyclopaedia, regarding the coverage of Greek women says: “Greek women in past periods covered their face and bodies down to their feet. This coverage, which was transparent and very beautiful, was made in Kos and Amorgos islands. Also, Phoenician women had red coverage.”

In ‘Sparta’ girls were free before marriage, but after marriage they would cover themselves from the gaze of men. Remaining drawings tell that women covered their heads; however, their faces were open and when they went to the markets, they were obligated to cover their faces, whether virgin or married. Hijab also existed among Siberian women, and the inhabitants of Asia Minor and the city of Maad (and Persian and Arabs). Greek women enjoyed stronger Hijab, such that when they left home, they covered their entire body down to their feet with a chador and no body humps were visible. (2)

Will Durant, the famous western writer, in his book The Story of Civilization, regarding “Artemis” the “goddess of chastity” who was one of the ancient Greek gods, says: “Artemis, is the goddess of chastity and is the greatest example (and role model) for young girls, having a strong, athletic and agile body, adorned with ornaments of chastity and virtue.” (3)

Also regarding one of the tribes that lived in 900BC, it says: “Further up from Armenia and next to the Black sea, the “Scythians” roamed the wilderness. These wild and big boned people were very powerful half Mongol and half European war tribes that lived in caravans and kept their women very hidden.” (4)

The historian also writes in another section: “The only way women can visit their friends and relatives and participate in religious celebrations or theaters is by being in full Hijab.” (5)

Regarding the cover of ancient Iran’s women who had a very difficult Hijab common among them, Will Durant says: “Women of the upper classes did not dare to leave home without hooded stretchers. They were never allowed to mix with men openly. Married women did not have the right to see any man, even their father or brothers. In carvings that have remained from Ancient Iran, no woman’s face can be seen and none of their names are present.” (6)

The book “Ancient Iranian Clothing” says: “The main thing to be noted is that according to embossed carving and statues before Christ, the clothing of women (females) in that period from a shape perspective (with little differences) is the same as men’s clothing.” (8)

In the great Achaemenid Empire too males were similar in clothing to females. Regarding the special clothing of women during this period it says: “By studying remaining carvings from that time, we are faced with native women that have interesting clothing. Their shirt is simple and long or has short sleeves. We also see other women from that period that ride horses on the side. These wear a rectangular Chador on their entire clothing and underneath that, wear a shirt with a long skirt and under that again, a long shirt down to their ankles is visible.” (9)

In the Parthian periods too, as before, the Hijab of Iranian women was complete. Regarding this we read that: “The clothing of Parthian women was a loose, wrinkled, long shirt down to the floor with upright collars. They had another shirt that they would wear on top of the first and its height compared to the first was shorter and also open collared. On top of these two shirts they would wear a Chador”. (10)

During the Sasanian period, which had Zoroastrian religious orders performed in their country, women also had complete Hijab. Regarding the clothing of women, the following has been mentioned: “Chador which was utilised by women from previous periods, had various usage during this period.” (11)

In ethical principles of  the “Talmud” which is one of the important religious texts and in fact the Jewish codified law and regulations, it is said: “If a woman broke Jewish law, for example by going among people without having something on her head or thread in the streets or confabulate with every type of man or her voice was so loud that when she spoke in her house, her neighbours could hear her speak, in that case the man had the right to divorce her without paying her dowry.” (12)

In the bible, it is mentioned: “Paul in his letter to the Corinthians clarifies:”

“I want you to know that the head of every man, is Jesus and the head of every woman, is man and the head of Jesus, is God. Every man who is praying or prophesying with a covered head is disgracing himself. But every woman who has her head uncovered while praying, is disgracing herself,; for she is the same as the woman whose head is shaved. For, if a woman does not cover her head, let her also shave her hair and if cutting hair or shaving is obscene, she must wear it; Because man is not from the woman, but woman is from man and the man has not been created for the woman, but woman for the man. Hence the woman must honor her head because of the angels. Judge for yourselves, is it proper for a woman to pray to God with her head uncovered?” (13)

Also in the bible, Paul’s letter to Timotheus says: “Also the women adorn themselves with modesty and abstinence, not with hair, gold and expensive pearls, such that perhaps women may preach through good deeds.” (14)