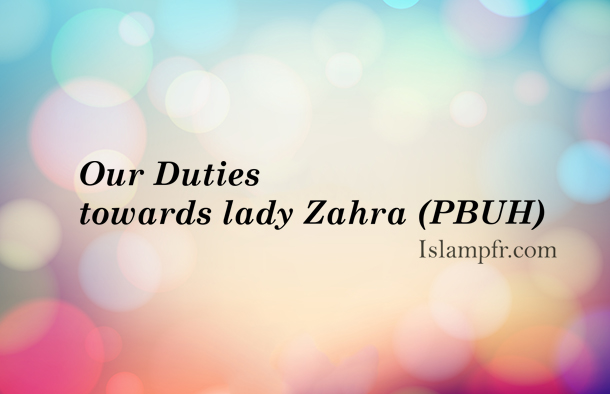 Our Duties towards lady Zahra (Pbuh)

Her virtues like her concern about training and upbringing children, education, patience and dignity, chastity, devoutness and theosophy, dedication to her children’s upbringing and caring her husband, confrontation to injustice and full scale endeavor to support the rightness and defending flawless Imam (Pbuh) of her time, are obvious in her life. Here we introduce this divine lady and her virtues according to our recognition and ability.

1- Recognition of Imam and defending Imam with her life

When Lady Zahra (Pbuh) was at the end of her glorious life and was unwell, some of Medina’s women presented and asked her about her health. Her ladyship, despite her illness, defended her husband’s neglected right and mentioned the obvious injustice of men of the time about Amir-al-Muumanin and uncovered the root of these tyrannies and betrayal, praised her oppressed husband and recounted the consequences of these betrayal about Imam Ali (Pbuh):

“ When Fatima was inflicted with her illness, the women of the Muhajireen an Ansar gathered around her and said: How are you doing daughter of Allah s Messenger?’  Fatima praised Allah, prayed for her father and said: “I have become, by Allah, to have feelings of resentment for your world, detesting your men; I have casted them after testing them, hated them after examining them. Thus, shameful is the defiling of honor, playing after being serious, striking the soft rocks, the slackening of spears, the foolishness of judgments and the misguidance of wants.

Evil indeed are (the works) which their souls have sent forward before them (with the result) that Allah’s wrath is on them, and in torment will they abide.

Certainly it (Allah s wrath) has control of their affairs, held them responsible (for deserving it), and launched its disagreement on them.

So, may the unjust ones be done away with, cursed, and damned.

How they have snatched it a way from the foundations of the Message, the fundamentals of prophethood and guidance, the place of descent for the Devoted Spirit, and he who is clever in the affairs of this world and the hereafter? (She means that they usurped Ali’s right.)

Surely; (their action) is clear loss? Why were they hostile to Abu Al-Hassan?

They took vengeance, by Allah, from him, for his unbiased sword, his carelessness about his death (i.e., his unprecedented courage), his deadly assaults his severe encounters, and his anger for the sole sake of Allah, Exalted is His Name. By Allah, had they prevented each other from assuming the reigns of power, which Allah s Messenger entrusted to him, he would have held it and led them smoothly,

He would not have harmed them the size of a thread,

Nor would his followers stammer, (meaning they would have lived in harmony under his rule).

He surely would have delivered them to a spring pure, lush, abundant, flowing over its banks-yet its sides are not muddy.

He certainly would have brought them back satisfied and advised them secretly and publicly without providing himself with any availing thing.

Nor would he favor himself with the worldly things with any gain, save that which would quench the thirst of the thirsty, and feed the hungry.

Surely the abstinent would have been distinguished from the desirous, and the truthful from her.

Had the people of the town believed and feared Allah, We should indeed have opened out to them (all kinds of) blessings from Heaven and Earth; but they rejected (the truth), and We brought them to book for their misdeeds. …”[1]

This speech, which is in the extreme edge of rhetoric and eloquence, was delivered by Fatima (Pbuh) and is related in old reference books of Shia and Sunni scholars. Her deep vision about Imam Ali (A.S.) and her grievous heart, her solid determination and will and her defense of Imam in the most difficult time is completely observable through this speech.

In another speech, Lady Zahra (Pbuh) after praising Imam Ali and denoting his position adds:

“whenever they ignited the fire of war, Allah extinguished it; and whenever the thorn of the devil appeared, or a mouth of the polytheists opened wide in defiance, he would strike its discords with his brother (Ali, (A)), who comes not back until he treads its wing with the sole of his feet, and extinguishes its flames with his sword. (Ali is) diligent in Allah’s affair, near to the Messenger of Allah, A master among Allah’s worshippers, setting to work briskly, sincere in his advice, earnest and exerting himself (in service to Islam); “[2]

After the martyrdom of Prophet Mohammad (Pbuh), the usurpers of leadership of Muslims, several times tried to trespass the house of prophet, and in the last invasion they broke the sanctity of its privacy, burned the door and entered the house. Meanwhile, Lady Fatima (Pbuh), showed her fortitude and courage and confronted them. First she reminded the will of prophet Mohammad about the family of this house, then since his sermon was shamelessly denied, she prevented them from entering the house. Despite his efforts they entered the house and tried to take Imam Ali (A.S.) by force to mosque to give homage. But since Lady Fatima (Pbuh) intervened, they kicked her seriously, and her injuries eventually leads to her death and martyrdom:

“Abu Bakr sent Umar to Ali and his companions, to take them out of Fatima’s house and said: “If they refused, fight them” then Umar gathered some firewood to burn the house. Lady Fatima saw him and said:

“Where are you going son of Khattab? Do you intend to burn my house?”

After these threats, they turned to more offenses. When the hypocrites entered the house of prophet, Lady Fatima (Pbuh) shielded her body for Imam Ali and sacrificed her life for Imam, and her child whom she was bearing, died.

“When Fatima came between them and her husband. Omar commanded Qunfud to hit her with his lash, so he hit her with the lash on her back And in another narration: Qunfud forced her to the corners of her house and pushed her and broke one of her ribs and she miscarried her child. She stayed in bed after the beating and miscarriage till she died as a martyr due to all of that”[4]

3- Confrontation with tyranny and claiming the rightness

After the martyrdom of prophet Mohammad (Pbuh), horrible events happened in the Islamic society; one of these events was the usurpation of Fadak which was the property of Lady Fatima (Pbuh) and was bestowed to Lady Fatima while Prophet was still alive.

Lady Fatima, repeatedly came to usurper Caliphs and claimed her undoubted right. But every time they refused her legitimate right by unfounded reasons.

Bukhari which is the most authentic reference of Sunni Muslims, relates from Ayeshe that Lady Zahra repeatedly claimed Fadak from Caliphs and were discontent about them and this issue remained unsettled to the end of her life:

There are some important issues in this narration from one of the most important quotation books of Sunni sect, including Lady Fatima’s anger with new Caliphs which remained unsettled to the end of her life and her repeated claim of Fadak and her persistence in demanding her definite right.

This narration reflects Lady Zahra’s morality which does not surrender to oppression and claims her right. Because it is not permitted to be silent to tyranny and the right should be taken. So following the manner of Lady Fatima who is the lady of both worlds, we should confront and fight tyranny and injustice in our life, as Lady Fatima proved to the world that an obvious injustice has happened in the body of Islam and all should be aware of it. So it is our duty to do our best to introduce the manifestations of tyranny and immorality to people and don’t be neutral about it.

Sheikh Sadooq who is one of the greatest Shiate scholars, relates a quotation from Prophet Mohammad (Pbuh) about the humility and obedience of her daughter:

“Fatima is a human huri. Whenever she keeps up prayer in her Mehrab (altar) before her Lord, her light illuminates to the angels in Heaven just as a star shines to mankind on Earth. So Allah, Exalted is His name, says to the angels: ‘My angels, look at my servant, Fatima, who is the mistress of all my female servants, keeping up prayers before Me. Her limbs shake from fear of Me and she worships Me whole heartedly. “[6]

This quotation demonstrates the Lady Fatima’s (Pbuh) spiritual position with Allah and her obedience and devoutness. This position is so excellent that god praise her by his prophet’s tongue. Any Muslim should follow her path of devoutness and obedience.

This is another quotation about Lady Fatima (Pbuh) by Sunni books:

“It is related from Aisha that : In a dark night, I put a threat to a needle with the light of Lsdy. Fatima’s face and that’s why she is called Zahra”[7]

The spiritual rank of Lady Fatima (Pbuh) is so high that Imam Sadiq (A.S.) calls her equal of Imam Ali (A.S.) who is the best creature after Prophet Mohammad (Pbuh).

“Yunus –ibn- Zebian relates from Imam Sadiq (A.S.): If god had not created Imam Ali (A.S.) there were no equal for Lady Zahra (Pbuh) on earth”[8]

She is equal to a flawless Imam, who is the successor of Prophet Mohammad (Pbuh), and according to the verse of “Mobahele” he is the prophet Mohammad’s (Pbuh) self, and this is the best reflector of Lady Zahra’s position.