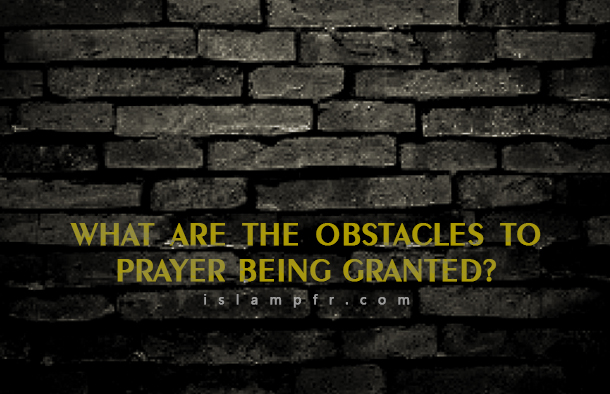 What are the obstacles to prayer being granted?

In hadith sources, multiple reasons have been stated for prayer not being granted of which some instances are indicated in this note.

Basically, sins cause the purity of man to completely fall apart; sins may lead to disaster to be brought down, prayers not being granted, livelihood to be cut, bliss of life to be vanished, etc. Basically, this is the characteristic and the natural effect of sin. This is what’s indicated in our religious sources.

It’s related in a hadith that God says: “Sometimes my worshipper has a request from me and I shall grant it, but he commits sins and then I tell the angels: This worshipper, has subjected himself to my wrath, by committing sins, and disqualified himself for my blessing, henceforth he shall not see his requests granted unless he submits to my servitude (1).”

Imam Ali (PBUH): “Sin is an obstacle to prayer being granted. You have closed the gate of prayer by sins. Thus, don’t consider it unlikely that your prayer be granted late (2).”

“I wonder how a person prays and consider it being granted late, while they have blocked the way of granting by sins (3).”

Imam Sajjad (PBUH): “Sins that obstruct prayers from being granted are: 1. Having bad intentions, 2. Filth of the soul, 3. Hypocrisy with religious brothers, 4. Not trusting (in God) to grant request, 5. Delay in obligatory daily prayer until the time passes, 6. Abandoning approaching God through goodness and charity, 7. Swearing and using offensive words (4).”

Ibn Abbas says: This verse was chanted to Prophet Muhammad (PBUH): “O people! Eat of what’s lawful and pure in the Earth (6).” Sa’ad ibn Abi Waqqas raised and said: O Prophet of God! Pray so that God grants my prayer. Prophet Muhammad (PBUH) said: “O Sa’ad! Make your food pure so that your prayer be granted (7).”

Another obstacle to prayer being granted is doing wrong to other people and being content with the tyranny of the tyrant over the oppressed. If anyone do anything wrong to his religious brother or other Muslim people and trample their rights, God shall not answer him and shall rage at him whenever he supplicates to God and raises his hand in prayer.

Tyranny breaks the bond of divine love, as God Almighty says: “Indeed God does not like tyrants (8).”

Prophet Muhammad (PBUH) says: “Indeed God shall not grant the prayer of an oppressed who has imposed such tyranny over the other (9).”

“Do not impose tyranny because then you will pray and your prayer shall not be granted and you’ll ask for rain and rain shall not fall and ask for help (from God) and you shall receive no help (10).”

Imam Ali (PBUH): “The Exalted and Sublime God gave revelation to Jesus, the Son of Mary, (PBUH) that tell the nobility of Israelites: Do not enter any of my houses except with pure hearts and saggy eyes and clean and free-from-tyranny hands. And tell them: Be aware that I shall not grant the prayer of any of you who has any liability to any of my creatures. (11).”

Imam Sadiq (PBUH): Anyone who gives excuse to a tyrant in his tyranny (justifies his tyranny), God shall put under the domination of someone who shall oppress him, then if he prays [to be released from oppression], God shall not grant his prayer and shall not give him any reward against the tyranny that is imposed over him (12).”

It’s been quoted; Israelites suffered from famine for seven years and God Almighty gave revelation to his prophets that; “If you come to me on foot, as your knees get rubbed and you raise your hands to the heavens so high that it reaches the edges of the heavens and you pray so much that your tongues get tired of praying, I shall not grant the prayer of any of you and I shall have no mercy on any weepers amongst you until you reimburse your liabilities to other people.” They did so and that same day it rained (13).

Another obstacle to prayer being granted is disobedience to parents, in a way that their heart breaks and they become dissatisfied and displeased.

Prophet Muhammad (PBUH): An impediment to prayer is disobedience to parents (14).”

Imam Sadiq (PBUH): On of the sins that reject prayers is disobedience to parents and hurting them (15).”

Prophet Muhammad (PBUH): “O people! God says unto you: Bid other to do good and forbid them to do wrong before you pray unless I don’t grant your prayers and you will ask from me and I don’t give you and ask for my help and I don’t help you (17).”

Prophet Muhammad (PBUH): “If people do not bid others to do good and forbid them to do wrong and do not follow the righteous among my family, God shall appoint the wicked amongst them to dominate them and at that time the good amongst them shall pray and their prayer shall not be granted (18).”

Imam Musa al-Kadhim (PBUH): You should bid others to do good and forbid them to do wrong, otherwise the wicked amongst you will take your affairs under control and this way the prayers of the good shall not be granted (19).”