The obligations of children in the words of Imam Reza (pbuh) 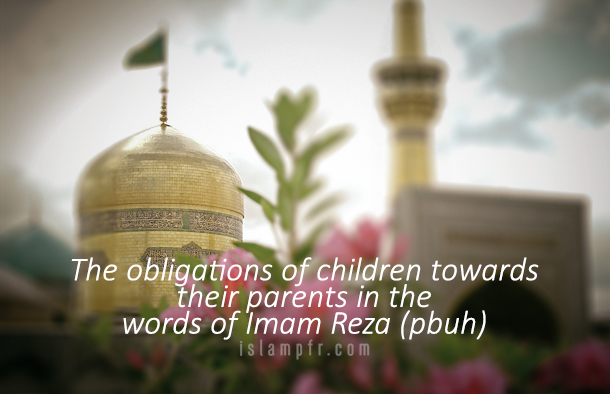 The obligations of children towards their parents

in the words of the Imam Reza (pbuh)

One of the most important moral principles in Islam is having a respectful manner towards one’s parents. The verses of the Holy Quran and Hadiths (the sayings of Prophet Muhammad (PBUH) and the 12 Imams) emphasize this matter a lot. It’s interesting that in many occasions, this is stated right after Tawhid and monotheism. Such an emphasis from The Almighty Wise God, His Esteemed Prophet and the 12 Imams, is the indicator of its importance.

In this article, we are going to take a look at the obligations of children towards their parents in the words of the Eighth Imam (Imam Reza):

1-Having a respectful manner toward parents and obeying them at all times unless they order you to commit a sin. Devote yourself to your parents

Imam Reza (PBUH) has said: “Having a respectful manner toward parents is necessary and essential for every child, even if both of them are polytheists. But obeying them to commit a sin against God is not allowed. (If they ordered you to violate the command of God, don’t obey them)” (1)

Imam Reza (PBUH) has said: “Obey your father and have a respectful manner toward him and be humble in front of him, keep your voice down at all times in his presence because one’s father is like the root of his offspring and the offspring is like a branch of him. You wouldn’t have existed by the will of God if he hadn’t existed. Devote all your life and properties in his way.” (2)

Imam Reza (PBUH) has said: “God has put parents’ rights next to his right and has said: “Be grateful to me and your parents, unto him is the return”

Imam Reza (PBUH) has said: “God orders man be grateful to Him and their parents so if anyone thanks God but doesn’t appreciate his or her parents, she/he in fact hasn’t appreciated God.” (4)

3-Avoid any kind of “disobedience” toward parents

By the word “disobedience” we mean any behavior that bothers one’s parents or makes them sad. It means acrimony, annoyance, belittling and unkindness. Disobedience toward one’s parents means making them angry and breaking their hearts and annoying them. If they are annoyed in anyway, one could deserve God’s torment and punishment.

There is a Hadith from Imam Reza (PBUH) which he narrates from his father and his grandfather (Imam Sadiq) (PBUH) we read: “If there were a word milder than “fie” God would have used it in the Holy Quran” (5)

“Fie”’s equal word in Arabic is interpreted as anything dirty, unclean and insulting, (6) it is used for anything that causes discomfort and irritation. (7)

Literally, the word “fie” in Arabic is an onomatopoeic word and it is used to describe a sound. Any sound that a person uses to express his disgust, sadness, and anxiety. Then, the sound noun “fie” was used as a word, and even some verbs are derived from it which are used for expressing slight discomfort or expressing disgust for small matters. (8)

On the interpretation of the word “fie”, Imam Baqir (the fifth Shia Imam)(PBUH) has said: “The kind of word (“fie”) that God has forbidden us to say to parents is the least verbal abuse and what exceeds this word, and any irritating word that is added to it is forbidden and condemned even more. (9), (10)

4-Pray for parents, donate to charity on behalf of them (give alms for them) and be lenient to them in any situation

Moammer ibn Khalid says: “I told Imam Reza (PBUH), my father and mother don’t acknowledge the right religion. Shall I ask God to forgive them?” Imam Reza (PBUH) answered: “Pray for them, give alms for them and if they are alive be lenient to them (so they may be guided) because Prophet Muhammad (PBUH) said: “I was appointed to teach you to be kind and compassionate not to be disobedient and annoying.”

It is understood from these narrations that observing the rights of parents is so important that in any case, even if your parents are polytheist, they should be observed. Lest anyone think that opposing parents if they are polytheist is a reason to be rude to them. (11)

The Holy Quran says: “Treat your parents in a respectful way and with good manner in this life.” (12)

5-The domain of being respectful toward parents and its extent

From Imam Reza’s viewpoint (PBUH), one’s parents’ rights to their children is not limited to their life and doesn’t end with their death. Children have a responsibility to continue to be kind to their parents even after their death.

They should fulfil their parents’ unfulfilled responsibilities), perform some prayers on behalf of them, fast on behalf of  them, ask God to forgive  them, donate to charity on behalf of them and go to Hajj. They should also fulfill their promise, respect their friends, if they haven’t made any connections to their relatives, they should do it instead of them. If any child does these activities for his parents, God will reward him more than the reward that is considered for his parents.

Since parents’ souls are still connected to this world, while they are in Limbo, good deeds that offspring do for their parents will get to them as gifts and will make them happy.

There isn’t a single believer or faithful person that visits another believer’s grave and read surah Qadr (the 97th surah of the Holy Quran) seven times for them unless God forgives both the reader of surah and the dead person. (13)

The consequences of misbehavior toward parents

God has forbidden disobedience toward parents; because when one does this, she/he will not be blessed by God anymore. It will also prevents them from respecting God’s orders and respecting their parents. It will result in ingratitude to God’s gifts and blessings and will result in having a few children and discontinuation of their generation.

Disobedience toward parents leads to not being respected and their rights won’t be recognized and appreciated as much as they should be and as a result, relative bonds will break and parents will stop parenting their children and will relinquish from their role. Indeed these are the unpleasant results and consequences of a child refusing to respect her/his parents. (14)

The results of having a good behavior and respect toward parents:

2-Having more wealth and getting God’s blessing.

4- Getting forgiveness from God for sins.

6-Acceptance of prayers by God.

7-Blessing of God in life.

8- Effects of sins are vanished and you become bright spiritually

10-Passing away easily and without much pain.

We were in Najaf  (a city in Iraq), one day my mother asked me to wake up my father for lunch. I went to the upper floor of our residence and I saw that my father had fallen asleep while studying. I thought that I had to wake him up in a way that would cause him any disturbance. I kneeled down and put my lips on my father’s sole and I kissed it a few times until my father woke up because of its tickle.

When he saw how polite and respectful I was, he asked: “Is it you, Shahab al-Din?” I answered: “yes” he raised both his hands to sky to pray and prayed for me: “My son! May God add to your honor and make you a servant of Ahl al-Bayt and then Ayatollah Mar’ashi Najafi added: “Anything I have is because of my father’s prayer for me.” (15)

10- The scholars of the study of Usūl al-fiqh (it is an Arabic word which roughly translates to Principles of Islamic jurisprudence. It is the study and analysis of the origins, sources, and principles upon which Islamic jurisprudence is based) say that every word refers to two meanings: 1- the meaning that is understood directly from the word in the sentence (aspect) 2- the meaning that is not mentioned in the sentence and is understood from the structural form of the sentence (concept).  As far as respecting parents is concerned, the verse “and don’t tell them “fie”” (the Holy Quran 17:23) refers to prohibition of saying “fie” and being disrespectful to  parents, if we just rely on this meaning, and we have  just  considered the aspect but what can be understood from the concept, is the prohibition of beating and insulting parents. Because beating is worse than saying “fie” and it is surly condemned much more.