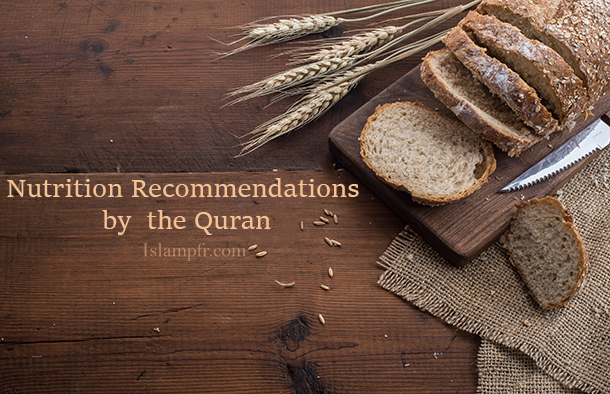 Avoid forbidden substances as stated in the Qur’an

The Qur’an has briefly outlined four forbidden things. -[animals] which dies of itself (carrion)-blood-flesh of swine

The Qur’an (5:3) has listed ten unlawful things in detail which the four cases mentioned above and the rest are as follows:

–    strangled Animal-    Animals that beaten to death –    An animal that has killed by a fall –    Lost animal that killed by being smitten by the horn-    Animals that which wild beasts have eaten –    An animal that is sacrificed on stones set up (for idols) Dead animals were often died by the cause of diseases, eating grass, or of high intensity of weakness, and aging, and of fear and horror. It is obvious that consumption of such meat would be harmful. Because of not any movement in carrion, they don’t have any blood gush and blood bursts; and as a result, some contaminated blood or poisoning remains in the body. By the above five types of sanctions, God excited Human beings in order to make them try on livestock’s protection, conservation, nutrition, and health; and [God orders them to prevent] livestock from getting lost, strangled, beaten, thrown from a height, attacked in a battle of animals [aroused especially by men] and attacked by wild animals; In addition, [God orders them to prevent livestock] from the evil and truculent people who stimulate animals to battle against each other for humans’ fun and watching.

In reply to why carrion is prohibited to be eaten, Imam Sadigh (Pbuh) said:” The blood freezes in carrion and it returns to its body, so its meat gets indigestible and unpleasant because its meat is eaten with its blood.”

Many diseases are transmitted through blood. Sometimes the microbe itself and pathogenic factors and sometimes secreted toxicity which are come out from them can be transmitted through the blood to different parts of the body. In many other cases under diseased circumstances, various changes emerge in blood composition and perhaps one of the reasons for halal slaughtered animals is due to this function.

There are also other items which must be considered such as the existence of enzyme in the kidney of this animal which make an impact on histidine (essential amino acid) and change it into histamine. Every day it is reported new cases of this animal’s novel infections.

One of the most serious poisoned cases can be caused by eating leftover and rotten meat. Imam Sadegh (Pbuh) says:”your body breaks tangled from three things and sometimes the body is killed from which rotten meat is one of those three things.

In regard to quality of food, Imam Sajjad (Pbuh) said:”your belly’s rights which you should concern are those you must not eat any forbidden things whether low or high”.One of the instances of forbidden ones is geophagy. Prophet Muhammad (PBUH) said:” Do not eat earthy matter because it causes illness, makes the abdomen enlarged, and changes the face yellow.” And he quoted in another position if a person who eats soil seems to have helped in killing himself. According to the Quran (5:91) God says:“Satan only desires to cause enmity and hatred to spring in your midst by means of intoxicants and games of chance, and to keep you off from the remembrance of Allah and from prayer. Will you then desist?” God states elsewhere (4:43):”o you who believe! do not go near prayer when you are intoxicated until you know (well) what you say

According to the Quran ( 2:219):”They ask you about intoxicants and games of chance. Say: in both of them there is a great sin and means of profit for men, and their sin is greater than their profit.

Alcohol leaves harmful effects in the digestive tract, in the blood circulation, in the peripheral and central nervous system, and in kidney and it has also many social losses.

It is quoted in the Quran (16:69):” in which there is healing for men.” It is determined nowadays the healing effects of honey.

1-Taenia solium is the pork tapeworm belonging to chlorophyll cestodes in the family Taeniidae. It is an intestinal zoonotic parasite found throughout the world, and is most prevalent in countries where pork is eaten. From Wikipedia.

2-Trichinella is the genus of parasitic roundworms of the phylum Nematoda that cause trichinosis (also known as trichinellosis). Members of this genus are often called trichinella or trichina worms. A characteristic of Nematoda is the one-way digestive tract, with a pseudocoelom (body cavity made up of only an ectoderm and endoderm). From Wikipedia.

3-Leptospira (Greek leptos, “fine, thin” and Latin spira, “coil”) is a genus of spirochaete bacteria, including a small number of pathogenic and saprophyticspecies. Leptospira was first observed in 1907 in kidney tissue slices of aleptospirosis victim who was described as having died of “yellow fever.” From Wikipedia.