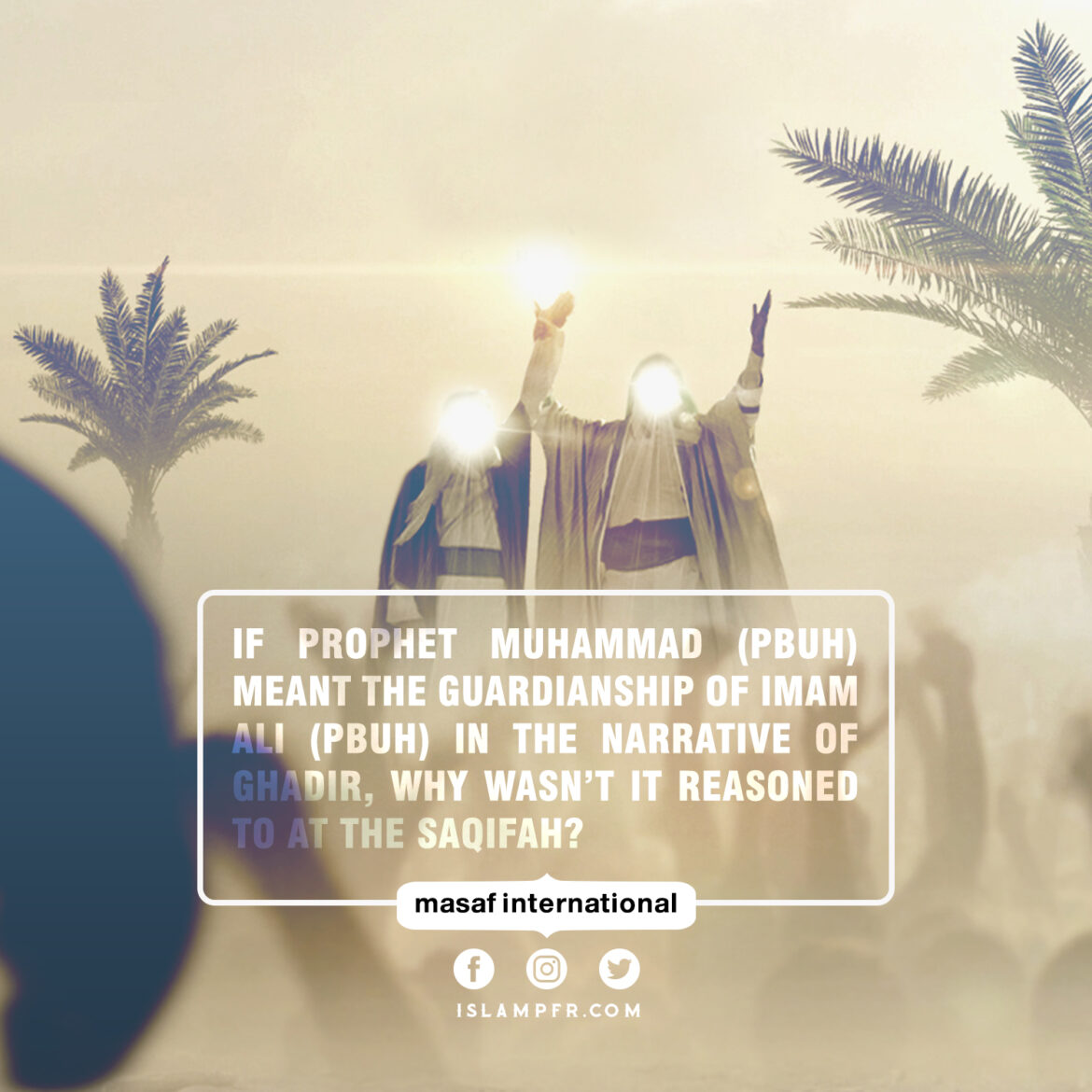 If Prophet Muhammad ᴾᴮᵁᴴ meant the guardianship of Imam Ali ᴾᴮᵁᴴ in the narrative of Ghadir, why wasn’t it reasoned to at the Saqifah?

The Saqifah was a canopy wherein some tribes gathered to make important social decisions. Three days after Prophet Muhammad ᴾᴮᵁᴴ passed away, the Helpers and the Emigrants gathered at the Saqifah of Bani Sa’idah (a tribe) to elect the Caliph. The reasoning of the followers of Abu Bakr on the gathering at the Saqifah of Bani Sa’idah, which were based on the tribal traditions of the Ignorant time, created the most important deviation in Islamic society through history, and the path of guidance and leadership of the Islamic community was deviated from its true position. Hereon, the question is why neither the Emigrants nor the Helpers have mentioned the narrative of Ghadir at the Saqifah despite its certainty?

For the following reasons:

1. The attendants at the Saqifah were those who disobeyed the command of joining Usama’s army

One of the causes for not reasoning to the narrative of Ghadir at the Saqifah is that all of those presented there disobeyed the command of joining Usama’s army:

As it has been mentioned consecutively in historical sources of Shia and Sunni, Prophet Muhammad ᴾᴮᵁᴴ at the end of his honourable life, commanded Usama ibn Zayd to prepare an army and also commanded the Muslims to join his army and be prepared to fight against the enemies of Islam under Usama’s direction. He gathered his soldiers and encamped at Jorf, six kilometres from Medina.

“On Thursday morning, Prophet Muhammad ᴾᴮᵁᴴ handed the flag to Usama and said, “With the name of God, do jihad in the path of God and fight against the infidels.” Usama went out with his flag and prepared some flags and handed them to Buraydah ibn al-Husaib Aslami and encamped at Jorf. All of the titled Emigrants and Helpers were assigned to join that army; including Abu Bakr, Umar, Abu Ubaidah, Sa’d Ibn Abi Waqqas, Sa’id Ibn Zayd, Qatada Ibn al-Nu’man, and Samalah Ibn Aslam Ibn Harish.”

2. Not all the events of the Saqifah have been narrated

Of course, no one can say for sure that the narrative of Ghadir was not reasoned to at the Saqifah; because Sunni scholars have devoted all their efforts to omit any signs of the guardianship of the progeny of the Prophet ᴾᴮᵁᵀ from their books during these fourteen centuries, and it has also been proven that narrating the Companions’ disputes is an unforgivable sin in Sunni Islam; so that some of them have claimed consensus that it is necessary to omit all which have been narrated about the disputes among the Companions. We suffice with a few statements from Sunni scholars in this regard:

Ahmad ibn Hanbal believed that if someone narrates the disputes and conflicts of the Companions, he should be punished by the ruler of the time, and if he does not repent, he should remain in prison until he dies. Ibn Abi Ya’la states in Tabaqat al-Hanabilah (History of the Hanbalites):

“Narrating the goods of the Companions of the Messenger of God ᴾᴮᵁᴴ and not narrating their bads and conflicts with each other are proved by obvious reasons… It’s not okay to narrate their bads or criticize them and if one did so, the ruler has to punish him and the ruler is not allowed to forgive him, but he should be tortured till he would repent; if he repented, he should be forgiven but if did not so, he should be tortured and kept in prison till he dies or changes his mind.”

And Ibn Taymiyyah al-Harrani considers the concealment of the Companions’ disputes as the religion of Sunni Islam.

“Avoiding the narration of conflicts among the Companions had been from the religion of Sunni Muslims.”

And most importantly, Muhammad ibn Abd al-Wahhab considers the silence regarding the Companions’ disputes as the consensus of the Sunni community and considers those who condemn Mu’awiyah out of this consensus and consequently not Sunni Muslim.

“It is the consensus of the Sunni community that the conflicts among the Companions should not be narrated and nothing but good things should be said about them; as a result, if one says something about Mu’awiyah or someone else, he will be out of this consensus.”

Now, considering this severe censorship, it’s reasonable to expect the Sunni narrators not to narrate all the events of the Saqifah and not to mention facts which are against their beliefs. Therefore, it is plausible that the narrative of Ghadir was reasoned to at the Saqifah but it has been omitted from the books by the trusted Sunni scholars!

3. Expressing the narrative of Ghadir, contrary to the philosophy of the formation of the Saqifah gathering

Considering what was said about those present in Medina at the time of the Holy Prophet’s departure and the participants at the Saqifah, as well as the motivation of the Helpers for this gathering, it’s revealed that the Helpers and the Emigrants had gathered at the Saqifah so that a person from their own tribes would become the Caliph; therefore, expressing the event of Ghadir was against the philosophy of their presence at the Saqifah and would question the philosophy of their gathering. If they intended to express the event of Ghadir, they would have never gathered at the Saqifah at the first place.

4. None of Imam Ali’s ᴾᴮᵁᴴ companions were present at the Saqifah

Neither Imam Ali ᴾᴮᵁᴴ nor one of Bani Hashim and those who were considered as special companions of the Imam were present at the Saqifah; but they were either in Usama’s army or helping Imam Ali ᴾᴮᵁᴴ with burial of Prophet Muhammad ᴾᴮᵁᴴ. How could they reason to the narrative of Ghadir when none of them were present?

Reasoning to the narrative of Ghadir after the Safiqah

According to some narratives, many people who were at the Saqifah said that they would not pledge allegiance to anyone other than Imam Ali ᴾᴮᵁᴴ, but what Umar did presented them with a fait accompli.

“When Prophet Muhammad ᴾᴮᵁᴴ passed away, the Helpers gathered at the Saqifah of Bani Sa’dah to pledge allegiance to Sa’d ibn Ibadah; Abu Bakr heard the news and went to them along with Umar and Abu Ubaidah ibn al-Jarrah and said: what is going on? They replied: one of us and one of you should become the ruler. Abu Bakr said: one of us should be the ruler (Caliph) and one of you should be the minister. And then Abu Bakr said: I accept that one of these two Trustees of this nation, Umar and Abu Ubaydah, become the Caliph. Umar said: who may not accept the one whom the Prophet Muhammad ᴾᴮᵁᴴ has given priority to over other people as the Caliph? Umar pledged allegiance to him and so did the people. After that, the Helpers or a group of them said: we only pledge allegiance to Ali; and Ali and Bani Hashim and Zubayr and Talha refused to pledge allegiance. Zubayr said: I will not put my sword back in the sheath until the allegiance will be pledged to Ali. Umar said: take his sword and hit it to stone (to break it); then Umar went to forcibly take them to pledge allegiance.”

“… It has been narrated from Lady Fatimah ᴾᴮᵁᴴ: “Have you forgotten the words of Prophet Muhammad ᴾᴮᵁᴴ on the day of Ghadir Khumm that said: “Whomever I am the master, Ali is his master”? And also his words to Ali that said: “Your position to me is like the position of Aaron to Moses”…””

The cooperation of Imam Ali (PBUH) with the...