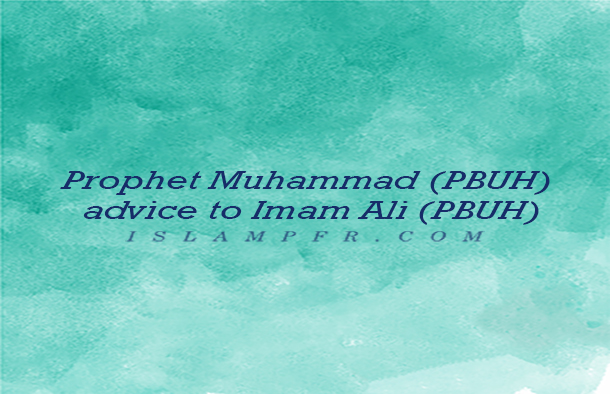 O Ali, no gravity is harder than ignorance, no wealth is more beneficial than wisdom, no loneliness and roving is more fearful than egoism and no request is better than consultation as well as no wise is as providence, no pride is as well-behaving & no pray is as though and idea.

O Ali, advice you to honesty, never tell lie, never do a treachery& has such fear from God that you can see him, devote your body & property for your religion & have good behavior & be away from bad characteristics.

O Ali, three actions are in goodness of behavior: be friend with your enemies, forgive people whom don’t forgive you & are cruel to you.

O Ali, if these three features aren’t in someone, he/she won’t be successful: The probity saves individuals disobeying from God. The knowledge saves unwise people from irrationality. The wisdom helps people to be friend.

O Ali: it has been said in Torah: four things are beside other for things:

Someone who starts the day with greedy undoubtedly has wrath to God & someone who complains from the sadness is complained from God & someone who see himself/herself poor in dealing with rich, has lost half of his/her religion & those who ridicule divine Ayah are from hell.

O Ali, three things perish & three things save: obeying ego, covetously& egoism will perish you. But, fairness in happiness & anger mode, fairness in wealth & gravity & fear from God in secret and open as you can see him, if you don’t see him; he sees you will save you.

O, Ali, if have proper & good behavior with your family, neighbors, friends & relatives, will go higher.

There are three characteristics for cruel: suppress his subordinates, disobey his boss & assist his cruel friends.

Wise man should travel only for; improving his life, being ready for judgment day, enjoying from lawful.

There are three signs for lazy people: shows weakness in doing affairs so that falls to guilt and retardation, neglect in affairs so that result in corruption & wastes time so that become guilty.

And there are three signs for hypocrite: if he talks, his words are lie, if he is trusted, he will betray & he will forgot his promise.