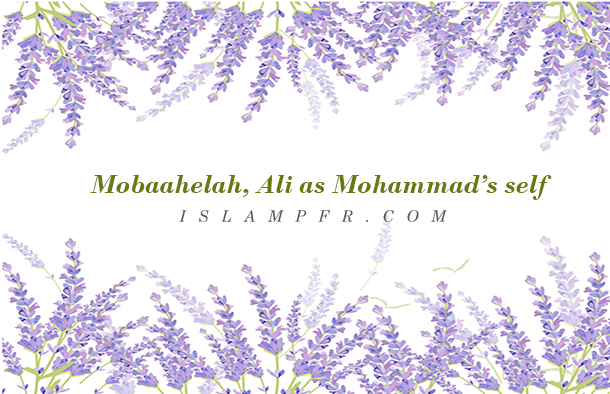 Mobaahelah, Ali as Mohammad’s self (PBUT)

A group of Christians -who, based on Jesus’ prophecies, were expecting the Promised Prophet and were responding to the invitation of Islam- traveled from Najraan -which was a place between Hejaaz and Yemen- to Medina. Verses 59&60 of Surah Aal-E-Emraan were sent down to the Prophet in response to their claim that Jesus was the son of God (see the article ”Adam and Jesus(PBUT)” in this site). Their bishop based on the signs of the
Promised Prophet as indicated in their religious documents, knew that
Mohammad (PBUH&HP) was the Promised one. On the way to Medina, the bishop had even confessed to his brother that Mohammad was certainly the one they were anticipating. Later after meeting the Prophet, the brother embraced Islam but the love of worldly attractions and positions kept the bishop from accepting Islam and announcing that which he knew in his heart.

After the Christians met the Prophet, and the bishop refused to submit, Allah sent the following verse down to the Prophet Mohammad (PBUH&HP):

…say! come and let us call Our Sons and Your Sons, and Our Ladies and Your Ladies, and Our own Selves and Your Own Selves, then let us both
earnestly call God, and place La’nat of Allah upon -ask Allah to withhold His Mercy and Compassion from- those who do not reveal the Truth.

Through this Qur’anic verse God commanded the Prophet to call the Christians to a Mobaahelah. Those Christians, based on their writings, knew that the Promised Prophet’s prayers would definitely be answered by God. In a chosen day, the Prophet Mohammad (PBUH&HP) asked the Christians, based on the aforesaid verse, to bring their selves, their women and their
sons to a specified location, while the people were present too. The
Christians did so and they were expecting that the Prophet would come
with a large number of soldiers to confront them. To their surprise,
the Prophet Mohammad (PBUH&HP) showed up with only 4 people on
his side. As indicated in the aforementioned Qur’anic verse -which is
called “The Mobaahelah verse”- the Prophet brought only Fatima
(PBUH) as the women; the only woman whom God and the Prophet
considered worthy to be the woman from the Prophet and be present in the manifestation of this Qur’anic verse, was Fatima. The Prophet brought Hassan and Hossain (PBUT) who
were very young, as his only sons and last but not least, the Prophet brought Ali (PBUH), as his own self (Sunni documents: Sahih Moslem, Sonan
Termadhi, …); God in this Qur’anic verse had requested both sides to
bring their selves, their women and their sons; clearly, the Prophet
Muhammad (PBUH&HP) was, once again, introducing Ali as his own
self, Hassan and Hossain as his only sons, and Fatima as the only lady from him. When Mohammad, Ali, Fatima, Hassan, Hossain (PBUT)arrived in
the indicated location they fell on their knees and started to pray.
Allah, in the aforesaid verse had commanded both sides to pray and He
actually was indicating that only the rightful ones’ prayers would be answered and the other side would be deprived of God’s Mercy. The Christians then, on the one hand realized that the Prophet was sure that his prayer would be answered and not the prayer of the other side, otherwise the Prophet would not have brought his loved ones to the scene of the Mobaahelah; on the other hand, when the Christians looked at those holy and heavenly faces and those hands raised up toward the sky, they felt the earth moving under their feet. They knew then, if those 5 kept on praying, God’s Mercy would surely be
kept away from them, forever. So, they begged Mohammad to stop and
the Prophet did so. This event proved the Divinely bestowed position and power of Mohammad, Ali, Fatima, Hassan and Hossain (PBUT) and their rightfulness to any one who have a fair and bright heart and mind. But
those who have dark hearts and minds, Qur’an not only guides them
not, but also adds to their darkness. (Qur’an, Surah Esra, Verse 82, …)

The Prophet also recited the famous “Tathir” verse on that same day
to repeatedly, introduce the Ahl-Ol-Bait and their exalted position.
In that verse, God clearly announces to every one that the
Ahl-Ol-Bait are purified, impeccable and infallible and they are the
chosen ones:

This is it and nothing but this, Allah has Willed to put away all that is not
pure, from you, The AHL-OL-BAIT, and make you immaculate and pure, in the most possible purified status.

O’ our beloved Mahdi! You are the last reminder of the Ahl-Ol-Bait (PBUT); you, just like your mother and fathers are an unlimited ocean of chastity; you are the gentle breeze of honesty; you are the fresh stream of limpidity; come! And teach us the celestial meaning of humanity … .