Home Articles Miracles of the Quran, the universe
Articles 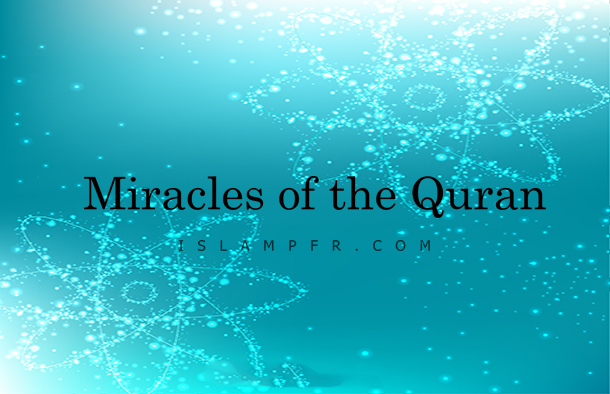 Miracles of the Quran

The matchless style of the Quran and wisdom in it, are definite evidence, it is the word of God. In addition the Quran has many miraculous attributes, proving that it is revelation from God. One of these facts is scientific issues that we have covered them in 20th century, but it is stated in Quran 1400 years ago. These facts could not have been ever known at the time the Quran revealed and this is more proving that the Quran is the word of God.

In the 7th century, when the Quran was revealed, Arab society had many superstitious, lack of the technology to examine the universe and nature. These Arabs believed in everything they were told by their past generation, for example they believed the earth is flat and mountains are on its both sides and the sky is like a roof above them, they thought mountains are the supports of sky (the roof). But God answered them in Quran: God is he who rose up the heavens without any support. (Surah Al-Rad, Verse 2)

Quran revealed at the time when people knew little about astronomy, Physics or Biology and Quran explain the creation of universe, the creation of human being, the structure of the atmosphere and the delicate balance that makes life on earth, possible.

Let’s now take a look at some of scientific truth revealed in the Quran.

The creation of the universe

The origin of the universe is described in Quran In the following verse:

He is the originator of the heaven and the earth. (Surah Al-Anaam, Verse 101)

The conclusion astrophysics reached today, is that the entire universe gathered with matter and time and they came to existence as a result of a great explosion that occurred in no time. This event is known as the big bang which produced entire universe about 15 billion years ago.

Before the big bang there was not such a thing as matter, not even time or energy. It is described in Modern physic as metaphysic. They proved there should be non material power to make this explosion.

Only Allah is the greatest power to create everything.

The expansion of the universe

In holy Quran which was revealed 14 centuries ago at the time when the science of astronomy was still primitive, the expansion of universe was described like this:

And it is we who have constructed the heaven with might, and verily, it is we who are steadily expanding it.   (Surah Al- Dhariat, verse 47)

The word heaven stated in this verse, is used many times in Quran with the meaning of space and universe. Here again the word is used in this meaning, in other words in the Quran it is communicated that the universe expands, and it is a conclusion science reached today. Until 20th century only view was the universe has a constant nature. The research observation and calculations carried out by modern technology however, revealed that the universe, in fact, had a beginning and it constantly expands. This fact is proved by observation of scientist in 1999, by telescope. They found out galaxies were moving away each other, it means expanding of the universe. This fact was explained in Quran when such a fact like this, was yet unknown by anyone. This is because of the Quran is the word of God, the creator and the ruler of the entire universe.

Quran emphasize, each moves in a certain orbit.

It is he who created the night and the day, and the sun and the moon, they swim along each in an orbit.

It is mention in another verse too, that the sun is not static but moves in a certain orbit:

And the sun runs to its resting place. That is the decree of the almighty, the all-knowing.

These facts communicated in the Quran have been discovered by astronomic observation in our age. According to the calculation of the experts of astronomy, the sun is traveling at the norm speed of 720,000 km in hour, in a particular orbit. This means that the sun travels roughly 17,280,000 km a day. Along with the sun, planets and satellites within the gravitation of the system of the sun, also travel the same distance, in addition, all stars in the universe are in a similar planed motion.

The entire universe is full of path and orbits such as this one, is described in Quran as follows:

By the sky full of paths and orbits.   (Surah Al- Dhariat, verse 7)

There are about 200,000,000,000 galaxies in the universe consisting of 200,000,000,000 stars in each, most of these stars have planets and most of those planets have satellite. All of these heavenly bodies move in an orbit. From millions of years each has been swimming alone in its own orbit in perfect harmony. Moreover many other things move through orbits like shooting stars. Not only the planets but also galaxies move in a norm speed and during this traveling no planet or space body collide each other. Indeed, it is observed some galaxies pass through each other, none of them touching each other.

Surely at the time Quran was revealed, human kind did not have any observation technologies, no modern knowledge of physics and astronomy. But it is mentioned in Quran because Quran is the words of God.

In the Quran, God calls our attention to a very interesting attribute of the sky:

We made the sky a preserved and protected roof yet still they turn away from our signs.   (Surah Al- Anbya, verse 32)

This attribute of the sky has been proved by scientific research in 20th century. The atmosphere surrounding the earth has different kind of functions. For example it prevents meteorites which approach to the earth, clash with the earth. In addition, the atmosphere prevents the light rays coming from the space that are harmful to living being. Interestingly, the atmosphere let’s only harmless and useful rays, visible light near ultra violet and radio waves pass through. All of this radiation is vital for life. Near ultra violet rays, are so important for photosynthesis of plants and for survival all living beings. The most part of ultraviolet which is harmful return back to the space by the ozone layer and a limit part of that which is useful reach to the earth. The protective function of the atmosphere is not end here; the atmosphere also protects the earth from the freezing cold of space which is about -270 degrees centigrade. It is not only the atmosphere that protects the earth from harmful attacks, in addition, to the atmosphere; there is a magnetic layer like a shield to protect the earth from harmful radiation. This radiation which constantly comes by the sun and other stars is deadly to living things. If this magnetic shield did not exist, the massive energy from the sun would destroy life on earth. The energy of the one of the flashes of the sun’s surface is equal to 100, 000,000,000 atomic bombs similar one that dropped in Hiroshima. Surely a perfect system work high above the earth that scientist only know about it recently but 14 centuries ago we informed in the Quran about the atmosphere function as a protective shield.

The following verse refers to the returning function of the sky:

By heaven with its cyclical systems. (Surah Al Tariq, verse 11)

This word interpreted the cyclical in Quran translations also has meanings of sending back or returning. As known, the atmosphere surrounding the earth consist of many layers, each layer serves an important purpose for life benefit. Researches revealed that these layers have the function of turning the materials and thing which suppose to back into the space or back down to earth, let’s get more by some examples.

Troposphere, 13 to 15 km above the earth, sends the vapor rising from the earth surface, back to the earth that it causes rain.

The ozone layer which is around 25 km, reflect harmful radiation and ultra violet light coming from the space and turns both back into space.

The ionosphere, reflects radio waves broadcast from the earth back down to different parts of the world just like a passive communication satellite and that is why radio waves and TV broadcasting is possible everywhere on the earth

This fact of layers which was discovered centuries ago in the Quran, demonstrates the Quran is the world of God.

The layers of the atmosphere

Another fact about the sky is that, it has 7 layers:

It is he who created everything on the earth for you and then directed his attention up to heaven and arranged it into seven regular heavens. He has knowledge of all things.   (Surah Al- Baqarah, verse 29)

Then he turned to heaven when it was smoke (11). In two days he determined them as seven heavens and revealed in every heaven, its own mandate (12). (Surah Fussilat, 11-12)

The word heaven which appears in many verses in Quran refers to the sky as well as the entire universe.

Here it means the sky or the atmosphere that is made of seven layers. Indeed today it is known atmosphere consist on seven layers that are above each other, exactly as it is described in Quran. According to the researches atmosphere consist of seven layers. The layers differ in such physical properties as pressure and the types of gasses. These layers are named Troposphere, Ozone, stratosphere, Mesosphere, Thermosphere, Ionosphere, and Exosphere. It is miraculous that these facts which are discovered by modern technology, are told in Quran thousand 14 centuries ago.