Home Articles Miracles of the Quran, The victory of Byzantium
Articles 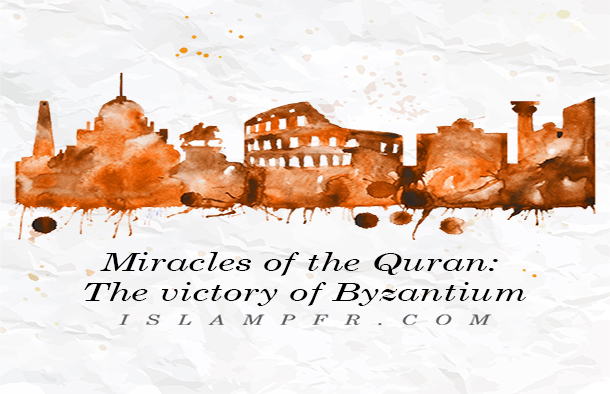 Miracles of the Quran: The victory of Byzantium

Another piece of news that the Quran gives about the future, is found in the first verse of Surah Ar-Rome. In these verses it is stated that the Byzantium Empire had met with a great defeat , but that it would soon gain victory.

The Romans have been defeated in the land nearby, but after their defeat they will themselves be victorious in a few years’ time. The affair is God’s from beginning to the end. ( Surah Ar-Rum, 2-4 )

These verses were revealed around 620 CA almost 7 years after the severe defeat of Christian Byzantium at the hands of Persians, when the Byzantium loosed grossly. Yet it was related in the verses that Byzantium would shortly be victorious. In fact Byzantium had been suffered such heavy loses that it seemed impossible to maintain the existence let alone be victorious again. Not only the Persians but also Avars, Slavs, and Lombards posed serious threats to the Byzantium Empire. Heraclius had ordered the gold and silver in churches to be melted and turn into money in order to meet the expenses of the army.

Many governors had revolted against Emperor Heraclius and the Empire was on the point of collapse. Many important parts of Byzantium Empire were invaded by idolater Persians. In short everyone was expecting the Byzantium Empire to be destroyed. But right at that moment the first verses of the Surah of Rum were revealed announcing the Byzantium would gain triumph in a few year’s time. Around 7 years after the revelation of the first verses of Surah Al-Rum in December 627 CA a decisive battle between Byzantium and Persians Empire happened in Nynava. And this time the Byzantium army surprisingly defeated the Persian army. A few months later the Persians returned the territory which had taken from them. At the end the victory of the Romans proclaimed by God in the Quran miraculously occurred.

Another miracle revealed in these verses is the announcement of the geographical fact that did not discovered by anyone in that period. In the third verse of Rum we are informed that the romans had been feted in lowest region of the earth. This expressionادنی ال in Arabic is interpreted as a nearby place in many translations. Yet this is not the literal meaning of the original statement. But a figurative interpretation of it. The word ادنی in Arabic is derived from the word دنی which means low and … which means world. Therefore the expression means the lowest place in the earth. Most interestingly crucial stages of the war fought between the Byzantium Empire and the Persians, when the Byzantium was defeated in most gross, had really taken place at the lowest point on earth. This specified region is the basin of the Dead Sea which is situated at the intersection point of the land belonging to Syria, Palestine, and Jordan. The Dead Sea lying at 395 meters below sea level is the lowest region of the earth. This means that the Byzantium would defeated at the lowest part of the world just as stated in the verse. The most interesting point lies in the fact the attitude of the Dead Sea could only be measured modern measurement techniques. Before that is was impossible for anyone to know that it was the lowest region on the surface of the earth. Yet this region was stated to be the lowest point on the earth in the Quran. Hence this provides another evidence that the Quran is divine revelation.

Apart from the miraculous characteristic of Quran which we had looked into it so far, it also has a mathematical miracle. An example of this is the numbers of repetitions of some words in the Quran. Some related words are surprisingly repeated the same number of times. Below are such words and the numbers of their repetitions in the Quran. The word day is repeated 365 times in singular form while is plural and double forms days together are repeated 30 times, the number of the repetitions of the word moon is 12. The word punishment is repeated 117 times while the expression forgiveness which is the one the basic principles of the Quran is repeated exactly twices many times. The number of times the word world and hereafter are repeated is also the same, 115. The state of the seven heavens is repeated 7 times. The creation of the heavens is also repeated 7 times. The word faith, Imam, without genitive is repeated 25 times throughout the Quran. As is also the word infidelity or covering over the truth. The word zakat is repeated 32 times while the number of the repetition of the word blessing is also 32. The expression the truly virtues is used 6 times. But libertine is used half as much i.e. 3 times. Human beings is used 65 times the sum of the number of mentions of the stages of man’s creation is the same.