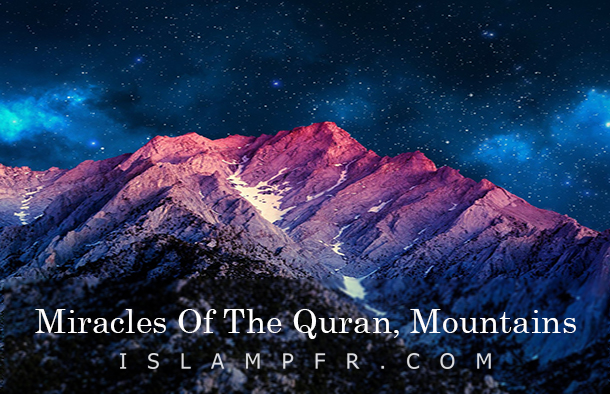 The function of mountains

The Quran draws attention to a very important geological function of mountains.

We placed firmly embedded mountains on the Earth, so that it would not move under them. (Surah Al-Anbyia 31)

As noticed it is stated in the verse that the mountains has the function of preventing shocks on the Earth. This fact was not known by any one at the time the Quran was revealed. It was in fact brought to light recently as a result of the finding of modern geology. According to these findings mountains emerge as a result of the movement and collision of massive plates forming the earth crust. When two plates collide, the stronger one slides under the other. The one on top bends and forms the heights the mountains. The layer beneath proceeds under the ground and makes a deep extension downward. That means that mountains have a portion stretching downwards as large as the visible portion on the earth. In a scientific text the structure of mountains is described this follows. Where continent are thicker as in mountain ranges the crust sinks deeper in to the mountain. In a verse this role of the mountains is pointed out through comparison with pegs. Have we not made the earth as a bed and the mountain is pegs? Mountains, in other words, clings the plates in the earth crust together by extending above and beneath the earth surface at the conjunction points of these plates. In this way they fix the earth crust and prevent it from drifting over the magnet strengths or among its plates. Briefly, we may liken the mountains to nails that keep wood pieces together. This fixing function of the mountains is defined in scientific literature with the term “Isostasy”.

This vital role of mountains that was discovered by the modern geology and science research was revealed in the Quran centuries ago as an example of supreme wisdom in God’s creation:

The movement of mountains

In one of the verses were informed that the mountains are not as motionless as they seem that they are in constant motion. You will see the mountains you reckon to be solid, going pass like clouds. Such as the artistry of God who disposes of all things in perfect order, surely he is aware of what you do. This motion of the mountains is caused by the movement of the earth crust that they are located on. The earth crust sort of float over the melted layer which is denser. It was the beginning of the twentieth century when for the first time in history a German scientist by the name Alfred Wegener proposed that the continents of the earth had been attached together at the initial phases of the world, but then drifted in different directions and thus separated their moves from each other. Geologists understood that Wegener was right, only in 1999, fifty years after his death.

Discovered as a result of the geological research carried out at the beginning of the twenty century this movement of the earth crust is explained by scientists as follows:

There is a very important point to be stated here. God has referred to the motion of the mountains as a drifting action in the verse. Today modern scientists also use the term continental drift for this motion. Unquestionably it is one of the miracles of the Quran that the scientific facts which has been recently discovered by science.