Home Articles Miracles of the Quran, the baby
Articles 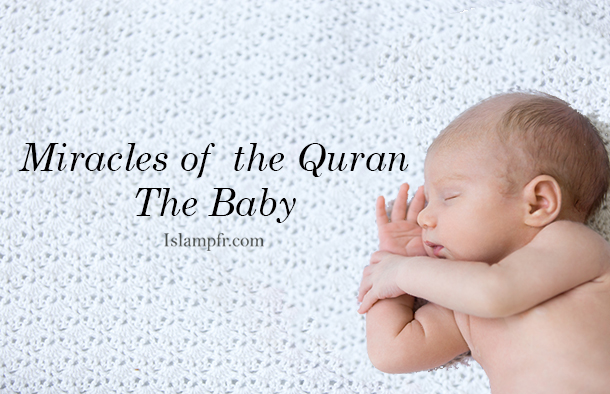 Miracles of the Quran: The Baby

The sex of a baby

Until fairly recently it was thought that a baby sex was determined by the mother’s cells. Or at least it was believed that the sex was determined the male and female cells together. But we are given of a different kind of information in the Quran where it is stated that masculinity or femininity is created out of the sperm poured forth in to the womb.

The improving disciplines of genetics and molecular biology have scientifically validated the accuracy of this information are given by the Quran. This is now understood that the sex is determined by sperm cells coming from the male and that the female has no role in the process. Chromosomes are the main elements in determining sex. Two of the 46 chromosomes that the structure of the human beings are identified as the sex chromosome. These two chromosomes are called XY in males and XX in females because the shapes of the chromosomes resembles these letters. The Y chromosome carries the genes that code for masculinity, while the X chromosome carries the gene that code for the femininity. Formation of a new human being begins with the cross combination of one of these chromosomes which exist in male and female in pairs. In females both components of the sex cells which divides in to two, carry X chromosomes. The sex cell of male, on the other hand, produces two kinds of sperm. One contain X chromosomes, and the other Y chromosomes. If an X chromosome from the female unites with the sperm contains an X chromosomes, then the baby is female. If it unites with the sperm contains a Y chromosome, the baby is male. In other words, a baby sex is determined by which chromosome from the male unites with the female ovum.

None of this was known until the discovery of the genetics in 20th century. Indeed in many cultures it was believed that the baby sex was determine by female body. That was why women were blamed when they gave birth to girls.

However 13 centuries before human beings were discovered the Quran revealed information that denies the superstitious and referred to the original sex being not with women but with the semen coming from men. If we keep on examine in facts announced to us in the Quran about the formation of people, we again encounter some very important scientific miracles. When the sperm s of the male unite with the ovum of the female, the essence of the baby to be boned is formed. This single cell known as the zygote in biology, will instantly start to reproduce by diving and eventually become a piece of flesh. The zygote, however, does not spend this developmental period in a void. It clings to the uterus just like roots that are firmly fixed to the earth. Through this bound the zygote can attain a substance essential to its development from the mother’s body. Here at this point a very significant miracle of the Quran was revealed. While referring to the zygote developing in mother’s womb, God uses the word Alag in the Quran.

Recite: In the name of your Lord. Who created man from alaq. Recite : and your lord is the Most Generous. ( Surah Al-Alaq, 1-3)

The meaning of the word of alaq in Arabic is : a thing that is clings to some place. The word is literally used to describe leeches that cling to a body to suck blood. Certainly it is not a coincidence that such an appropriate word is used for the zygote, developing in the mother womb. This prove once again that the Quran is a revelation of God, Lord of all the worlds.

While it is told in the Quran that it is easy for God to bring man to life after dead. The fingerprint of man particularly emphasized .

The emphasis on the fingerprints has a very especial meaning. This is because everyone’s fingerprints is unique to himself. Every person who is alive or who is ever lived in this world has a set of unique fingerprints. That is why fingerprints are accepted as a very important identity card exclusive to its owner and use for this purpose all over the world. But what is important is that this feature of the fingerprints was only discovered in the late 19th century. Before then people regarded fingerprints as ordinary codes without any specific important or meaning. However, in the Quran God, points to the fingerprints which did not the tract anyone attention of at that time. And calls our attention to their importance. And important that could only be understood in our age.

The wrapping of muscles over the bones

Another important aspect of the information mentioned in the verses of the Quran, is the development of stages of a human in mother’s womb. It is stated in the verses that in the mother womb first the bones develop and then the muscles form which wrap around these bones.

(We) then formed the drop into a clot and formed the clot into a lump and forms the lump into bones and clothed the bones in flesh; and then brought him into being as another creature. Blessed be God, the best of creators!

Embryology is a branch of science that studies the development of embryos in the mother’s womb. Until very recently embryologists assumed that the bones and muscles in the embryo developed at the same time. For this reason for a long time some people claimed that these verses were incomplete with science. Yet advanced microscopic research conducted by virtue of a new technological developments, has revealed the revelation of the Quran word by word correct. These examinations by microscopic level showed that the development in side of the mother’s womb take place in just the way that is described in the verses. First the coltish tissue of the embryo ossifies. Then muscles cells that are selected from among the tissue around the bones come together and wrap around these bones. This event is described in the scientific publication in the following word:

In short man’s development stages as they are described in the Quran are in perfect harmony with the finding of modern embryology .

Three stages of the baby in the womb

In the Quran it is related that man is created in a three stage process in their mother’s womb:

He creates you stage buy stage in your mother’s womb in a threefold darkness. That is God, your Lord. Sovereignty is His. There is no God but Him. So what has made you deviate?

As will be understood, it is pointed out in this verse that the human being is created in their mother’s womb in three distinct stages. Indeed modern biology has revealed that the baby embryological development takes place in three distinct regions in their mother’s womb. Today, in all embryological text books studied in the faculties of medicine this subject is taken as element of basic knowledge. For instance, in basic human embryology a fundamental reference text in the field of embryology this fact is stated as follow:

The life in the uterus has three stages: pre-embryonic , first two and a half weeks, embryonic, until the end of the eighth week, and fetal from the eighth week to latter. These stages refer to the developmental stages of a baby. Information under development in the mother’s womb became available only of the observations done with the modern devices. Yet, just like many other scientific facts these pieces of information are imparted in the verses of the Quran in a miraculous way.

Another miraculous aspect of the Quran is that it revealed beforehand a number of important events that would have occurred in the future. The 27th verse of Surah Al-Fath, for example, gave the believers glad tidings that they would conquer the Mecca, which was under the occupation of pagans.

God had confirmed his messenger’s vision within the truth: “You will enter the Masjid-al-haram in safety. God willing, shaving your heads and cutting your hair without any fear.” He knew what you did not know and ordained. In place of this, an imminent victory. (Surah Al-Fath, 27 )

In close consideration the verse is seeing to a not yet another victory that would take place before the victory of the Mecca. Indeed as stated in the verse the believers first conquered the Khyber fortress, which was under the control of Jews and then entered mecca.