Home Articles The miracle of colors in Quran –part 1
Articles 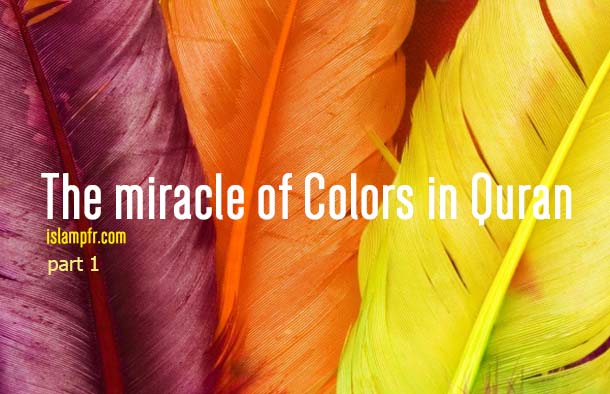 The colors are one of the wonderful subjects presented in the Holy Quran. In addition to the usage of general words about colors as لون-lawn- الوان-alwan- صبغه- sibghah ( all of which refer to colors in general), it particularly names some of the colors like yellow, green, blue, red, white and black and it also suggests the color of God as the best color.

The study of the word sibghah –صبغه– in the Holy Quran

This word is used twice in a verse. (We take our) color from Allah, and who is better than Allah at coloring. We are His worshippers. (2: 138). The author of Lisan al-Arab adds: “The color of God -sibghata Allah- means the religion of God and the Godly nature.” And the word “Sabgh” means to immerse into a fluid like water and also to change. (Ibn Manzur, Muhammad ibn Mukarram, Lisan al-Arab, vol. 8, pp. 437 438).

Imam al-Sadiq (PBUH) said: “Follow the religion –sibghah- of God”, which means: “Follow Islam that is necessary for the Godly nature.” (Tabarsi, Fazl ibn al-Hasan, Mjmalbyan, vol. 2, p. 79) In the Qur’anic exegesis, sibgha is also defined as color, unity, greatness, purity, righteousness, justice and fairness, brotherhood and equality, sincerity and at last as the color of colorlessness and the elimination of all colors. (Makarem Shirazi, Naser, Nemounah, Vol.1, p. 473).

It’s been common among the Christians to baptize a newborn baby and sometimes they used to add a special kind of yellow spice to the water and believed that to be baptized by this special colored water, would purify the baby of the original sin inherited from Adam. (Tabatabai, the same, J10, p. 475).).

Inevitably during the lifetime, man should select a color and the best color is that which is low-cost, impressive, pleasant, lasting and obtainable; that is, it should be found at any time and place and the color of God is so. It has the same color as human nature and logic and it is impressive to the saints of God (those who believe in the Oneness of God and fear God much) and the buyer of it is God and the cost of it is the heaven. So from among the colors the best and the most beautiful is the color of God.

However one cannot take the color of unity, brotherhood and submission (to God) unless he relinquishes all the colors of whims or lusts, races and tribes (the same P.418).

It has been the Holy Quran that proposed for the first time the idea of a spiritual color beside and beyond all the tangible and material colors. And that is actually the color of colorlessness. This is one of the secrets and wonders of the Holy Quran. However it cannot be called a scientific wonder since it is not considered a scientific theory in the experimental sciences in general.

Studies at Louisiana and Purdue Universities in the United States show that yellow expresses happiness and joy and that is what the Holy Quran said fifteen centuries ago: “A little rich yellow that makes the audience joyful”(2:69). Yellow stimulates the thought. It affects the shortcomings of soul and mind and it soothes some psychological states. That’s why yellow has been recommended for the libraries and reading rooms. It is a warm color and the psychological experiments proved that yellow is joyful a lot.

Yellow helps the metabolism of the body and since it reflects a lot of light it can be seen much sooner than other colors so it is used to attract attention more than other colors. According to Avicenna, the Iranian physician, in his book “The Canon of Medicine” yellow is used to soothe pain in color therapy (Pauline Wales, p.15).

It is also used to arouse the mind. It increases one’s energy. Living in a yellow space activates people, (The yellow rays of the sun people get ready to begin their daily activities).

In mental hospitals, they treat the isolated and inactive patients by putting them in a well-lit and yellow setting. (Ayatullah, the same, Q 6, No. 21, p. 3). A monotone yellow is annoying but a variable one is delightful. Yellow causes insomnia, excitement, anxiety and mental agitation. Yellow is the warmest color in the spectrum of the colors of the sun.

Golden, that is a mixture of yellow and orange, is warm and glittery and is connected with mysticism, theology, and holiness, such as the Domes of Imams’ Shrines that are gilded. This color is used in treating depression. The AnGeoPacific medicine claims that golden increases the blood circulation and body temperature and also activates the neurotic system (Pauline Wales, p.56). Most scholars in colorimetry believe that yellow is pleasant and delightful. Yellow is used five times in the Holy Quran in terms of safar, safra, mosafar in the verses bellow: 1. 2: 69/ 2. 30:51/ 3. 39:21/ 4. 57:20/ 5. 77:33.

In general, yellow is sometimes used in the Holy Quran as a delightful and vital color and sometimes it shows melancholy, death and destruction. The reason of this is possibly due to the diversity of the spectrum of the colors, for instance the intense golden yellow, light yellow, brownish yellow and etc. Each of which has got a different effect. When yellow turns into brownish, like leaves in autumn, they lose their delightful influences.

The Holy Quran focus on this color in some verses due to the psychological effects of yellow. About the yellow cow of Bani-Israel (the sons of Israel), God directly point out the gladdening effect of yellow.

“Ask your God to tell us how the color of that (the cow) must be?” (Moses said) “Actually it is an entirely yellow cow that makes the watchers delighted”. (2:62)

Ibn-al-Abbas has been quoted that “شدیدة الصفرة” means an intense yellow. In interpreting this verse, Allameh Tabatabaei says: “It is a pure intense yellow”. It should be noticed that in this verse the color yellow is preceded by the adjective – فاقع – which shows the intensity of the color and it is more used with the colors red and yellow. So it emphasizes on the intensity of yellow like golden which is a kind of intense yellow. Golden is an attractive and delightful kind of yellow and it symbolizes the Hereafter and Faith. According to this verse a general rule can be established about colors; that is, colors have got positive and negative effects on people’s spirits, for instance yellow causes happiness and delight whereas black causes grief and sorrow.

It can possibly be said that, this verse indicates psychological effects of colors. (Professor Rezaei talks about the probability of this statement since it is possible that the part “that makes the watchers delighted” may refers to the cow and not the color).

However according to the part “لونها تسرّالناظرین” it is clear that the delightful effect is due to the color of the cow (yellow) and not the cow itself; moreover it is not said “to make people delighted” but the watchers and what attracts the attention of the watchers at the first sight is the color.

Therefore the Holy Quran has mentioned the delightful effect of yellow in this verse fourteen centuries ago and stated a general rule about colors and demonstrated a part of the scientific dimensions of the Holy Quran. And that is what the scientists realized during the recent centuries whereas it has been agreed upon among the most of the Quranic interpreters all through the history of Islam.

After the holy Quran the scholars of psychology clearly realized about this feature of yellow and other colors. The delightful effects of yellow are also highlighted in the sayings of our Imams. Imam Sadiq (PBUH) said: “As long as someone is wearing yellow shoes, he will feel happy and glad.” And Imam Ali (PBUH) also said: “Whoever wears yellow shoes feels less depressed.” Imam Sadiq (PBUH) in another Hadith said: “Use yellow shoes because it has three features; it brightens eyes, increases sexual power (for married couples) and reduces sadness.” Imam Sadiq (PBUH) has referred to the stimulating nature of yellow.

The verse directly indicates the delightfulness of  dark yellow. And it seems that before the revelation of the Holy Quran this secret had not been uncovered. As a result, this can be considered a kind of scientific miracle about the colors. Another Quranic usage of this color is about the Hell. There, the fire in Hell is compared to the “yellow-wool camels”. “Surely it sends up sparks like palaces, As if they were tawny camels.” (Al-Mursalat 32, 33)

“Jamalah” means camels and “Sofr” is the plural form of yellow and it sometimes refers to dark colors; however here the former definition is more appropriate because the sparks of fire are reddish yellow. The common similarity between fire flares and the yellow-wool camels nay be because of the heat and warmness along with burnished shining of yellow lights. It refers to the shiny sparks and the heating aspect of fire; as the camels which were an important part of Arab lives in that time and the wool of which was used in cloth making.

The Holy Quran also points out the wilting of leaves and their becoming yellow in autumn. “Do you not see that Allah sends down water from the cloud, then makes it go along in the earth in springs, then brings forth therewith herbage of various colors, then it withers so that you see it becoming yellow, then He makes it a thing crushed and broken into pieces? Most surely there is a reminder in this for the men of understanding.” (39: 21)

In this verse, God has used yellow for the wilting and dying aspect which is directly in contrast with the usage of the joyful aspect of yellow in the verse 69 of Surah al-Baqarah; it seems that these differences in the interpretation are due to the diversity of yellow color spectrums.  Yellow is sometimes dark and intense while sometimes pale and light; sometimes golden and sometimes brownish all of which have got special effects; moreover, the psychology scholars have admitted it.

In the verses (77:32; 39:21) it is also referenced to another effect of yellow, heating and sparkling, and shining as well as that of wilting and destruction. Yellow by having opposite effects should have various degrees. Significant points can be achieved by pondering more on these verses.