Home Articles The miracle of colors in Quran –part 4
Articles 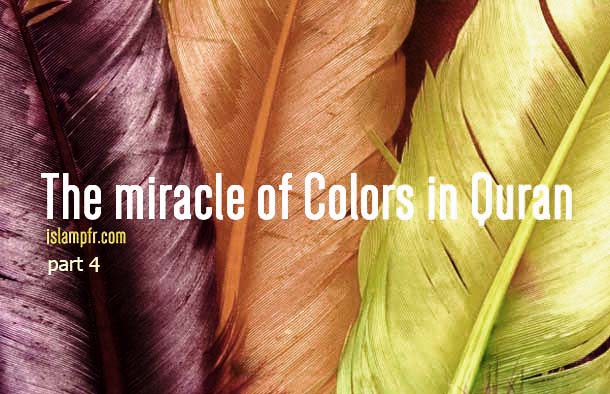 Some artists and scholars do not consider white and black as colors, because white is the main color of the Sun and when all of it is reflected on different objects and bounces back to us we see that object as white and if all the reflected light is absorbed by the object, it is seen as black and it is because no rays and colors reach our eyes’ seeing cells.  White represents purity, candor, sincerity, goodness, justice and truth and is sharp contrast with black. Good characteristics and positive features in addition to acceptable and desirable attributes are associated with this color. This color has been used explicitly eleven times in the Quran. Words meaning white (Ab’yazat, Tabayaz, Abyadth, Bayza and Bayz) are used four times in contrast with black.

Ranging from a bride’s dress to Ihram clothes and shrouds are all white to represent happiness, purity and serenity. Human nature is inclined to purity and white is the best symbol for it. White is a symbol for cleanliness and innocence, that’s why the Women in Paradise are called Houri which in sense the word means whiteness (Ibn Manzur, Lisan al-Arab, vol.4, p.265).

Islam a religion which is founded on the basis of human nature, cleanliness and purity, emphasizes on wearing white clothes and introduces white as the best color. Most of the grand Prophet’s clothes were white and he would say: “Dress your living dependents in white and dress your dead ones in  white shrouds.” It is also recommended to wear a white dress in one’s prayer and wearing black is abomination (Majlesi, Mohammad Bagher, Helyatol Muttaqin, p. 174).

Black versus white. Cynicism, violence, obstinacy, darkness, sin, Satan, death, mourning, ignorance and misery are evident in black color (Luther, Color Psychology, p.97, quoted from Mahmoudi). Another feature of black lies in its dignified solemnity and this is observable in the greatness of the dignity of the black covering around Kabbah, ladies’ chador and the cloak of the religious Ulema (ibid).

In this verse white and black are symbols of faith and bliss and of ignorance, cruelty and infidelity, respectively. The Quran in order to express the happiness of the believers depicts white faces and black faces to express the misery of the unbelievers and this is because of the special attributes of the two colors. White refers to the happiness of the believers and black refers to the passivity, embarrassment and shame of the disbelievers (Tabatabaei, Mohammad, Al-Mizan fi Tafsir al-Qur’an, vol. 3, p. 414).

As Allamah Tabatabai said, white and black faces are ironic and are not principal colors thus scientifically speaking they are not regarded as the scientific miracle verses of the Quran, although God considers the psychological effects of these colors and the application of these colors are also according to their psychological aspects. White is the color of Houris and drinks. As it was mentioned “Houri” means white. “Round will be passed to them a cup from a clear-flowing fountain, crystal-white, of a taste delicious to those who drink (thereof)” (37:45-6).

This drink is a great pleasure for  the person who drinks it. White sap of camphor which has a beautiful and aromatic plant brings coolness to mind and it is not perhaps irrelevant to color white. “As to the righteous, they shall drink of a cup (of wine) mixed with kafur,” (76:5). “And (there will be) companions (Houris) with beautiful, big, and lustrous eyes, like unto pearls well-guarded” (56:22-3).

Paradisiacal women are called “Houris” women because they are pure and virgin (Ibn Manzur, Lisan al-Arab, vol. 4, p. 265). They have been described in this verse as shiny pearls in oysters who remain hidden and no one can reach them. White is one of the colors of paradise and represents beauty, health, and a pleasant color (Qara’ati, Tafsir-eh Noor, vol. 10, p. 30).

“Hur” is the plural of “Hura” and is used for someone whose pupil is so dark and the white area in her eye is so bright and the contrast of white and black is hidden in the word “Hur (Ayatollahi, ibid., p. 3). Colors in nature are divided into two groups: sad and joyous colors, dark colors are generally sad and light colors such as white are joyous and thus the Wise Lord colored paradise, the place for peace and happiness, mostly in green and white. In five verses of the Holy Quran, white and luminous hands of Moses (PBUH) are considered as signs of divine miracles (7: 108; 20: 22; 26:33; 27:12; 28: 32).

“Now draw thy hand close to thy side: it shall come forth white (and shining), without harm (or stain),- as another sign” (20:22). In three cases the word “White without harm” is used and in two other cases “White to all beholders” is used.  In some narrations we read that the hand of Moses (PBUH) shone as the sun, but these verses only mention that the white hand of Moses was extraordinary (Tabatabai, Almizan, vol. 8, following: 7: 108; Makarem Shirazi, Tafsir Nemooneh , vol. 6, p. 285).

Interpretations of colors by God depends on how and where they are applied in addition to their features and characteristics.In the Holy Quran, the face of people who did not like to have daughters is depicted to be black out of fury. “When the news is brought to one of them, of (the birth of) a female (child), his face darkens, and he is filled with inward grief!” (16:58).

Black symbolizes ignorance, and  going astray and this is well seen in this verse, and this is what psychologists say black is a sign of darkness, violence and sin (Luther, ibid., p. 97). Allah in verse 187 of Surah Al-Baqarah says that the white thread is a metaphor for the whiteness of the horizon when the morning comes, as if the white line in the horizon heralds the coming of the morning and puts the black line of the night behind. “And eat and drink, until the white thread of dawn appears to you distinct from its black thread; then complete your fast till the night appears” (2:187).

In this verse, the Quran introduces the first emitted rays of the sun as white. In nature, light colors such as white and yellow, cause psychological triggers and increase human activity. The Quran has used the white color while describing how Jacob felt for the absence of Joseph: “And he turned away from them, and said: “How great is my grief for Joseph!” and his eyes became white with sorrow, and he fell into silent melancholy” (12: 84).

By his eyes “becoming white” we mean that the pupil of his eyes became white, it means blindness and he lost his sight, he completely became blind (Tabatabai, Muhammad Hussein, al-Mizan fi Tafsir al-Quran, vol. 11, p 361). This is the only instance that white has been used as a negative connotation.

Psychologists consider black as an absolute condition of colorlessness which abolishes all eagerness, therefore in the Quran the faces of the residents of Hell is depicted in black in a way that no one pays attention to them. “Their faces will be turned black;” (39:60). (The Day of Judgment will be the time when people’s true feelings and secret natures will be revealed, hence those who had dark and black hearts as well as dark deeds will have these features manifested in their appearance by having black faces.( Makarem Shirazi, ibid., vol. 19, p. 517).