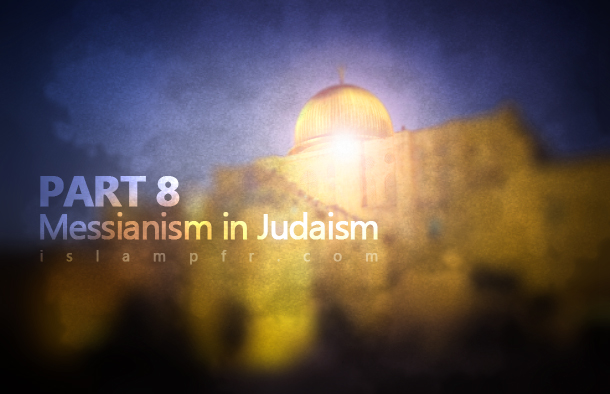 In the book of Prophet Zechariah, who is one of the major prophets for the children of Israel (Jewish tribe) and is subject to Torah, we can read about the promise of Mahdi’s return as below:

Behold, the day of the LORD cometh, and thy spoil shall be divided in the midst of thee.
For I will gather all nations against Jerusalem to battle; and the city shall be taken, and the houses rifled, and the women ravished; and half of the city shall go forth into captivity, and the residue of the people shall not be cut off from the city.
Then shall the LORD go forth, and fight against those nations, as when he fought in the day of battle.
And his feet shall stand in that day upon the mount of Olives, which is before Jerusalem on the east, and the mount of Olives shall cleave in the midst thereof toward the east and toward the west, … But it shall be one day which shall be known to the LORD, …
And the LORD shall be king over all the earth: in that day shall there be one LORD, and his name one. (1)

Here, we should mention that in the bible, the word “God” is mostly used for Jesus (PBUH) and such use can be seen here too. It’s interesting that in these verses, which were quoted from Torah, location of Jesus’s descension, mentioning that day as “the day of god”, the fact that Islam will become a worldwide religion and the annihilation of the Zionist entity all match exactly with Islamic hadiths (quotations).

We should pay attention that according to the Holy Quran, the subject of these prophesies has happened once during the ruling of Nebuchadnezzar and will happen once again in “the holy day of the return”(the day that Mahdi (PBUH) will return), all according to Quran’s clear promises and the promises of Mahdi’s return. In that day, the first qibla (the location where all Muslims pray to) of Muslims will be freed from the occupation of Zionist Jews and the one and only god will be worshiped all over the world and all the people everywhere on earth will be united.

Anyhow, what is said about the fate of arrogant Jews in these verses exactly matches with Islamic quotations; because we understand from the quotations that Jews will be annihilated from the face of earth because of their revolt on earth and disobedience to god and not a single Jew will remain in Palestine.

In this book, we read about the return of Mahdi (PBUH) and the fate of the children of Israel and the globalization of Monotheism faith and that the divine decrees sent by god will be implemented in that time:

… And, thou son of man, thus saith the Lord GOD; Speak unto every feathered fowl, and to every beast of the field, Assemble yourselves, and come; gather yourselves on every side to my sacrifice that I do sacrifice for you, even a great sacrifice upon the mountains of Israel, that ye may eat flesh, and drink blood.
Ye shall eat the flesh of the mighty, and drink the blood of the princes of the earth, of rams, of lambs, and of goats, of bullocks, all of them fatlings of Bashan.
Thus ye shall be filled at my table with horses and chariots, with mighty men, and with all men of war, saith the Lord GOD.
And I will set my glory among the heathen, and all the heathen shall see my judgment that I have executed, and my hand that I have laid upon them.
So the house of Israel shall know that I am the LORD their God from that day and forward.
And the heathen shall know that the house of Israel went into captivity for their iniquity: because they trespassed against me. (2)

We should pay attention that by “son of man”, Jesus (PBUH) isn’t intended; but Mahdi (PBUH), because the word “son of man” is repeated in the New Testament more than eighty times but only thirty one of them is about Jesus (PBUH) and Jesus’s title is son of god in this book.