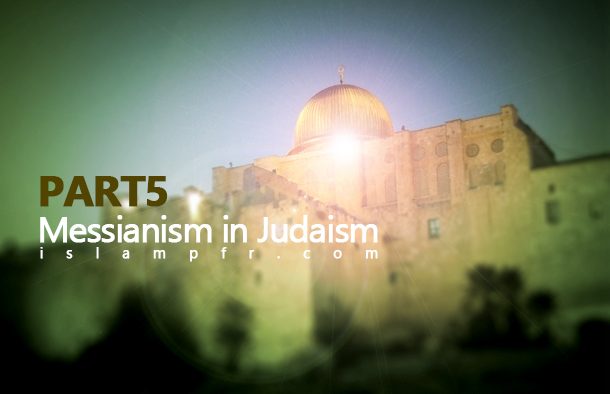 We read these in a chapter of the book of Isaiah:

And there shall come forth a rod out of the stem of Jesse (Jesse meaning “Strong” is the father of prophet David and the grandson of Ruth and it is well known that David (PBuh) is the son of Jesse), and a Branch shall grow out of his roots:
And the spirit of the LORD shall rest upon him, the spirit of wisdom and understanding, the spirit of counsel and might, the spirit of knowledge and of the fear of the LORD;
And shall make him of quick understanding in the fear of the LORD: and he shall not judge after the sight of his eyes, neither reprove after the hearing of his ears:
But with righteousness shall he judge the poor, and reprove with equity for the meek of the earth…

And righteousness shall be the girdle of his loins, and faithfulness the girdle of his reins.
The wolf also shall dwell with the lamb, and the leopard shall lie down with the kid; and the calf and the young lion and the fatling together; and a little child shall lead them.
And the cow and the bear shall feed; their young ones shall lie down together: and the lion shall eat straw like the ox.

And the sucking child shall play on the hole of the asp, and the weaned child shall put his hand on the cockatrice’ den.

They shall not hurt nor destroy in all my holy mountain: for the earth shall be full of the knowledge of the LORD, as the waters cover the sea. (1)

In the first verse, “And there shall come forth a rod out of the stem of Jesse”, “a rod” can be any of the four great divine leaders of mankind, David (PBUH) , Solomon (PBUH), Jesus (PBUH) and Mahdi (PBUH); but a complete observation of these verses shows that “a rod” isn’t any of these prophets; but all those promises are particularly mentioning Mahdi (PBUH); because David and Solomon (Peace be upon them) are both male descendants of Jesse, and Jesus son of Maryam (PBUH) is descended from one of Jesse’s daughters and Mahdi (PBUH) is also descended from his mother Narjis who is, the daughter of Joshua, the king of Rome, the descendant of David (PBUH) and her mother was a descendant of one of Jesus’ apostles (PBUH) whose generation will get to Simeon ,the successor of Jesus (PBUH), who is descended from one of Jesse’s daughters.

It is read in one of these verses: “And he shall not judge after the sight of his eyes, neither reprove after the hearing of his ears” this sentence mentions his absolute supremacy and his government which is ruled by justice and that he judges based on facts and realities and doesn’t need any witness, evidence and anyone’s testimony. We read in Islamic sayings that: “He will Judge as David and Muhammad (Peace be upon them) judged” this means that he will judge with his God-given knowledge.

In another verse of this gospel, it is read that during his ruling “The wolf also shall dwell with the lamb … They shall not hurt nor destroy in all my holy mountain” this sentence indicates that when the promised savior returns, Justice will spread so much that predators and preys will live together and beside each other and predators will lose their sense of predatory and won’t harm any creature; as Imam Hassan mojtaba (PBUH) says:

“In the kingship of Mahdi, predators will coexist and the earth will flourish its plants and the heaven will send down its graces and the hidden treasures of the earth will unfold for him and he will own everything between the west and the east. Anyone who sees those days and obeys his commands is blessed.”(2)