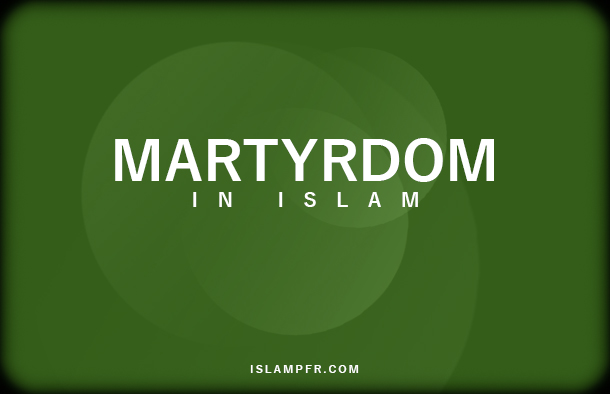 The words of the Holy Prophet (PBUH) are that “the most dignified way to die is to be martyred.”1

“Self-sacrifice is the best (form of) benevolence and the highest stage of faith.” 2

Martyrdom in Islam is a major concept. Anyone who fails to grasp the meaning of martyrdom, will also not understand the sublime message in Islam. “Islam” means submission to God, and it is in martyrdom that this submission to God finds its full expression. In Islamic Ideology, the greatest aim in the life’s struggle is to become victorious over the self. 3

The submission of the reasoning, feeling creation of God that is humankind, means that all human life belongs to God, and to God it returns. Man is to have no cares and desires other than being close to God, in complete servitude. So submission to God is the first duty we have as Muslims, as believers. We are not owned by our affection for the material world, our belongings, even our family; we are owned only by God, He is our pivot in life.

“Martyrdom is a divine gift to the chosen ones. The magnificence of this lofty position is proportional to the grandeur of the sacrosanct self-sacrifice which draws the martyr to the field of resistance and nourishes him with the sweetness of martyrdom.” 4

How do we achieve this submission, becoming victorious over the self?

If the greatest aim is to win the jihad over the self (the jihad over the self being the major jihad, ranked higher even the jihad in battle), how do we do that? This is where the understanding of submission, and the resulting acceptance of martyrdom, assists. If man understands that he has to free himself of all attachment to the material world and all that it entails, and turn to God, seeking only closeness to Him, then he loses all his worldly concerns. He is not affected by any misfortunes or sufferings in this world he may have to endure. He realizes that this life and all in it is but temporary.

A man thus free of worldly concerns, becomes cognizant that he receives everything from God, and that all will be returned to God. He no longer worries for the whims and cares of his own self. He finds true spiritual freedom and contentment in this understanding. “The foundation of contentment is complete reliance on Allah (God).” 2 He is victorious over his own self.

“A struggler overlooks everything belonging to him; above everything else he overlooks his own life and surrenders his entire existence to God-Almighty with absolute sincerity; he closes his eyes from wealth, power, position, wife, children, and relatives, thus, suddenly surrendering his soul to God-Almighty.” 3

Having reached this victory in the jihad over the self, what about martyrdom?

We might ask, now that man has overcome his self and won the “greatest jihad”, does he really need to continue towards martyrdom?

The greatest gift man can give to Allah in his submission is his life.

As man must die and return to God, and the death of the martyr is ranked higher than the death which befalls us not through our choice (illness, accident): “Verily the most honorable of deaths is martyrdom. By He in whose hand my soul is, one thousand strikes with the sword are indeed easier (for me) than dying on the bed.” 2  Martyrdom, then, is to be sought out in its own right, as it is the better death.

Does the position of man change having achieved martyrdom, compared to an “ordinary” death?

“But do not think of those that have been slain in God’s cause as dead. Nay, they are alive! With their sustainer have they their sustenance.” (Surah Al-Imran, 3: 169-172)

The understanding is that those martyred in their love for Allah gain more “closeness” to God, compared to those “dying on the bed.”

The culture of martyrdom in Islam, and Shia Islam, of celebrating the martyrs: the role models in the history of the Ahl al-Bayt

The celebration of martyrdom relates to reaching the highest rank as a person, sacrificing one’s life in God’s cause. It relates to choosing the “best death”, and also to the other struggle which a Muslim is required to undertake: the struggle to come to the aid of the oppressed.

“Continue on the path of fighting injustice which is an extension of the blood spilt in Karbala and continue combating oppression and injustice until the last drop of your blood.” (Hezbollah martyr Kaiser Zainuddin)

Amongst the martyrs of the family of the Holy Prophet (PBUH), the Ahl al-Bayt, following after Imam Ali (PBUH) and Imam Hassan (PBUH), Imam Husain (PBUH) is known as the king of martyrs, for it was he who sacrificed his life by bearing witness to Islam. “He cannot remain silent because he has a duty to fight against oppression.” 6 In the celebration of Imam Husain  (PBUH) in particular, we witness the centrality of martyrdom to the doctrine of submission to Allah. Husain (PBUH) has nothing to give, no wealth, no army, to combat the enemy, to stand up to the oppressors, the corruptors. He must give what he does have, his blood, his life, and with him the supporters and family who have come with him.

“Martyrdom is not a loss, it is a choice, a choice, whereby the warrior sacrifices himself on the temple of freedom and the altar of love and is victorious.” 6

Imam Husain’s (PBUH) martyrdom has passed this love for Allah in submission to Him, his rising against the oppressors with his own blood, down the generations of the Ahl al-Bayt, to our present time, and it is surely also with the hidden, twelfth Imam. The love for the Holy Prophet (PBUH) continues through the Ahl al-Bayt, and is reinvigorated through its martyrs. The present day martyrs of the battle field are just as much part of that love, and their love for Allah and the Ahl al-Bayt finds its highest expression in their self-sacrifice.

It is in Husain’s (PBUH) period that “dying” for a human being guarantees the “life” of a nation. His martyrdom is a means whereby faith can remain.” 6

Martyrdom is Islam’s history, and as more years, decades and centuries are added to its history, so too will martyrs.