Home Articles Why is marriage sacred in Islam?
Articles 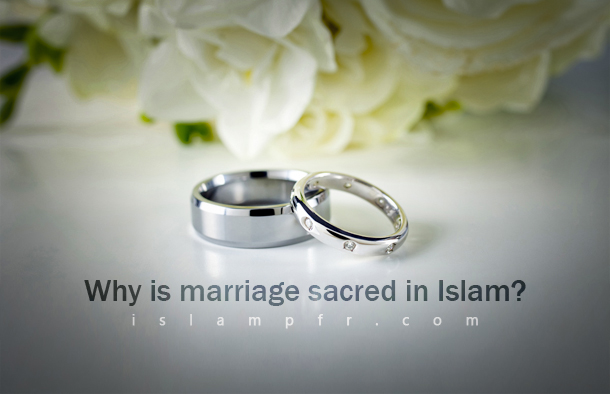 God has provided humans with many favors and set these favors clean and pure for them to employ. He has not prevent humans from everything that is pleasing. As He said in the Holy Quran (Al-A’raf:32):

“Say: Who hath forbidden the beautiful (gifts) of Allah, which He hath produced for His servants, and the things, clean and pure, (which He hath provided) for sustenance? Say: They are, for those who believe.”

So, there shouldn’t be a negative perspective to everything that pleases humans. Although eating pleases human (the desire for food), it is also necessary and sometimes even crucial to keep him safe and alive.

If Islam values marriage, it’s not just because of the sexual aspects of it; but also, it’s due to precious results beyond it.

Marriage is not just for satisfying sexual desire, it also has aspects of spirituality and mental and psychological health. Marriage is for reproduction of legitimate humans, choosing companion and partner and consultant in life. Marriage is a mean to accomplish spirituality and achieve ultimate goals. Marriage is for strengthening social bonds and contracts and these aspects should be noted, although satisfying sexual desire has divine reward if it is done for God’s sake and also makes men and women immune from sins or becoming associated with mental disorders due to sexual desire complexes.

In divine system and Quranic culture the main purpose of marriage is reaching mental peace and mind comfort, attaining the growth path, achieving human perfection and seeking nearness to Allah.

The Holy Quran says about the philosophy of marriage: “And among His Signs is this, that He created for you mates from among yourselves, that ye may dwell in tranquility with them.” (Ar-Rome: 21)

In this verse and Surah Al-A’raf, verse 189, Allah besides regarding the true essence of men and women as the sameand considering no superiority among them due to the origin of creation, expresses mental and psychological tranquility as the purpose of marriage and woman as the course of tranquility.

One of the marriage’s side purposes is to have children and to preserve the generations of humans.

3- The answer to the God-given human instinct:

Marriage is the Godly answer to human innate need; because Allah has created sexual desire in human.

One of the important purposes of marriage is to guard men and women’s chastity and to avoid various misdeeds, because marriage is the only natural way to satisfy sexual desire. Hence, Prophet Muhammad (PBUH) said: “Whoever gets married, he has completed half of his religion, so let him fear Allah with regard to the other half.” [Safinah Al-Behar, V. 1, P. 561]

From Islam’s perspective, not only celibacy is not considered as a virtue, but also it is known as an imperfection and a reason for loosing numerous spiritual blessings.

Imam Sadiq (PBUH) says: “A person came to my father. My father asked him: Do you have a wife? He said: No, I don’t. My father said: I would not prefer to have the world with all its riches while I spend a night without a wife. Two Rakats prayed by a married person is better than seventeen Rakats of a single person. Then he gave him seven Dinars and said: Get married with this money.” [Behar al-Anvar, V. 100, P. 217]

In other narration it is said that: A woman came to Imam Baqir (PBUH) and said I’ve lost my passion for marriage! Imam said: Why? She answered: I want to gain virtue in this way. Imam said: Change your mind. If there was a virtue in celibacy, Lady Fatimah (S.A) (the only offspring of Prophet Mohammed (PBUH)) would be more deserved than you.” [Safinah Al-Behar, V. 1, P. 561]

Islam severely criticizes celibacy. When Prophet Mohammed (PBUH) heard one of his companions has abandoned his wife, he was angered and said: “Allah did not send me for monasticism, rather He sent me with a simple and straight religion. I fast, pray and have intercourse with my wife. So whoever likes my inherent religion, then he should follow it and marriage is one of my traditions.” [Vasael-o- Shia, V. 14, P. 74]