The Character and virtues of Lady Zeinab (PBUH)- Part 1 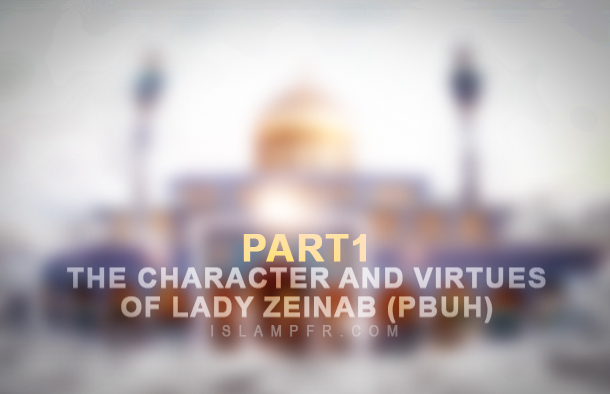 The Character and virtues of Lady Zeinab (PBUH)

Throughout history, many revolutions have occurred and many people have sacrificed themselves. Over time, they have been forgotten, but the Ashura movement has endured in the Muslims’ hearts along the passage of time.

Undoubtedly Lady Zeinab, as the Aqilah of Bani Hashim, is one of the influential characters in this great movement, who has an inimitable role in its eternity; she is one of the exceptional Ladies in the Islamic history and has been trained in the affectionate laps of Lady Fatimah (PBUH) and Imam Ali (PBUH), and has learnt the lessons of life.

So far, dozens of books and articles have been written about the bright life of this brave lady, and her life has been analyzed and admired.

In this article we are going to study and explain the character and virtues of this Lady.

The names and the titles of Lady Zeinab (PBUH)

Lady Zeinab (PBUH) is the first daughter of Imam Ali and Lady Fatimah (PBUH). The famous name of this great Lady is “Zeinab” which  means an “eye-catching tree” in word (1) and another meaning  derived from “Zain Ab”, which means a “father’s grace”. Truly Zeinab was the source of inimitable grace and decency for the school of Islam and her father’s creeds.

Lady Zeinab (PBUH) was born in Medina on the fifth of Jumada al-Awwal in the fifth or sixth year of Hegira. After her birth, Lady Fatimah (PBUH) gave the infant to Imam Ali (A.S) and said: “Choose her name.”  He said: “I won’t precede God’s Prophet in choosing a name for my daughter.” (2) At that time Prophet Muhammad (PBUH) was away on a trip. When he returned, Imam Ali (A.S) asked him her name. Prophet Muhammad (PBUH) said: “I shall not precede God in choosing a name for her.” Then Gabriel descended and said: “God has named her “Zeinab” (3), and has written it in a book well-guarded.” (4)

When God has selected the name of Lady Zeinab (PBUH), it shows that she has a great dignity in the sight of the Great God.

She is named as Umm Kulthum Kubra and Sedigheh Soghra. It is said that she had many  other names and titles such as Aqilat Bani Hashim (wise woman of Banu Hashim), ‘Alima Ghayr Mu’allama (the scholar without being taught), al-‘Arifa , al-Muwaththaqa (trustworthy), al-Fadila, al-Kamila (complete), ‘Abida Al ‘Ali (worshiper of the family of ‘Ali), al-Ma’suma al-Sughra, Aminat Allah, Na’ibat al-Zahra’ (representative of Zahra’), Na’ibat al-Hussein, ‘Aqilat al-Nisa’, Sharikat al-Shuhada’, al-Baligha, al-Fasiha, and Sharikat al- Hussein. (5)  Characteristically and by merit, Lady Zeinab (PBUH) truly deserves the aforementioned names and titles.

She married her cousin, “Abdullah Ibn Jafar” and the fruits of this marriage are five children. Two of them (Muhammad and Awn) accompanying Imam Hussein (PBUH) were martyred in Karbala. (6)

Eventually this great Lady passed away on fifteenth of Rajab in the year 62 after the Hegira while experiencing a lot of sorrow, grief and pain.

The character of Lady Zeinab (PBUH)

Psychologists believe that: factors such as heredity, upbringing, and the environment have basic roles in the formation of the foundation of humans’ character. (7)

These three factors had a special position in the life of Lady Zeinab (PBUH):

Prophet Muhammad (PBUH) has said about the children of Lady Fatimah:

The children of Fatimah (Hassan, Hussein, Zeinab, and Umm Kulthum), whom I am their lineal protector, have been created from the essence of my nature. (8)

So Lady Zeinab (PBUH) was born in such a family and has inherited the levels of perfection from these three great characters.

The upbringing of Lady Zeinab (A.S) in such a family led to this fact that this great character is considered as the third Lady of the Islam, after Lady Khadijah (PBUH) and Lady Fatimah (PBUH).

The dignity of Lady Zeinab (PBUH)

Lady Zeinab had a special dignity and position, to the extent that whenever she entered her father’s place, Imam Ali (PBUH) stood up and gave his place to her. She was a trustworthy person for her father.

She had a special dignity for Imam Hassan (A.S) and Imam Hussein (A.S) after his father. These two Imams respected her a lot. When problems and calamities happened for them, they tried to hide it so that Lady Zeinab (PBUH) would not notice it and become unhappy.

The virtues of Lady Zeinab (PBUH)

Lady Zeinab (PBUH) has many virtues. As it was said, she has some titles such as Aqilat Bani Hashim (wise woman of Banu Hashim), ‘Alima Ghayr Mu’allama (the scholar without being taught), etc. (12) and each of them testifies to the dignity of Lady Zeinab (PBUH).

In this section we mention some of her virtues.