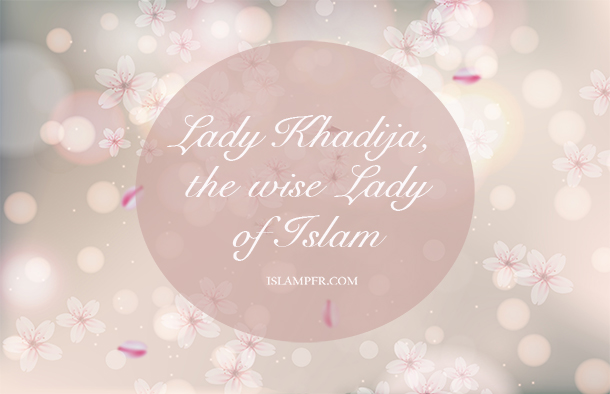 Lady Khadija, the distinguished and wise lady of Islam. Khadija-mother of believers and the faithful and devoted lady- was pass away after 65 year of her blessed life on tenths month of the tenths year of mission. The messenger of God –Mohammad- was buried her with his own hands in Hojun of Mecca. His grief to that tragedy was such high for the year which called that year to All in Sorrow. Hazrat Khadija- Peace Be Upon Her –personalities is so high and has different dimensions. Each dimensions can be leader of other Muslim women. The women could find the holiness and characteristics among her character.

All her family from father, mother, paternal and maternal grandparents were noble and they had dignity in Arab island. She was the outstanding example of perfection, genius, understanding and insights. There are few persons like her among man and women.

God wants that his prophecy lady and mother of eleven unique shrine star of Moral Virtues and our Imams be genius and unique in wisdom, courtesy, insight and understanding.

Yaeh! She was Khadija. T. and S. Nisa Quraish in Islam. The best women among Quraish. One of the fourth women who have higher position in heaven among all.

She was great blessing for prophet of God and she was mercy from the vast mercy of God. For the man who had a big and holy goals for the society and had great worked activities, the best comforter of heart and soul and guardian of stability and strength was a genius, wise, kind and sympathy   wife.

If a man began to fight the enemies and faced a lot of brutal attacks, ridicule, blame and persecution in his way outside the house and faced the timid, blooded, ignorant wife in the house who tries to force him to return from his target path and blame him and ask him to disclaim and visualization submission in front of the enemies and she became tired of her husband situations and does not tried to solve her husband’s problems, the man s hard ness and problems will be double.

Definitely the problems will be added for such a man because his wife did not try to solve his problems also make the problems more and more with her illogical behaviors like blaming and protesting.

The Islam prophet PBUH was agent from God to stand against superstitions, polytheism and idolatry, oppression and deprivation of poor population and poverty ,ignorance, corruption ,and prostitution and other vices and fight with arrogant , pagans and idolaters, fanatical , tribal chiefs and the heads of exploitation , with habits and false religious fanaticism.

The pagans stand against him with all their power. They torture him and his few followers.

With regard to all those hardness and problems and enemies if the prophet PBUH faced a protested wife who nagged every day and all the times and asked him from sympathy or protest to stop this inviting to Islam in order to prevent facing insults and mocks. What a hard and strange situation could have happened! Pay attention that Khadija was the most noble and richer woman on Arab island.

But the God made the Khadija’s heart valves open in a way that she could understand the reality of Islam and made her full of knowledge and wisdom in a way that the prophet never faced the bad situation at home.

Yeah1! Khadija was the first woman who became Muslim and said prays with the prophet PBUH. There is no one else except Ali ebn abi taleb who have such Islam history.

The prophet PBUH never forgot Khadija after her death and talked about her personality and characteristics and had especial kindness to her friends. Ayesha has said: I did not feel joules to none of the prophet PBUH wives except Khadija. Because the prophet remembered her a lot. If a sheep was slaughtered, he sent it for Khadija’s friends.

Also Ayesha has said: the prophet whenever the prophet PBUH decided to left home at first he remembered Khadija and asked God blessing her and talked about her goodness.

Once upon a time I feel jealous of her and I told to prophet: she was an old woman and now the God had given you the better one.

The prophet PBUH became angry in a way that his front hair had shaken from anger, then he said (no, the God did not gave me the one better than her. She was the first one who believed me when all the people were pagan and subscribe to me when all others called me liar, she shared her wealth to me when the people forbid their wealth for me and God gave me the children from her while the other wives were deprived.)

In Sahihin has told from Ayesha: the prophet PBUH evangel the house in heaven which there will be no suffer and pains there.

Yeah! Khadija was the owner of all the good virtues and morals. All the Muslim woman must made her the guide and leader. Allah, bless her and her children and grandchildren and Imams.