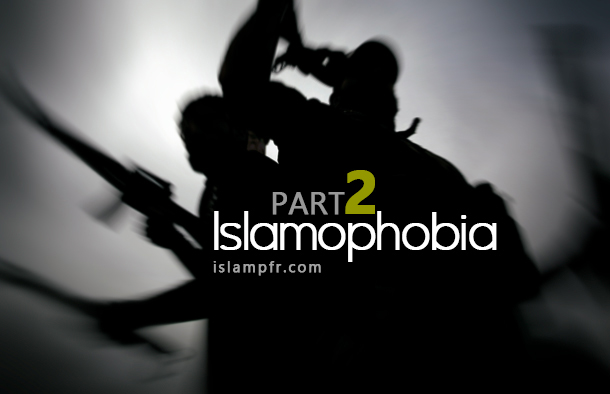 Signs and Manifestations of Islamophobia

Since the advent of Islamophobia which started with the Islamic conquests, the pathological phenomenon of Islamophobia has manifested itself in different ways from time to time. Some of these manifestations are as follows:

Since Muhammad’s appointment to his prophetic mission, people who have questioned the authenticity of his prophethood and invitation to Islam have never stopped. From the very beginning, Islam has come under attack from many Arab and Jewish tribes who hurt its Holy Prophet with all kinds of accusations like accusing him of telling lies, being mad, practicing sorcery, etc. Such accusations went beyond just the Prophet and extended to Islam as well.  Some of its enemies have accused Islam of being a material religion giving no attention to spiritual aspects of human life; a religion that promotes bloodshed and has been kept alive by the sword.

For instance, Voltaire, the famous French Enlightenment philosopher, wrote a play titled ‘Fanaticism, or Mahomet the Prophet’ in the mid-eighteenth century which was a direct assault to the Holy Prophet. Also earlier, in the thirteenth century, Dante, in his Divine Comedy, had depicted the Holy Prophet (PBUH) very inappropriately and this is what Salman Rushdie repeated in his satanic novel ‘The Satanic Verses’ which was published in 1988.

The cartoons published in the Danish newspaper Jyllands-Posten on September 30, 2005, could be analyzed in the same way. The newspaper published twelve cartoons mocking the Holy Prophet (PBUH) which many experts believed were of no artistic value. These cartoons were accompanied by an editorial in which the editor-in-chief expressed surprise and condemned the extent to which Muslims considered their prophet holy. He believed it was all nonsense and a delusion of grandeur. So, he called for Muslims to have the courage to break this taboo by exposing the dark history of the Prophet of Islam and the truth to the world public opinion.

Obviously, when we put this offensive editorial together with the cartoons, the conspiracy behind this evil act becomes clear that, contrary to the claims of the Danish authorities, this has not been something accidental, random, or unintentional.

It should be noted that publishing these cartoons was not the first of its kind and it was not meant to end there. For example, an English publisher published a book by Abdullah Aziz in 2001 which contained insulting cartoons depicting Muslims’ faith, the holy Quran, and the Prophet. These cartoons sacrilegiously depicted the Holy Prophet (PBUH), his wife, Aisha, and some of his companions performing Islamic rituals. Even God was depicted as a crescent sitting on His throne while the Prophet has prostrated himself.

Western countries, especially the colonialist countries, have an apparent greed for highlighting the sectarian divides in the Islamic world and turning them into conflicts. They try to ignite sectarian wars first among Muslims and then between Muslims and non-Muslim religious minorities. We can refer to France, for example, trying to divide Lebanon and raise sectarian tensions among the Lebanese people in the early twentieth century. Colonialist countries had earlier succeeded to divide the Arab world into smaller and weaker countries during the Sykes-Picot agreement in 1916. The same situation applies to the Iraq today which is occupied by the United States. Iraq is on the brink of a civil war which takes the lives of dozens of people every day, and the main reason is the tribal and religious conflicts in which the US occupying forces play an essential role.

Even, in some Western universities, subjects like religious conflicts and extremist sects are being taught.

Perhaps it all began with the cultural clashes with the Islamic world known as the Crusades. These wars were launched under the pretext of liberating the Holy Land, Jerusalem, from the hands of Muslims who were seen as heretics. The truth is that the crimes that the crusaders committed in the Islamic cities during the Crusades do not only reflect a pathological fear of Islam and its followers, but also their hatred and thirst for revenge. A priest who witnessed the occupation of Jerusalem by the crusaders in 1099 related that the crusaders searched the streets, city squares, and even roofs to quench their thirst with murder. They (the crusaders) were ripping people apart like lionesses whose young were kidnapped. They murdered and dismembered children and the young. They hanged so many people with a single rope. They would take everything on their way. They would even tear the stomach of the dead open to find a piece of gold in there. Oh, what a misery! There was blood flowing like a river down the streets covered with dead bodies.

It seems that such a crusading spirit that nurtures such an intense hatred towards Islam is still dominant in the Western world. This may be the reason for the West to want to fight with and subjugate Muslims. The Islamic world has always been subject to the Western greedy looks concealed behind the desire to promote Christianity and rescue this world (Islamic world) from backwardness and decline. This has been the excuse for the dozens of colonial attacks and conspiracies resulted in the occupation of most parts of the Islamic world and the collapse of its unity due to the fall of the Ottoman Caliphate in 1918.

Only a few years earlier, under the constant feeling of a possible threat from the side of Islam, England called for the formation of a committee consisting of seven Western colonialist countries in 1907. The purpose of the committee was to study and assess the potential threat of the Ottoman Caliphate for other countries. The committee came to the conclusion that the real source of danger for them were the Arab states of the Ottomans Empire and the Arab Muslims residing in those states. In the report presented by the committee, some ways were proposed to counter such a threat, some of the most important of which are as follows:

In order to achieve the above-mentioned goals, there was a need for a local government with enough power to stand against the orientation of the people of the region and in line with the interests of the colonialist countries. The spurious Zionist regime was the one to play this role very well. Today, there is a lot of evidence to prove that there is still a crusading mentality buried deep in many Westerners’ subconscious. When English forces occupied Jerusalem in 1917, the English General, Edmund Allenby, was the first Westerner to enter the city after the liberation of Jerusalem by Saladin. Upon entering, he made the remark “only now have the crusades ended.”

In 1921, the French General, Henri Gouraud, who had occupied Damascus with his forces, went to the tomb of Saladin, , and said: “Awake, Saladin. We have returned.”

The famous slip of the tongue of the then-US president, George Bush, who revealed his unconscious after the September 11 events by saying: “It is a ‘crusade’ on terrorism.” is an important sign that proves such mentality has become fixed in the minds of many Western politicians.

The , Flip Benham, in his missionary program, openly cried out that there should be a crusade against the evil to save the United States through exposing a lie in the name of Islam. He claimed that the Prophet Muhammad has killed millions of people since his coming at the beginning of the seventh century.

We can say that there is a positive correlation between the increase of Islamophobia among Westerners and the intensity of missionary activities.  It seems that the attempts to Christianize Muslims and letting them feel the ‘Christian love’ are some defensive tricks of the West to compensate for their hatred.

Today, many Christian missionary activities in the Islamic world, especially in poor countries that lack political stability, are being carried out intensely. For example, under the shadow of the US military presence and its allies in Afghanistan, there are more than a thousand American and European aid and development agencies with many different missionary activities. Such activities led Benham who was the minister of an Evangelical mission in 2003, to announce after his one-month visit to Afghanistan that his Christian doctrine of the Trinity has helped him a lot and he thinks the Christianization program will succeed.

Islam, which is the source and origin of a unique and distinctive civilization, is not a spiritual religion uninterested in the material world, but a pervasive religion encompassing all aspects of human life including political, economic, social, cultural and spiritual. Today, there is a critical need to introduce Islam to the world, but prior to that, it is Muslims who, as the descendants of the Islamic Ummah (nation), should know it very well. To introduce Islam to others, one should make use of Hikmah (wisdom) and Mau’izah al-Hasanah (words that touch the heart of the listener). The large number of people converting to Islam, in spite of the  current plight of Muslims, shows that humanity who has lost the way is seeking refuge in Islam as the final religion to put an end to its perplexities in the spheres of nihilism, absurdism.