Important Christian Interpretations on the Second Coming of Christ- Part 2 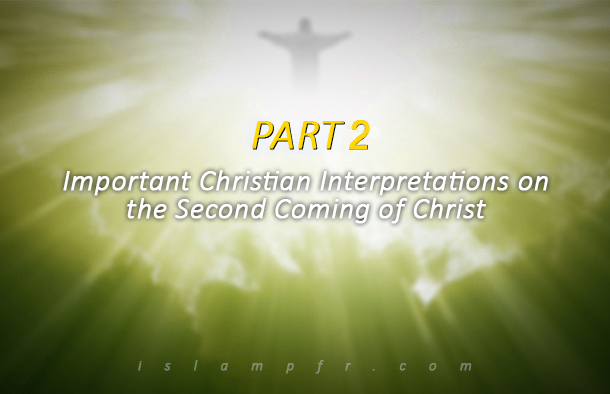 Important Christian Interpretations on the Second Coming of Christ

In his second letter to the Thessalonians, Paul faced the reality that was the natural consequence of the expecting the imminent end of the world. This fact is that some of the Christians in the Church of Thessaloniki, had stopped working and were living on others’ money because of their Apocalyptic beliefs. In this letter, Paul, in addition to accepting and repeating the belief of the Second Coming of Christ, warns people not to be unsettled by words of mouth or letters that are attributed to us —and assert that the Day of the Second Coming of the Lord (Christ) has already come. (2 Thessalonians 2:1-3).

In the following Paul expresses the incidents which occurs before the “The Lord’s Day” (the day of The Second Coming of Christ), (2 Thessalonians 2:4 and 8 and 9).

In this letter, Paul confirms the belief of those who expect the imminent Second Coming of Christ; however, he asks them not to develop their expectation to the extent which get them away from daily life. He also asks them not to stop working, and not to get disappointed as they face the delay in fulfilling the expectation of The Second Coming of Christ and not to cause a crisis in the Early Church with those consequences.

However Paul has been quiet at some occasions that he is expected to talk about Christ’s Second Coming. He talks about death as “crumbling of the earthly tent” and then obtaining “an eternal heavenly dwelling” that God has built it, in the Second Epistle to the Corinthians (2 Corinthians 5:1-10), but he doesn’t mention anything about Jesus Second Coming or the resurrection of the dead.

In this sentence, the death itself is the point that causes the Christian believer achieve the spiritual salvation. Also in his letter to the Philippians (Philippians 1:21-25) when he talks about the necessity of  his staying alive, he doesn’t see his surviving as waiting for the Second Coming of Christ and meeting him, but merely as an opportunity to serve Christians more, yet it results in his separation from Christ.

In total, it can be understood from Paul’s words about the Second Coming of Jesus Christ that on the one hand, he had a role in early church belief  of the imminent Second Coming of their savior, but on the other hand, since he felt responsibility and thought that with his dream and his Revelation he has been chosen as a special apostle of Jesus  to lead others and also since he was more educated than other apostles and had more foresight, he didn’t want waiting for Second Coming of Jesus prevent the growth and consolidation of the nascent Church.

Sometimes, he acted in a way as if he could guess that there is no news of the Second Coming of Jesus for long years. The twofold position of Paul can be observed in the Christian marriage topic as well. He wants church members to abstain from marriage because he believes “we have a very short time and a very little opportunity for doing what satisfies the Lord’s” (1 Corinthians 7:29).

But on the other hand, as someone who feels responsible for the mental health of the church followers, he permits everyone who likes to get married, get marry (Ibid. 7:36).

Also, it seems that his view about how Jesus Christ’s Second Coming is, and his view about the final salvation is different from other followers and the apostles of Christ in the early church. Unlike those who waited for physical and imminent return of Jesus Christ, he referred to spiritual salvation that perhaps has nothing to do with the physical coming of Jesus Christ in the Apocalypse. This approach became the basis of interpretations of people like Origen and Augustine. In the following we will discuss them.

Creeds are statements which begin with the phrase “I believe”) (and generally have been issued by the Christian Councils after the doctrinal disputes (McGrath 2005:55). In the Early Christian Church, two important Creeds were credible and were respected in all over the Church: the Apostles’ Creed and Nicene Creed. Both Creeds consists of twelve principles of the Christian beliefs that half of them, that is, six principles, are dedicated to Jesus and his Second Coming.

Maybe it can be said that this Creed is the most well-known and the most accepted Christian creed. This Creed consists of three major section about God, Jesus Christ and the Holy Spirit. It also includes some topics about the church, the Day of Judgment and the resurrection. The content of the Apostles’ Creed is as the following:

As you see, in the seventh paragraph of this creed after indicating of Christ’s ascension to the heaven, his Second Coming has been mentioned explicitly. In this creed, at first, some characteristics have been mentioned for Jesus Christ:

He is the only begotten Son of God, and He was born of the Virgin Mary by the Holy Spirit and at the time of a tyrant governor was crucified and was buried.

After expressing these characteristics, the authors of the creed point out the first resurrection or the first coming of the Christ and His resurrection from the dead and that he is currently alive and sits on the right side of God the Father.

Finally, to connect these topics that sometimes appear, seemingly unrelated, and to complete the Christian faith, they point out his Second Coming. This six-part series that constitute half of the Creed, state that Christology is not completed without understanding Jesus’ Second Coming and this doctrine is the one which gives meaning to the Christian faith. About our subject, there are interesting points in this creed including:

Council of Nicaea was held in June 325 CE at the invitation of Constantine, the first Christian Emperor, in the city of Nicaea (Iznik city in the modern Turkey) with the aim of resolving disputes concerning the Christology. This Council is considered as the first global council (in the sense of a council composed of bishops all around the Christian world that its decisions are mandatory and are considered as basis of all the churches) (McGrath, 2005: 57). In the Nicene Creed we read:

We believe in one God, the Father almighty, creator of all visible and invisible things. And in one Lord Jesus Christ, the only Son of God, begotten from the Father before all ages, God from God, Light from Light, true God from true God, begotten, not made; of the same essence as the Father. Through him all things were created; all things that are on the earth and in the heaven.

He came down from heaven for us and for our salvation; he was personified as human. He suffered and rose on the third day and ascended into heaven. He will have a Second Coming to judge the living and the dead. One of the noticeable points in the text of the Creed is introducing Jesus role in people’s salvation. . In This theological classic text Christ’s salvation deed has some steps:

So the Second Coming of Jesus is the final loop of his salvation deed for it he descended from heaven and was embodied; that is, if we omit Christ’s Second Coming from this cycle, believe in Christ will not be meaningful anymore.

Important Christian Interpretations on the Second Coming of Christ- Part 1

Important Christian Interpretations on the Second Coming of Christ- Part 3

Salam
With due regard to your Esteemed institutions, we are always enjoying your very very useful Islamic articles.
We are in multiple religious denominations in Northeast part of Nigeria in West African Continent . We have Inter/Interfaith Mediation Organization, we want your moral and material support, The post of Common ground is mportant.
We would be glad glad if our request is considered.
Yours in Faith.
Muhammad Alhaji Gana
Secretary
Ahlul-Bayt (as) Peace Foundation
P. O. Box: 5693, Maiduguri,
Borno state,
Nigeria
WhatsApp: +2348022032389

Dear brother
Nigerian Muslims are our brothers and sisters. also great Sheikh Zakzaki is so respected for us.
it is our honor to cooperate with you
Inshallah we will be in touch soon