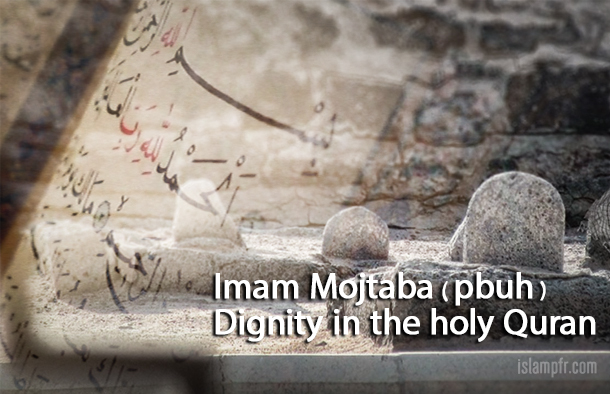 “If anyone disputes in this matter with thee, now after full knowledge has come to thee, say: come, let us gather together, our sons and your sons, our women and your women, ourselves and yourselves. Then let us earnestly pray, and invoke the curse of Allah on those who lie.”

Hadith narrators have narrated in various ways that this Holy Verse was revealed concerning the dignity of Ahl al-Bayt (Peace Be upon Them) which include: Prophet Muhammad (PBUH), Ali ibn- Abi Talib, Fatima al-Zahra, Hassan and Hussein, and the word “sons”, in the verse, undoubtedly refers to Imam Hassan and Imam Hussein (Peace Be upon Them).

In this historical event Prophet Muhammad (PBUH) said that the people along with whom he performed Mubahala are the best people of the world and the most respected ones to God. Accordingly, Prophet Muhammad (PBUH) performed Mubahala along with them, and the priest of Najran confirmed their dignity too and said: “Today, I encounter people who if they ask God to move a mountain, He will do it.”

Like the Mubahala verse of the Holy Quran, this story also implicates the high dignity, excellence and superiority of Ahl Al-Bayt and they are named as the most admired people to God and the prophet Muhammad. And other people will never reach their dignity, virtue and excellence.

In the Holy Quran, God has never talked directly about impeccability of anybody except prophet Muhammad (PBUH) and his Ahl al-Bayt by stating that God has willed to remove any kind of impurity and uncleanliness from them. Although Muslims have different opinions about whether prophet’s wives are considered as members of Ahl al-Bayt or not, they all agree that Imam Ali, Fatima al-Zahra, Hassan and Hussein are the members of Ahl al-Bayt.

Accordingly, we can perceive the hidden secret of favouring Ahl al-Bayt and being steadfast to their policy and as the Quran explicitly mentions it, we should prefer their love to others; because their impeccability is the best reason to know that following them in different situations will lead to our security and salvation when there are various opinions and different topics. The people whom God saved from impurity, guide other people through salvation and their followers will be saved from damnation. / going astray.

Holy Quran describes Ahl al-Bayt dignity and their purity in praying and obeying God in Surah Al-Insan, and explains the reason of their superiority and virtue:

We feed you for the sake of Allah alone: no reward do we desire from you, nor thanks. We only fear a day of distressful wrath from the side of our lord. But Allah will deliver them from the evil of the day and will shed over them a light of beauty and joy, and because they were patient and constant, he will reward them with a garden and garments of silk. (2)

According to many interpreters and commentators, this Holy Surah was revealed for the sake of Ahl al-Bayt when Hassan and Hussein (Peace Be upon Them) suffered from an illness and Imam Ali made a vow that if they recovered, he would fast for three days. Therefore, the members of the family abided by their words devotedly when their sons improved. They took their vows with such devotion that the following verse was revealed to manifest their dignity:

As to the righteous, they shall drink a cup of mixed with Kafur, a fountain where the devotees of Allah do drink, making it flow in unstinted abundance, they perform their vows, and they fear a day whose evil flies far and wide. (3)